Anything that I do these days is done with sharply divided feelings. Going to a bar, seeing a movie, chatting and laughing with friends. How can we do these things when so many people, so close by, are suffering so greatly? I should not be laughing. Or I should be? Should I be helping in New York City? Should I be mournful? There is no past reference to gauge these days against.

In the afiermath of the Sept. 11 terrorist attacks, many readers were anxious to share their thoughts about the horrific events and potential consequences. A sampling:

How should we feel?

As a Canadian of European Christian background, I was outraged to learn that some vicious thugs who to my everlasting shame share my ethnic and religious heritage have attacked and threatened members of the Arab and Muslim communities in Ottawa. I would like to take this opportunity to announce to my Muslim compatriots and to my compatriots of Arab origin that I am ready to personally stand guard at mosques and churches and at businesses and homes belonging to members of the Muslim and Arab communities, and to escort their children to school, to the extent that my schedule permits it. Mark Marshall, Ottawa

What’s next? How and when will the next assault come? Will it be nuclear, biological, chemical, cyber or something else, as yet beyond our imagination? If we knew, we might be able to take action now to prevent or reduce its effect. How can we find out? Perhaps a special think-tank Web site, dedicated to publishing and discussing defence ideas, might be useful in this regard. People could post their ideas, no matter how off the wall they may seem. Others, perhaps with specialized knowledge, could further refine those concepts. Only last night at the dinner table a young lady asked the question: why cant ground control take over an airliner that has been hijacked and bring it in to land? We have the technology. Upon a discreet signal from the captain or perhaps the unauthorized opening of the flight deck door, a black box would kick in, disengaging the normal flight controls and allowing ground controllers to take over. The idea is pretty good. Maybe some technocrats out there could pick it up and refine it. EricV. Mold, Vancouver

Let me express my heartfelt thanks for the sympathy, solidarity and love shown by Canadians—our wonderful neighbours to the north. Watching the service on Parliament Hill with more than 100,000 people was overwhelming. It brought back wonderful memories of my two weeks in Ontario and Quebec two years ago. I’ll be taking the large Canadian flag that I came home with out of storage and displaying it on Canada Day.

Our memorial service on Parliament Hill was dignified and sincere, but left many with deep regret that no public prayer was offered, no mention was made of divine compassion and capacity to heal. How different was the service in Washington that, respectful of other faiths, nevertheless gave pre-eminence to the one on whose principles the great American nation, and our own, were built.

Project Unity is our idea to unite with those in New York, Washington and every place where the pain and shock of Sept. 11 has been etched in our lives forever. We ask that everyone make red-white-and-blue ribbons and put them on our clothes, car antennas, buildings, trees (especially old oak trees), and everywhere to be seen by all. In this small way, we hope that the feelings of unity will help us all grow closer together so that we may find some light in these dark days.

The religious zealots responsible see themselves as the hand of Allah, acting in revenge against the evil Christian West. They expect us to respond in kind, setting off a chain reaction of revenge for revenge that will trigger the prophesied Armageddon, from which they will enter heaven as heroes. They believe our Christianity is more a means of doing well than doing good. U.S. President George W. Bush’s Christianity faces the supreme test. Unless his actions are guided by what Christ would do, which is the only response that can confound the terrorists, he may well become their instrument in the destruction of Earth.

Although I do not condone the horrific violence inflicted upon the people in the World Trade Center, I am starting to wonder if we don’t need to put this tragedy into perspective. Many more people perish in the Third World every year due to preventable medical problems and simple hunger, yet we do not have continuous,

At a turning point

Terrorism, military strikes, destruction and war can no longer be the solution to our problems around the world. Over the thousands of years that we have been recording history, we have been deluded into thinking that might is right, and that it is possible for powers to rule the world. This has been proven wrong in every case. Every single colonialist, empire and superpower has fallen. It is time for us to see the world as it is, with human, international consequences for every action. For the love of our children, please let us move on to the next dimension as the human race. If we fail, perhaps the fate of the dinosaurs awaits us.

around-the-clock coverage of these events. Do Americans and even Canadians think our tragedies are so much more important than those of other peoples that we can focus on our own problems while neglecting the plight of millions of desperate souls in the Third World?

In the wake of the catastrophe endured by the United States, it must be obvious to all Canadians that our government has become both impotent and vulnerable. Impotent because it has failed to respond to even the basic domestic problems Canadians continue to endure. Vulnerable because our national security mechanism is unable to respond to any internal or external threat to our collective security. Canadas military, domestic security and immigration policies have become a national and international disgrace.

Like most Canadians, I am angered with the apparent impunity in which terrorists appear able to act. While the horrific events of last week will undoubtedly lead to some form of military retaliation (indeed such action would be considered by most to be entirely justified), one hopes that such actions will be measured in order to minimize the impacts on innocent victims. At the same time, democracies around the world should consider closing their borders to all nationals of those states that are known to support terrorism groups. An economic blockade of terrorist states should be considered, including the immediate elimination of all foreign aid to these countries. Only those originally from terrorist states with legitimate citizenship status should remain in democratic countries. All others should be deported. I realize these measures are extreme, but under the circumstances these rogue states should not expect normal treatment from the world community.

Perhaps it is time that we as a modern society put religious beliefs into the pious and quiet places where they were meant to be and not at the forefront of international politics and socioeconomic considerations. Everyone has the right to believe— or not—in the faith of their choice, but

that right cannot supersede our right to live in peace and to have a free society in which we can feel safe and secure.

Islamic, anti-American, environmental, anti-globalization and socialist terrorism is directed at the same target—capitalism. These religious and secular fanatics hate capitalism and all countries that practise it. These terrorists thrive on hate and altruistic self-sacrifice. Their mission is to eradicate capitalism and to return us to the Dark Ages. If we wish to preserve our Western values, we need to defend capitalism against all its foes—both militarily and intellectually. An intense and prolonged military attack on the countries that willingly harbour Islamic terrorism will go a long way to deter future terrorism from those countries. In addition, and perhaps more important, this defence must include a constant rational debunking of all harmful ideas, including altruism, appeasement and compromise (of principle).

When persons, perhaps under contract, kill many people in a single heinous act, the crime is murder and society must unleash all the forces required to bring the perpetrators to justice. If family and friends of the victims and other individuals wish to forgive said perpetrators, their wishes must be ignored, otherwise society’s laws become

Send letters to the editor to:

See our Web site for more letters on the Sept 11 tragedy and other issues raised in Maclean’s:

a sham. I hope the perpetrators can be taken alive and a punishment to fit the crime meted out. If I had my druthers, the guilty would not be subject to a clean, clinical termination as granted to the Oklahoma bomber. Instead, they should be taken to a high building slated for imminent demolition and be restrained there while the building is demolished upon them. Barbaric? Uncivilized? Go back to your television sets and look again at the pictures of the airliners, carrying hundreds of innocent people, slamming into the World Trade Center towers.

So, Canada has purportedly joined the war against terrorism in all its forms. If indeed actions speak louder than words, I wonder what our stand will be against former FLQ members and their modern-day cronies who so freely walk in our society? Ray Spruzenieks, Beaconsfield, Que.

Canada is a working model of democracy, compassion and strength for the world. We must be firm in our resolve not to change our uniqueness and Canadianness. Of course, we must work with other countries to eradicate terrorism. But our Canadian ideals must not be compromised. This was an attack on the U.S. in response to its foreign policies and atrocities that have been caused as a result of its actions. While we condemn these attacks, Canada must recognize and optimize its opportunity to show leadership to the world in our constant search for peace and real democracy. 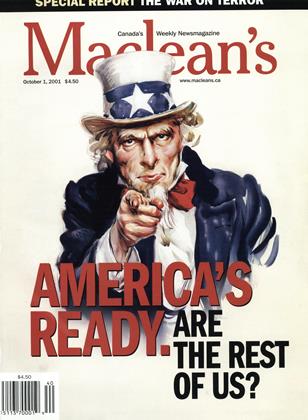