Twenty-five years ago, a long-haired teenage busker was playing the accordion and swallowing fire in the cities and towns of his native Quebec. Then one day, Guy Laliberté had an idea for a new kind of circus that would do entirely without animals. Traditionalists scoffed, but today Cirque du Soleil entertains six million people annually on four continents. Last week, a balding Laliberté stood on a Toronto stage in designer leather jeans and a T-shirt as 700 people gave him a standing ovation. Many of them had forked out $ 175 (dinner included) for a chance to pay tribute to one of the most extraordinary Canadians in entertainment history. Bowing, waving, balancing a yellow rose on his chin, the former street performer, now 42, certainly seemed to be enjoying himself.

Laliberté’s appearance marked the launch of World Leaders: A Festival of Creative Genius. Mounted by Toronto’s Harbourfront Centre, the festival is a groundbreaking event in its own right— an ambitious celebration of the lives and work of 14 of the most important artists in the world today. Like Laliberté, all the honorées receive a $25,000 award and a sculpture, as well as a tribute featuring everything from video displays of their work to live performances and interviews. One guest, Japanese fashion designer Issey Miyake (Nov. 6), will show off his latest creations in the presence of one of his most enthusiastic collectors, Gov. Gen. Adrienne Clarkson.

Boyle and Toronto design pundit Bruce Mau created the festival pardy as a way to draw attention to the work of Harbourfront, which for 27 years has offered Canadians an incomparable view of domestic and world culture, with a steady influx of writers, musicians, dancers, theatre artists, painters and sculptors. Chronically underfunded by government, Harbourfront got corporations to pony up more than half of the event’s $2-million budget (public funds and box office will cover the rest). Boyle sees the festival as a cross-disciplinary feast that showcases Harbourfront’s depth, while celebrating the ongoing creativity of its guests. “We don’t want this festival to smack of a lifetime achievement award. We want this to be an exploration of the creative process. In fact, all these artists are still incredibly active. None of them want to talk about their past.”

Still, the past is important, so the audience for the Laliberté evening was bombarded with images from four suspended video screens: cameos of the clowns and acrobats who over the years have revolutionized our idea of what a circus is with fluid, highly choreographed acts that owe as much to theatre as to the big top. There was live entertainment, too, the most vivid moments coming from Cirque juggler Viktor Kee. Clad in a see-through body suit, he kept seven balls on the go while simultaneously moving with a quicksilver stylishness that seemed superhuman.

Despite such delights, a surprising amateurishness often held sway. Former Olympic synchronized swimmer Sylvie Fréchette (a contributor to O, Cirque’s Las Vegas-based aquatic show) played host, awkwardly reading from a prepared script. Her interview with Laliberté was a bust; the best she could extract from him were a few thin anecdotes and some clichés about reconnecting to the wonder of childhood. So much for the festival’s promised insights into the creative process. Praise for Laliberté hung in the air, perhaps a bit too heavily, as the audience was constandy reminded by the video screens and various speakers what a marvel he is. All true enough, no doubt, but wearying after two hours. By forcing its message, the opening night of the festival of genius undermined spontaneity with propaganda, a pitfall any true creator would avoid. 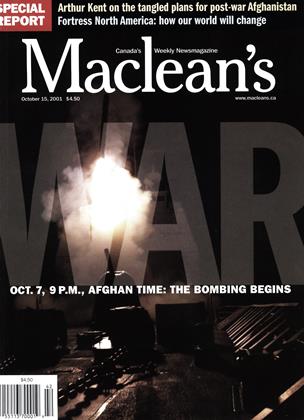