Two years ago, Montreal native Debbie Williams and her husband, Darren, moved to Hoboken, N.J., after being transferred to New York City by their employer, Aon Corp. A graduate of LaSalle Protestant Comprehensive High School, Debbie, 35, had worked for the global insurer for 15 years. The couple settled in the small city, just across the Hudson River from New York, so they could be close to Aon’s World Trade Center offices. Six months after the move, Debbie gave birth to their only child, Payton. The family, like several others who lost loved ones, declined to be interviewed. a

Rufino (Roy) Santos, a computer consultant, was wrapping up a project for a client on the 94th floor of the World Trade Centers north tower on the morning of Sept. 11. The former Vancouverite, praised by his boss as an “exceptionally fast learner,” had emigrated to Vancouver from the Philippines with his mother and two brothers in the 1980s, when he was in his teens. But in 1996, career opportunities and his enthusiasm for arts and culture drew him south of the border. “He loved New York City—Broadway, the museums,” says his mother, Aurora, who still lives in Vancouver. “He would always take me to the best shows and finest restaurants. He was very thoughtful.”

Aurora is planning a memorial service for her middle son in Manila on Feb. 19, on what would have been his 38th birthday. m

Jane Beatty, 53, spent the first four years of her life on the Isle of Man before moving with her family to Toronto in 1952. In the early 1990s, after marrying Bob Beatty—whom she met on a blind date while visiting a friend in New Jersey—she moved to the U.S. and worked as a technical supervisor at insurer Marsh & McLennans World Trade Center offices. Never a citizen, Beatty still had strong ties to this country. After her death, a colleague wrote her two Canadian sons from an earlier marriage that their mother “was a very special woman—Canadian, as she would like to remind you.”

Her elder sister, Joanna Chrystal of Toronto, remembers Beatty best for her “wry sense of humour.” Both breast cancer survivors, the two last got together in early August for the world dragon-boat championships in Philadelphia. Says Chrystal: “We had a ball.” m

From the moment Irinie Elmarry met her husband-to-be at his brother’s Cairo wedding in 1998, she sensed a bond. “I felt like I had known him from a long time ago,” she says. Albert—or Biro to his friends and family—was born in

Egypt but had lived in Toronto since 1993, pursuing computer studies and then working for IBM Canada.

The couple married a year after they met and moved to the New York City area where he worked for bond trader Cantor Fitzgerald in system support. At the time of the attack, Irinie was three months pregnant

with their first child. Her 30-year-old husband, she says, was “a little bit nervous, but very happy” at the prospect of fatherhood. Having taught Sunday school at their Coptic Orthodox church, Elmarry was fond of children. His deep spirituality, says Irinie, is of great comfort these days. She adds: “I’m sure he’s happy now.” ■

The remaining stories of the Canadians who died in the Sept. 11 attacks

When Maclean’s began preparing its Oct. 29 “In Memoriam” issue to pay tribute to the Canadians who lost their lives in the World Trade Center on Sept. 11, we contacted Foreign Affairs for help. The department had the official list of Canadians who died in the terrorist attacks but, citing federal privacy legislation, it refused to release the 24 names-or contact family members to ask if they wanted to be included in our cover package. Nevertheless, we at the magazine tracked down 16 of the victims, talked to some of their families and told

their stories in our Oct. 29 issue, the first time this had been done.

After the magazine appeared, Foreign Affairs changed its tune. Reynald Dorion, a department spokesman, told Maclean’s that the “In Memoriam” issue sparked a policy review, fuelled by pressure from competing media. Foreign Affairs contacted the families of victimsincluding one who grew up in Canada but never became a citizen-and all, Dorion said, agreed last week to have their names made public. Now, we can tell the rest of their stories. Michael Benedict

Chantal Vincelli was setting up a display for a trade show on the 106th floor of the World Trade Center’s north tower on Sept. 11. A 38-year-old marketing associate with DataSynapse Inc., the former Montrealer moved to New York five years ago. “She always loved the city,” says her younger brother, Tony Vincelli. “Even when she was 14, she would say, ‘I’m going to New York. I’m going to be famous one day.’ ” Vincelli remembers his sister, a former communications student at Dawson College, as someone with “spunk who could talk her way out of any situation.” He adds: “She had so many friends and she loved people. She made everybody feel comfortable.”

In Montreal, Vincelli had worked as a volunteer for an AIDS foundation. “She also took in stray cats and dogs,” says Tony. “She had a pure heart. She was an amazing person.” m

Michael Egan left Hull, England, 33 years ago to follow his sister Christine to Canada. But in his heart, he never wandered far from his birthplace. “He loved to collect things from Hull,” says his wife, Anna, whom he met in Montreal in 1973. “Books, plates, cups, you name it, he had it.” As well, the 51-year-old Aon Corp. executive remained close to his older sister—a Winnipeg nurse who was visiting his World Trade Center office and also died on Sept. 11.

The Egans moved with their two boys, Jonathan, now 18, and Matthew, 16, from Montreal to the New York City area in 1991. Michael, says Anna, spent much of his spare time introducing Matthew, who has Down’s syndrome, to a variety of sports—-activities that produced six Special Olympics gold medals. Egan’s “passion,” she adds, “was to make Matthew as happy as he could be.” ■

ernard Mascarenhas was the head of systems and technology at Marsh Canada Ltd., an insurance brokerage firm. Mascarenhas lived in Newmarket, Ont., with his wife, Raynette, worked in Toronto, and was on a five-day business trip to the New York City offices of parent company Marsh & McLennan on Sept. 11. The 54-year-old was visiting the firm’s technology department on the 97th floor of the World Trade Center’s north tower during the attack. While all of the Marsh & McLennan employees in the south tower were evacuated, 291 of Mascarenhas’s colleagues in the north tower also died. He leaves a son, Sven, and a daughter, Jaclyn. ■

Stuart Lee always seemed to be in a good mood. The 30-year-old vicepresident of software firm DataSynapse loved life and was determined to enjoy it fully, according to work colleagues who also cited his generosity. Born in

Korea, he moved with his family to Vancouver. He eventually settled in New York City with his travel agent wife, Lynn Udbjorg, and the couple travelled extensively around the globe—through Asia, Europe, South America and Africa— during their four years of marriage. Udbjorg described her husband as a romantic,

one who enjoyed good food and was active in several sports.

Lee, who received his bachelor of science degree in operations research and industrial engineering from Cornell University in Ithaca, N.Y., was at a conference on the 106th floor of the north tower when American Airlines Flight 11 struck. * 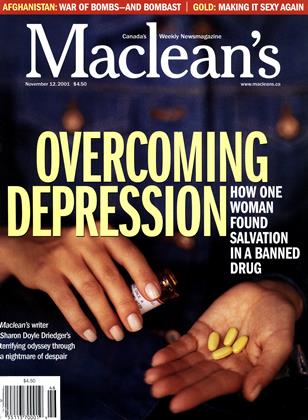