BY JULIAN BELTRAME in Ottawa

It was serendipitous that Justice Minister Anne McLellan happened to unveil her sweeping anti-terrorism bill on Oct. 15. As she introduced the 171-page omnibus bill inside Parliament’s Centre Block, RCMP officers outside were unfurling yellow plastic tape carrying the ominous warning: “Caution chemical hazard.” The security measure was in response to an anthrax scare—later proven false—after two Parliament Hill workers came down with skin rashes while handling mail. “People who live in fear of their personal safety cannot live in a free and democratic society,” McLellan intoned gravely. Given the still-fresh memories of

the Sept. 11 carnage and spreading fears of bioterrorism, few argued with her assessment of the deadly threat.

A month later, the world remains a scary place. But the mostly positive early reviews

have given way to a rising chorus of criticism, ranging from quibbling concerns to outright denunciation. The attacks

reached a crescendo last week when spokesmen for 650,000 Muslim-Canadi-

ans, who say their communities are already

facing a backlash because of Sept. 11, characterized the bill as open season on them. They recalled how Canada treated Japanese-Canadians during the Second World War—and claimed the same thing could happen to them. “You might as well delete the Constitution from our landscape,” Rocco Galati, the combative lawyer representing the Canadian Islamic Congress, told a Commons committee.

According to civil rights activists, Muslims are not the only ones who should be concerned. With McLellans anti-terrorism initiative, they say, police will be able to trample on rights all Canadians have long taken for granted. The bill gives investigators powers rarely contemplated in Canadian law. They include allowing police to detain terrorism suspects for 24 hours without laying a charge—with a possible extension of up to 72 hours. As well, Canadians could be compelled to give sworn evidence about possible terrorist activities. “I was a prosecutor, so I know what’s going to happen,” says Joseph Magnet, now a constitutional law professor at the University of Ottawa. He says that police keep watch on some 350 people who are either suspected terrorists or thought to have ties to terrorist groups. “They are going to round them up and ask them, ‘Who are your friends? What do you know?’ If they don’t answer, they’ll detain them.” Magnet, who has given testimony before Senate and House committees studying McLellans bill, believes it could allow police to open up a debate about the use of physical force on suspects. Such measures are hard to imagine under present circumstances, he admits. But suppose police have evidence that a horrific terrorist act is days or hours away—and have an uncooperative suspect in custody. “If we’re sufficiently frightened, physical means could

be used on these people to get them to answer,” he says. “I don’t think this is who we are or who we want to become.”

To be sure, most criticisms have been more measured. Still, McLellan is worried enough that she complained to Macleans in an interview that the media is playing up outlandish claims while largely ignoring the positions of those who support the legislation, like Jewish groups. “What appears to be going on here is the reporting of criticism about the legislation and under-reporting of the pretty strong support for this legislation,” she said. The justice minister conceded, however, that she is willing to listen to all arguments before her package goes before the House for a final vote, perhaps by early December.

But there are, so far, no signs that the sprawling bill will be substantially altered. McLellan contends that she’s walking the

fine line between addressing the country’s legitimate security needs and protecting civil rights. She notes that the police have extraordinary powers now, yet rarely abuse them. The police need new tools, she insists, because unlike most laws that are designed for after a crime is committed, the anti-terrorism act must catch criminals before they strike. “Yes, it calls for a change of mind-set,” she argues. “If there’s anything we learned on Sept. 11, it’s that if the terrorists are on the plane, it’s already too late.”

Any amendments that are in the offing appear to have more to do with how the bill is implemented, rather than watering down the new powers it creates. That was the thrust of a Senate committee headed by Liberal Joyce Fairbairn, which on Nov. 1 tabled its report on the law to approving reviews from the Canadian Alliance and the Progressive Conservatives. More important, McLellan called Fairbairns report “a useful document,” a clear indication the government is willing to mollify what it considers reasonable critics.

The Senate report would place a fiveyear sunset clause on many aspects of the bill. It calls for additional review mechanisms to guard against abuses. For instance, the committee wants Parliament to appoint an independent officer to monitor how the new powers are being exercised. As well, any unco-operative terrorist sus-

pect who was arrested but not charged under the new law would get speedy appeal of court-ordered bail conditions. And the Senate report urges an independent review of the list of terrorists the government would draw up under the act. Finally, the report proposes that the Federal Court be empowered to review any decision by the government to use the laws secrecy provisions to hold back information normally available under the Access to Information Act. “Ifwere going to have special powers, we need special safeguards,” Fairbairn said.

Such checks and balances—even if they are all adopted—won’t satisfy McLellans most vociferous critics. But she is not about to back down from the legislations aim of “defeating terrorism and making sure those who support terrorism don’t find succour in this country.” She’s confident most Canadians fear extremist attacks more than theoretical abuses of power. Should terrorists strike again, that sentiment will be reinforced. And civil libertarians and others must hope their worst fears don’t come true. ES] 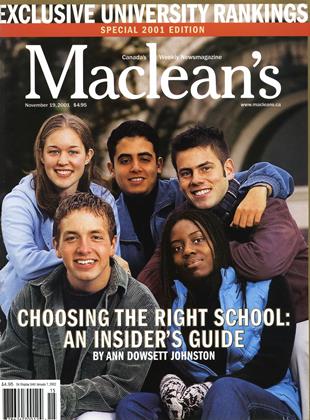