On Sept. 7, Jack Welch, one of the world's most admired—if controversial—business leaders, stepped down as chief executive of General Electric Co. The son of a railroad conductor, Welch was hired by GE in 1960 as an engineer. During his 20-year tenure in GE's top job, he transformed the sleeping giant into a dynamic global force— an industrial and financial services conglomerate that created more shareholder value than any other company in North America. Welch, on tour to promote his first book, Jack: Straight from the Gut, met last week with Maclean's editors and writers for an exclusive interview. Excerpts from the conversation:

Maclean’s: In the wake of Sept. 11, do you fear for American companies, or their image abroad?

Welch: No. I don’t think this was an attack on America. I don’t think it’s an attack on business either. If you believe what you read, the Eiffel Tower was a target two years ago. I see this as an attack on a way of life. Still, there isn’t anybody who hasn’t been shaken to some degree by this; it’s horror beyond belief. Maclean’s: How do you regard the business environment after Sept. 11?

Maclean’s: Do you think there will be an impact on how businesses are run?

to move. And there’s never been a change of the magnitude, at least in my lifetime, of this one. Lots of assets are selling at prices that were a fraction of what they were before. Lots of companies are cash starved as banks don’t want to take risks right now. Maclean’s: Were told you never liked the nickname Neutron Jack—given to you after you cut roughly a quarter of GEs workforce, or 100,000 people. What can you tell us about turning a company around with the massive cuts you made?

Welch: Most people forget 1980, when the economy was in terrible shape. The Japanese were going to take over the world, our president said America was in malaise, and inflation was at 20 per cent. We were making things in the U.S. that cost more than the Japanese were selling them for. Like most American companies, we had built a militaryindustrial complex. We had the CEO at the top, like a general, and we had these layers and layers and layers of bureaucracy on top of people. We had people writing reports to each other. Instead of growing, we were managing growth. I just thought that we had to get the people off the people. We had to clear out the overheads and we had to get in businesses that could be more competitive. I couldn’t sit there and preside over the demise of the company.

Maclean's: You have a predilection for weeding out from the bottom. Can you tell us more about your thoughts on that?

Welch: The whole thing is about raising the bar all the time. Your top 20 per cent of people have to know they’re your top 20. It’s particularly true now in tough times. You have to shower more love and hugs on them in tough times than you do in normal times. The bottom 10, they’re told every day they’re the bottom 10. They’re told in their raises, in their appraisals, they’re told they’ve got to improve or they go. If they don’t improve, they generally go on their own. Preferably, I want to do it before they’re 30 old. Every time we let someon our payroll beyond the age of 35 or so, who we know is going to be a poor performer, that’s a weak management system. I call that false kindness.

Jack Welch, the legendary exec who turned around GE and earned a mere $120 million (U.S.) last year, talks about management, money and Sept. 11

Maclean’s: Your compensation last year was $120 million [U.S.]. Do you think American CEOs are overpaid?

Welch: Am I worth $120 million? Somebody thinks so. But I’m not going to stand up here and defend the $120 million.

Maclean’s: You’ve gotten to the stage where the compensation itself is obviously not what motivates you. How hard is it to set a new bar for yourself

Welch: It’s wanting to win. It’s in the genes. And I love to learn. It’s like this book: I had to kill myself doing this book—I pretty nearly did—and now I may kill myself trying to sell it. Most writers like the process of writing and creating the book; I like the gregarious part of selling the book. I went to a book convention in Chicago with 3,000 people. We had a reception with the people who own small bookstores all over America. They had patches on their sleeves; they smelled like libraries. I love these people—I was hugging them. And the money is all going to charity. There isn’t a nickel coming to me, not a nickel. I feel totally guildess in promoting the book. Maclean’s: When you come to Canada, is there a sense of being in a different place or is it a market you feel you know well?

Welch: I feel very comfortable here. We’ve got a $ 5-billion business here, but it’s not huge, by any means. We’ve had support for everything we’ve done. It doesn’t feel like another country. It may be a disaster to say that here.

Maclean’s: Before Sept. 11, there seemed to be

an increasing amount of stress between the U.S. and Europe over huge American companies emerging there. For instance, the European Commission last spring blocked your $45-billion deal to take over Honeywell International. What’s your opinion?

Welch: One of the things the media have missed is that Europe is a brand-new country. It’s seven to eight years old, and everyone really forgets that. They think of Europe as old, and the U.S. and Canada as new, relatively speaking. Sometimes Europe is behaving like seven-year-olds do. I don’t think it’s a U.S.-Europe thing. It’s a country trying to feel its oats.

I have a little vignette that I think is cute: Romano Prodi is a guy I’ve known for a long time—he’s the president of the European Union, as you know—and I was visiting with him in Italy during the midst of this thing. I said, “Romano, how do you like your new job?” He’d been prime minister of Italy, and he said, “Jack you can’t believe how much fun this is. We’re making up new laws every day. Were printing a new currency.” And I’m thinking to myself, “Geez, he’s excited about new laws and I’m trying to live through this?” In a nutshell, you’ve just seen a seven-year-old. Ifs a maturing process. The people in the EU that dealt with us could not have been more decent. They just didn’t like the merger. But the EU is less than a decade old, with a population of 380 million and new laws being formed on top of a country structure. It’s never happened before. Maclean’s: You are a big proponent of the Internet. Do you have any sense of where the Web, and technology in general, is going?

Welch: I always said this was made for big companies. It makes the slow fast, it makes the old young, it makes the obscure transparent. It just changes how we do business. There will be a lot more and it will be a lot faster. You know what’s interesting to me? When I mourned Jack Kennedy’s death, I cried for a weekend. I did it in front of a television set. Thirty-eight years later, with all this talk about technology, I sat in front of a television set practically for a week and cried and got proud and cried over this tragedy. Has television ever been closer to you—or print or magazines? It’s wild. Everyone has run to pictures, run to the set. These were supposed to be obsolete. Maclean’s: Canada is the land of the small and medium company. What are the principles you have espoused that translate to running a company of any size?

Read more of our interview with Jack Welch online 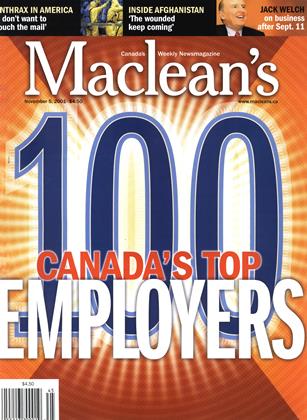