The rickety old truck wheezes to a stop on the war-torn side of the Afghanistan-Pakistan border—the end of the line for its desperate human cargo. Abdul and Feroza Qayyum, their two children, Ali, 7, and Sharifa, 2, and the three orphaned kids travelling with them scramble to the ground with their worldly goods—a gunnysack of clothes and two filthy quilts tied up with twine. Although they are dirty and exhausted after their two-day journey from Kandahar, there is no time to rest. They immediately stagger forward on the final half kilometre of their dangerous flight, towards the small hole in the razor-wire fence marking the border— one last obstacle separating them from refuge in Pakistan.

of sharp metal, they make it across. Now they face a new struggle for survival, as they join almost 4,000 hungry, exhausted refugees in the Killi Faizo refugee camp on the Pakistan border. The Qayyum family, like thousands of others, is on the run from the war against the Taliban and the American bombs that have rained down on their villages, not to mention the drought that has afflicted the country for four years. For the next six hours they go through a registration process that seems agonizingly slow. The wait is made worse by Sharifas illness. Barefoot and wearing just a threadbare cotton dress, she is painfully thin, coughing and suffering from exposure from sleeping in the desert with just a worn blanket to keep her warm. Feroza, wrapped in a black chador, comforts her daughter while her worried husband tells Macleans, “For my childrens safety we de-

cided to come here. I had two sacks of wheat left and sold them to pay for places on the truck that brought us here.”

Fiundreds of Afghan children have already died this fall. And according to Jeremy Flartley, UNICEF’s emergency communications officer in Islamabad, another 100,000 will perish in the coming months if aid does not reach them immediately. But with Afghanistan in turmoil, and with bandits patrolling the roads, thousands of tons of food and medical aid remain in warehouses on the other side of the country’s borders in Iran, Pakistan and Tajikistan. There is even a shortage of food in the refugee camps. At one camp Macleans visited, recent arrivals had not eaten in two days; at another, they had run out of clothing.

There are already tragic signs of the disaster to come—new children’s graves, small mounds of earth covered with rocks and marked with coloured pennants and bits of metallic string. The children don’t cry much on their way to death. They quiedy slip away in their sleep, or while waiting for the kindness of strangers. “It’s a very anonymous process,” says Hartley, “this business of children dying in war zones.”

Like Sharifa, most of the children are malnourished, underweight and suffering from exposure, both in Afghanistan and the refugee camps. A measles epidemic also swept through the country; now, a deadly wave of polio is adding to the death toll. In just the three hours it took Macleans to accompany the Qayyums from their truck across the border, and finally to tent No. 52-S in the Kill! Faizo camp, two children died.

If they are lucky enough to escape disease and starvation, children are still at risk of becoming victims of the massive U.S. bombing campaign. Often far from help, they usually can’t get to a medical centre soon enough and die from their wounds. At the Sandeman Provincial Hospital, in the western Pakistan town of Quetta near the Afghanistan border, 65 people have been treated for bomb injuries. Elevenyear-old Sath Mohammed was playing outside with his sister, Permenia, 7, near their home in Khartoot, when they heard the planes coming. “We ran to the house,” says Sath. “Suddenly, there was a loud explosion. I fell to the ground, then I don’t remember what happened.”

Now he is lying in bed No. 11, trying to be brave in this hospital with its Kalashnikov-toting guards and dizzying anesthetic fumes. The bandaged stump of Sath’s amputated leg is propped on a pillow, but he says it’s the other leg, the one with a ragged row of stitches running from his calf to his groin, that hurts the most. Beside him in bed No. 10, Permenia is clinging to the hard plastic doll the nurses have given her. She doesn’t want to talk about her wounds—a patchwork of burns on her arms, legs and face. “My children are not Osama bin Laden,” says their father, Tajmusmmad, who was a usedclothing vendor before the war. “Why did this happen to them?”

Farther down the hall in bed No. 15, Saleema, 10, tells her story. “I heard the plane and ran to the house. I was almost there but a wall fell down on me.” Neigh-

hours tried to help her in Dashat, the village where she lived on the outskirts of Kandahar. But her leg was badly broken and, by the time she arrived at the hospital in Quetta five days later, it had to be amputated below the knee. Doctors struggled to save what remained. Injured Afghan children like Saleema need extensive rehabilitation, but most of them won’t get it. Their families don’t have enough to eat and can’t find shelter, so fitting a prosthesis and teaching a child to walk again are a long way down their list of priorities.

Thousands of other refugees have fled to Quetta and Peshawar. Living in squalor— sometimes 19 to a single room with a dirt

floor—they tell harrowing tales of walking for days over mountains, hiding from the warring factions, and stopping only to let their children gather the strength to continue. The children, although weakened by their long journey, are often immediately put to work as little more than slave labour to support their families. In the back alleys of Quetta, every third house seems to have been turned into a carpet factory. Inside, dozens of children between the ages of five and 15 sit on narrow benches in front of the looms.

They work at lightning speed, hooking coloured threads on the loom, following complicated patterns hanging on charts from the ceiling, hopping up and down from their perches to grab a new, differendy coloured thread when necessary. The children smile at strangers and giggle with each other, but all have chronic coughs from inhaling the wool fibres. They are paid just 100 rupees ($2.60) when their team completes a seven-by-seven-metre carpet—just enough money to keep their families from starving.

The hero in their lives is Amir Rashid, a young man from Quetta who decided to do something about their plight. With $27,000 in funding from the Canadian International Development Agency, he cut a deal with the carpet bosses and opened a school for the children. There are now 200 of them learning to read and write. If he had the money, Rashid says he could “make places for 600 more kids in this neighbourhood alone.” Later, outside of the school, a dozen mothers chase Rashid down an alley, begging him to take their sons and daughters.

As bad as their situation is in the sweatshops of Quetta and Peshawar, these children will at least survive. Thousands of other men, women and children nearing starvation remain trapped inside Afghanistan. Nearly $340 million in aid has poured into the country, and dozens of groups are trying to reach the starving, but it is an enormously frustrating exercise.

UNICEF tried to get to some of them in mid-November by sending donkey convoys laden with food from Pakistan into Afghanistan, a manoeuvre that became something of an epic in itself. Nearly 1,000 drivers and 900 donkeys transported 4,500 loads of food in relays over 2,700-m-high mountain passes in about two weeks. But it wasn’t nearly enough. “It’s difficult to move inside the country,” says Hartley. “We’ve been

pretty much restricted to Kabul, not because of a roadblock or a donkey’s broken leg but because of the atmosphere of fear and confusion that’s everywhere in Afghanistan today.”

With the arrival of winter—and the possibility that the mountain passes will soon shut down—there is even more pressure to get the aid trucks rolling. More than 100 children froze to death last winter in a three-day period; as well as food, a million child-size winter jackets are desperately needed. But truck drivers are too frightened to head into the interior. “Four journalists were killed on the road to Kabul on Nov. 18,” says UNICEF spokesman Gordon Weiss in Islamabad. “You can’t ask drivers of aid convoys to take these kinds of risks.”

Even as the situation worsens, there are some signs of hope as Northern Alliance and U.S. troops slowly take control of the country. Planes stuffed with blankets, wheat and sacks of clothes are landing. But stability is necessary for aid organizations to get on with the long-term work that must be done. “What’s needed,” says Weiss, “is infrastructure—education systems, health systems. The lack of these is what really kills people.” In the Killi Faizo refugee camp, Feroza Qayyum says her needs are much simpler. “I just want to be someplace,” she says, holding Sharifa in her arms, “where I can find bread for my kids and live in peace.” E3 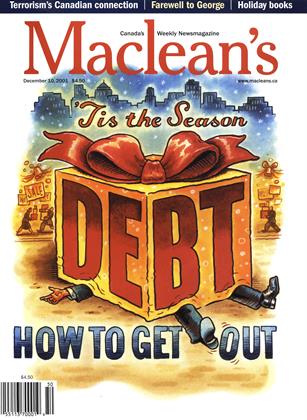