Wendy Cukier, an information technology management professor at Ryerson University in Toronto, founded the Coalition for Gun Control in 1990 with Heidi Rathjen-a survivor of the Dec. 6, 1989, massacre of 14 women at l’Ecole polytechnique at Université de Montréal. Their lobbying efforts helped lead to the 1995 passing of Bill C-68-which bans some guns, sets stiff er penalties for firearms offences and says all firearms in Canada must be registered by Jan. 1, 2003. Today, 76 percent of Canadians want all gun owners to register their weapons-a 12-per-cent rise in public opinion since Bill C-68 became law. Maclean’s Correspondent J. P. Fozo spoke with Cukier, who maintained that 12 years after the Montreal massacre, there's still plenty to be done:

“Right now, the legislation is very fragile. How they implement it can have a huge impact. Over the next few years, we’re going to keep an eye

on the government and stay in communication with the public.

“My biggest concern is the North American border. There are 200 million guns in the U. S.-and an average of 1,400 guns are confiscated by Canadian Customs every year.

“In Canada, handguns have been licensed and registered since the 1930s. As a result, Canada has roughly one million handguns while the U.S. has more than 76 million.

“While the murder rate without

guns in the U. S. is roughly double to that of Canada, the murder rate with handguns is 15 times that of the Canadian rate. Half of all handguns recovered at Canadian crime scenes originated in the U.S.

“When you promote free trade, you promote the movement of illegal goods as well as legal goods. It’s not a choice between a good economy and a safer country. You have to balance our economic interests with our security interests.”

Joint Task Force 2: Finally deployed. Canada’s secretive special forces are heading out, presumably, to Afghanistan. But will we ever find out what they will do?

Stock markets: Roar back. The Dow breaks 10,000. Tech equities are especially hot. But you never lost faith, did you?

^ Biker gangs: Seek friendship. Study says psychological reasons, not the drug trade, drives their expansion. Aww. Adorable-if it weren’t for all the murdering.

All the way from Surrey

After Sept. 11, some Canadian firefighters found a heartbreaking way to help their brothers in arms-they began flying to New York City to attend services for the 343 firefighters killed in the collapse of the World Trade Center. “The consensus was to come here and help supply manpower,” said Kevin Hegarty, a Surrey, B.C., firefighter who travelled to New York with three colleagues, “to make sure every firefighter gets the proper respect at their funeral.” Prior to the terrorist attacks, a New York firefighter’s funeral drew 10,000 people. But with numerous

funerals held nearly every day, attendance has fallen to between 300 and 3,000.

Surrey firefighter Joe Radovich had a more personal reason for paying his respects. “Three years ago, I was in New York on vacation and traded T-shirts with a guy from Ladder 20, Robert McMahon,” says Radovich. “When they pulled his body out of the rubble, he was wearing my shirt. My family helped put the money together so I could come to New York."

After emotional days spent at services, many of the Canadians take

in New York Rangers hockey games, Since Sept. 11, there have been Canadian firefighters at nearly every home game. When the firefighters show up to buy tickets, they are escorted to high-priced seats, cour-

tesy of Madison Square Garden. Then, after the game, some are taken to the locker room to meet the players. “They’re here doing such a wonderful thing,” said Rangers goaltender Mike Richter. “If we can make their stay a little bit better, we’re happy.” Meg Taylor

It’s in his KISS, that’s where it is

They rocked stadiums, spat fire, scared parents and wooed women. Now, the truth about rock legends KISS, as toid by lead vocalist and bass player Gene Simmons, is revealed in his recently released autobiography KISS and Make-up. Here are some interesting facts about the man with the huge tongue:

■ He first changed his name to Gene Klein-his mother’s maiden name-at the age of 8 upon moving to Queens, N.Y., with his single mom.

■ In his early 20s, he changed it to Gene Simmons, picking the name out of the blue while riding a subway.

and to taking Polaroid shots to remember them by.

■ In order to make extra cash during the band’s early days, Simmons worked as a typist at Glamour and an editor’s assistant at Vogue.

m His trademark makeup-black bat wings over his eyes with a white face and black lips-was inspired by a character from the Marvel comic The Inhumans.

a In his high-heeled boots (inspired by footwear worn in the movie Godzilla), Simmons stands al1 most seven feet tall. I ■ Both he and his a longtime girlfriend,

I Canadian Shannon •3 Tweed, have been on the cover of Playboy.

Remember, it’s a good cause

it would be best to check your wallet. It is almost sure to be lighter-in the name of a good cause, of course. For example, when the former South African president was in Canada to receive his honorary citizenship last month, he told a public gathering

in Hull, Que., that Prime Minister Jean Chrétien had all but agreed to help fund the peace process in Congo. Observers at the event said Chrétien appeared surprised, although he later told the House he had indeed agreed to help. How

could he have done otherwise, since it would have entailed contradicting Mandela in public?

It seems Mandela achieved a similar charity coup when Brian Mulroney was prime minister. Speaking at a public gathering, Mandela thanked Mulroney for Canada’s donation of “$5 million . . . U.S." to repatriate South African exiles. The government had intended to donate $5 million (Cdn), but paid the higher amount.

So last year, when International Co-operation Minister Maria Minna was planning a visit to Johannesburg with the intention of giving $1 million to the Nelson Mandela Children’s Fund, an official with a good memory made one suggestion: in the letter of intent, affix “Cdn” to the figure. Accepting the letter at his home, Mandela noticed the currency designation and chuckled to Minna, “You must have heard the M u I roney story.” Julian Beltrame

JT/'s the season to hibernate. I When the winter weather sends you inside, here are a few Canadiandesigned board games to stave off boredom.

Suburbia: In this un-ironic game based on suburban life-developed and distributed by the Stroet family of Smithers, B.C.-the board is fashioned into a neighbourhood. Players leave their home base and visit suburban haunts like an entertainment complex, a park and an Internet café. The first player to make it back home by answering trivia questions, unscrambling phrases or mastering other challenges wins.

Michael Dickerson’s Orunchtime: When Randy Thompson of Victoria was searching for a celebrity endorsement for his basketball-based board game Crunchtime, he found a willing participant in then-Vancouver Grizzlie Michael Dickerson. Even though Dickerson has since followed the team to Memphis,Tenn., the six-

foot, five-inch guard still endorses the game, where players move their way around the board with jump shots, steals, blocks and three-pointers. National Trash!: Ever wonder how tabloids create their farfetched headlines? After playing National Trash!, by Toronto-based Faby Games Inc., you’ll discover that all you need is a little imagination. Players vie for position of Media Mogul by creating sensational headlines. Don’t be surprised if the “UFO-eating talking monkey" wins the game.

The Great Ontario Trivia Challenge: If you don’t know that Kapuskasing is Cree for “where the river bends” or that the town of Gravenhurst was wiped out by fire in 1867, then brush up on Ontario facts with the Great Ontario Trivia Challenge. Developer Mark Sutcliffe, a transport company dispatcher, uncovered Ontario’s hidden treasures by researching all those small towns he sent truckers to. The game has 2,000 questions and comprehensive answers. 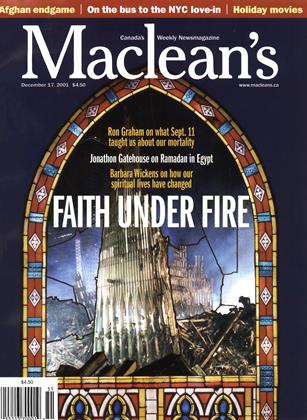