Faith, Politics and the NDP

Faith, Politics and the NDP

Among conservatives, the left-leaning United Church of Canada is sometimes chided as “the New Democratic Party at prayer.” That may be a stereotype, but in the case of the man who will be sworn in this week as Saskatchewan’s 14th premier, it doesn’t seem far off the mark. Lome Albert Calvert, 48, has spent most of his adult life pursuing two vocations, one religious and the other secular. The first saw him serve as a United Church minister over a period of 10 years.

In the second, he won a seat for the NDP in the provincial legislature in 1986 and rose steadily through the party ranks, culminating in his victory on Jan. 27 over six other leadership contenders vying to succeed a retiring Roy Romanow. Divergent missions—but, according to Calvert, very similar goals. “I’ve never felt a strong disassociation between church work and work in the public sphere,” Calvert told Macleans. “They are both about helping people.” 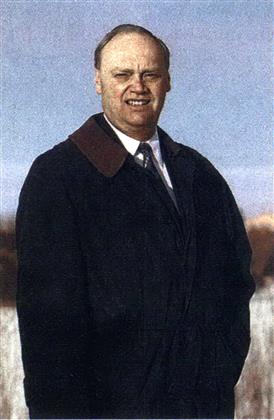 Hermanson: banking on the hope that Saskatchewan wants change

Faith, both in party and God, may come in handy over the next few years. Calvert is assuming the helm during troubled times for a party that, along with its predecessor, the Co-operative Commonwealth Federation, has ruled the province for 46 of the past 66 years. In September, 1999, the Romanow government, seeking a third majority mandate, suffered a stunning rebuke. The Saskatchewan Party—a three-year-old amalgam of disaffected Tories and Liberals—swept rural Saskatchewan and came very close to assuming office, winning 26 seats, compared with 29 for the NDP and three for the Liberals. Romanow, 61, struck a deal with the Liberals to form a coalition government. Last fall, he announced his resignation, pending the outcome of a leadership contest.

Last week, the NDP’s fragile grip on power took another blow as one of the Liberals, Jack Hillson, resigned from cabinet to sit as an opposition Liberal. The other two Liberals, including party leader Jim Melenchuk, say they intend to stick with the coalition. That means Calvert may yet have some breathing room to try to mend fences with angry farmers—and with factions of his own party—before facing the electorate.

As the recent leadership race demonstrated, the Saskatchewan NDP is sharply divided along ideological lines. Former National Farmers Union president Nettie Wiebe, who finished a surprisingly strong third, urged a return to the party’s interventionist past to battle what she sees as the ills of global capitalism. Former NDP MP Chris Axworthy, who was a close runner-up to Calvert, argued just as passionately in favour of hugging the political centre and coming to terms with the era of free trade and tax fatigue. Calvert figured somewhere between the two. “I see myself as someone who has the ability to unite people in common cause,” he says, “and to draw from people their various strengths.” Calvert’s politics were bred in the bone. His father, Albert Calvert, grew up as part of a large family during the Depression years and left school at a young age to ride the rails in search of work. After serving overseas with the Canadian Forces, Albert returned to Saskatchewan and spent the rest of his working life as a labourer for the Beaver Lumber Co. Lome Calvert grew up as an only child in a working-class neighbourhood of Moose Jaw. While neither of his parents was active in politics, Calvert can recall them telling him at an early age that “the party that represents the working family is the CCF.” He adds with a chuckle: “I couldn’t have told you at that time in my life what the other parties were.” 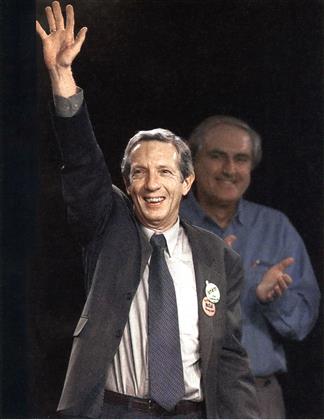 Calvert attended the University of Regina in the early 1970s, initially planning on a career in law. But he found himself increasingly drawn to religious studies. Calvert earned a divinity degree, became an ordained minister of the United Church in 1976 and served congregations in several Saskatchewan communities. It was as a student minister in the small town of Perdue that he met his wife of 25 years, Betty Sluzalo, who came from a large, staunchly New Democratic farm family.

Calvert entered political life in earnest in 1986 when he won an opposition seat for the NDP in Moose Jaw, where he still lives. He was appointed to the cabinet after Romanow led the party to victory in 1991, ending nine years of rule by Grant Devines Conservatives. Saddled with a crippling $842-million annual deficit inherited from the Tories, the Romanow government struggled to balance the provinces books. Along the way, funding for hospitals, schools and rural roads all got chopped. At the same time, Saskatchewans farmers, facing the worst income crisis since the Depression, were frequently told the province could not afford to bail them out.

As health minister and later social services minister, Calvert was a key player in the Romanow administration. He makes no apologies for the government’s austerity effort, arguing that it was carried out more compassionately than in many other jurisdictions. But he believes priorities should now shift. “I think we can start saying ‘yes’ rather than always being the government that says no,’ ’’explains Calvert. “I think we can again move on some of our hopes and dreams.” Calvert’s first priority, though, will be to win a seat in the legislature. He left politics in 1998, saying that he wanted to spend more time with his wife and their two teenage children. Less than two years later, he was enticed back by the prospect of becoming premier. Calvert is now widely expected to run in Romanows riding of Saskatoon Riversdale once the premier steps aside.

In the longer run, Calvert must find a way to reach out to the province’s embattled farmers. During the leadership race, he floated the idea of appointing a minister of rural revitalization—someone who would look at all policies of government and assess the implications for rural areas. Like much else about Calvert’s agenda, the proposal fails to impress Saskatchewan Party Leader Elwin Hermanson, the 48-year-old Beechy, Sask., farmer who has struck a responsive chord with his call for steep tax cuts and smaller government. “People are looking for fundamental change,” says Hermanson. I “They are not going to find it with I Mr. Calvert.”

Others wonder if the low-key, softspoken Calvert is either charismatic or tough enough to meet the challenges ahead. Former NDP leader Allan Blakeney, Saskatchewan’s premier from 1971 to 1982, says such concerns are misplaced. “Many clergymen are mild-mannered,” observes Blakeney, 75, who was an early and influential supporter of Calvert’s leadership bid. “I think his manner is deceptive in that regard. I believe him to have the intestinal fortitude and to be up to the task.”

University of Saskatchewan political scientist Cristine deClercy thinks Calvert’s personality may actually be an asset—at least in the short run. “One of the criticisms of Romanow,” says deClercy, “is that he insulated himself too much from the public when it was irate with him. Calvert seems more comfortable about reaching out to his critics.” All the same, deClercy doubts that Calvert can secure a fourth straight term for the NDP, which she thinks might not be such a bad thing. “A period in opposition,” she says, “could be healthy by giving them time to rebuild the party and its policies.” Forne Calvert, the workingman’s son, would doubtless disagree.