What characterizes Peter C. Newman as Canada’s pre-eminent chronicler of power is his ambiguity. In the three-book exploration of business elites that ended with Titans: How the New Canadian Establishment Seized Power (Penguin, 1998), and in his columns for Maclean's, which often are of the “I dropped in on such-and-such Master of the Universe the other day” variety, Newman manages to be both biting and fawning at the same time. At the heart of his approach is his ability to give the impression that he is at once part of the social group he writes about and not part of it, a consummate insider who maintains an outsider’s point of view. He is the Jane Goodall of Canada’s rich, and it lets him say the darnedest things in the name of financial anthropology. Who but Newman could or would describe Onex CEO Gerry Schwartz as “a Jew burdened with a Presbyterian conscience”?

It would be nice if there were more of that cheek in Titans the TV series, four one-hour shows premiering this week on Global. Titans profiles more than 20 of the country’s movers and shakers, including cable and media mogul Ted

Rogers (owner of Macleans), Bay Street financier Scott Paterson and Nortel Networks CEO John Roth. It’s a tall task—and the result is slapdash, as the show riffs through shallow biographies. Even the strongest elements—the oneon-one interviews with the titans—often come across as self-serving, and the series tiptoes around the controversies that surround many of its subjects.

descends into hagiography. The first episode is the weakest, precisely because it relies on banal theorizing about what makes today’s “titans”—a word repeated ad nauseam in the show, in an apparent attempt to infuse it with profundity—so exceptional. Seems that hard work is a factor (no surprise there), as are networking and resilience (“the strength to bounce back from deflating failure,” as the voice-over puts it). Evidence of Schwartz’s resilience, for instance, can be found not only in his philosophical attitude towards his losing bid for Air Canada, but also in his come-from-behind ability in tennis, as

revealed in a friend’s unctuous anecdote.

Much of Titans operates on that superficial level. With rare exceptions—the profiles of Rogers and french-fry king Harrison McCain—the viewer is left to wonder about such details as how these guys built or run their businesses, who helped them, and what 1 enemies they made along the I way. Peter Munk’s colourful ! and varied career—he dabbled in consumer electronics, Fijian resorts and oil and gas before settling on gold and real estate in the 1980s and 1990s—is given short shrift; instead, we get shots of him skiing in Europe. Or take Can West Global founder Izzy Asper’s public feud with moviemaker Robert Lantos over Canadian content on Global. There’s no mention of it in their episode, even as it profiles both men as “titans of media.”

In general—maybe as a trade-off for that great access—Titans is far too apologetic for its subjects. Sure, mention is made of 37-year-old honcho Paterson running afoul of investors and regulators, but the show writes his troubles off to Bay Street’s old guard wanting to take the new kid down a notch. And while Titans alludes to Nortel Networks’ current woes—its shares are down 79 per cent since last July—it portrays them as just a part of a general market downturn; legitimate questions about Nortel and about Roth’s disclosure of financial information are left unasked and unanswered. Maybe that points to the reason Titans is such a disappointment: the material—both Newman’s book and the complex, compelling people who comprise Canada’s modern elite—is so much better than the show’s flat and predictable delivery. At its worst, Titans seems mistitled; it could just as easily have been called Lives of the Saints.

Joe Chidley is the editor of Canadian Business magazine. 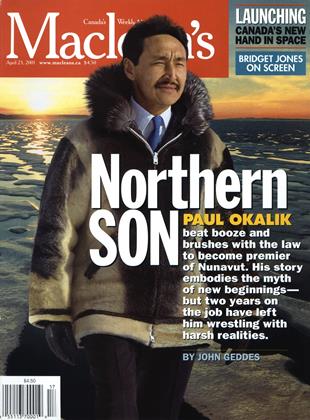