"I have a concern with some corporations in Canada right now,” James Ryan is saying from the floor of the annual meeting of the Ontario Teachers’ Pension Plan Board. Ryan, a teacher of students who are patients at Toronto’s Sunnybrook & Women’s College Health Sciences Centre, has waited for his turn at the mike as teacher after teacher addresses the small slate of officers who manage the pension fund. Ryan talks for a minute about the disproportionately high salaries paid to chief executives and other company officials. He singles out Nortel Networks Corp., saying he is “most concerned” about the high-tech giant, its CEO, John Roth, and his $135 million in stock options last year. “I’m wondering what can be done,” he says, “in the way of making some of the companies we own more accountable to us.”

is exactly what the teachers’ pension plan board is striving for. Under the direction of Claude Lamoureux, an unobtrusive 58-year-old actuary, the fund is turning upside down the notion that pension plan management is a sleepy affair. Lamoureux and his crew—he stresses this is a team effort—have taken on Canada’s largest and most powerful corporations, Nortel included, in a crusade to make them more transparent and more accountable to shareholders. With his shock of white hair, pressed cotton shirts and silk ties, Lamoureux may seem an unlikely activist. But behind him, he’s got the might of a $73-billion pension fund that holds a piece of every major company—and most minor ones—in Canada. In terms of capital market players, the fund is second in size only to Quebec’s Caisse de dépôt et placement— another pension fund not averse to throwing its weight around. Lamoureux personifies a new dimension in what may be called

democratic capitalism, says Keith Ambachtsheer, a Toronto-based adviser to pension funds around the world. As public companies progressed in the 20th century, he notes, hired managers increasingly ran companies owned by a large pool of passive shareholders. “Claude represents a movement of reconnection of ownership and control,” he says. “This is big stuff.”

As big as it may be, there are few pretensions about Lamoureux. Teachers’ offices, in northern Toronto at the end of a subway line, are a long reach from the downtown financial district. Lamoureux lives in swank Rosedale, but unlike many of his neighbours, he eschews the car and driver that could easily come with his status and rides the subway to work. When speaking ofTeachers’ successes, he is unassuming to the point of being self-effacing. He laughs when asked what he thinks of his image as the white knight, cleaning up corporate Canada.

As reserved as he is, Lamoureux is not lacking in confidence. Nor has he been afraid to “lift the rug,” as he says, in his own domain to expose problems swept there.

When he arrived at Teachers in 1990 with a mandate to create an equity-investment operation, he unexpectedly found an administrative backwater. Teachers, for instance, barely had a computer system—not only was the one terminal available to staff located off a cloakroom, it required a month of training before employees could use it. But the “pièce de résistance,” Lamoureux says, was a bank of telephones near the main reception area. After puzzling some time over the phones’ purpose, he discovered that teachers—the clients of the pension fund—who turned up without an appointment had to use them to talk to plan reps, some of whom were on the other side of the wall. Lamoureux asked that the phones be taken down. Twice. The third time he brought it up, he admits his voice was loud enough that everyone on both floors occupied by the pension plan could hear what he had to say. The next day, the phones were history.

Lamoureux, a francophone who grew up near St-Hyacinthe, Que., says he’s approached all his jobs in the same way—as though he’ll be there until retirement. “If I didn’t like the environment, then I’d change the environment,” he says in a rolling Quebec accent. This is the same approach he’s taken as a player in the capital markets, one that makes him, as Ambachtsheer says, “the most visible and articulate” figure calling for better corporate governance.

What Lamoureux wants are decisions at the board level that re-

spond better to shareholders’ interests. He wants a majority of directors to be outsiders, rather than corporate officers or others involved with the company. He wants boards kept small enough to be effective, though not so small that they can’t operate. He wants the chief executive and chairman to be different individuals, not one person holding both titles. Lamoureux is opposed, in most cases, to the poison pill, or the more palatably named shareholder-rights plan, a potent anti-takeover device involving expensive new share issues. He is also leery of going-private transactions, leveraged buyouts, most lockup agreements, crownjewel defences and the payment of greenmail—all of which are variations on the theme of favouring one set of shareholders (usually insiders) over another (usually minority shareholders). Lately, Lamoureux has been most vocal about stock options—the deals that allow executives or employees to buy shares at a fixed price, which they hope will be much lower than the market price when they exercise them. Not only are options not accounted for on Canadian companies’ balance sheets, says Lamoureux, they dilute shareholder value. “This is a huge problem,” he says. “Either it has to change or shareholders are really going to find themselves at the short end of the stick.”

On this front, Lamoureux is encountering stiff opposition. Last year, Teachers voted against amendments to an options plan at Nortel’s annual meeting, but lost, and the changes allowed Roth to go home with his $135 million. And because options have become common currency across North America, there is widespread support for them in the corporate world. Canadian companies would be hardpressed to compete for executive talent without them, defenders say. Besides, they pay much more than would the plan Teachers supports—options indexed to a company’s performance relative to its peers. Lamoureux and his colleagues at Teachers are on their own on this issue, says one banking industry executive, “and they’re not enough to move the dial.”

Fundamentally, Lamoureux’s efforts on options, poison pills et al target corporate directors. “Who approves these things?” he asks, in the manner of a Socratic professor. “It’s the directors. What is the role of the directors? The directors are there representing the shareholders.” Some, he says, have begun to tune in. The chairmen of the compensation committees of all the banks but one have called Teachers. Some directors have asked Teachers for its views, most recendy about options, in writing. With a letter from the giant pension fund in hand, directors can sidestep confrontation at the board table and blame Teachers. “At that point, we become the bad guy,” Lamoureux says, perfectly content. In fact, that would be Lamoureux’s answer to James Ryan’s question about how to make companies accountable: play the bad guy. For Lamoureux, that’s as good as it gets. ED

The top 10 equity holdings of the Ontario Teachers' Pension Plan Board as of Dec. 31» 2000—the most recent such a big market player will disclose— and what those holdings would be worth now 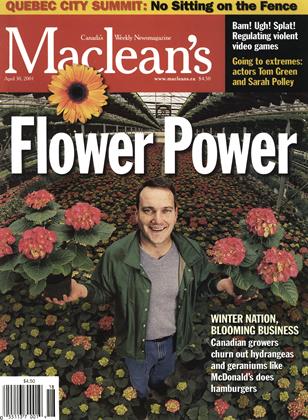