French police arrested James Charles Kopp, an itinerant anti-abortion activist known as Atomic Dog, in the post office in the village of Dinan, a tourist town in France.

Kopp, 46, was on the FBI’s most wanted list in connection with the Oct. 23, 1998, murder of Barnett Slepian, an Amherst, N.Y., doctor who performed abortions. Kopp allegedly shot Slepian with a high-powered rifle through his kitchen window.

The international manhunt gathered momentum when FBI agents tracked Kopp to Ireland. Just as agents were about to arrest him, Kopp vanished on March 12, apparently fleeing with a false passport. The FBI then tipped French police after tracing Kopp to Dinan through their investigation of a New York City couple who allegedly sent the package he was

picking up in the post office. (The couple was also arrested last week and held without bail in New York on federal charges of harbouring a felon.) Kopp is also wanted in Canada in connection with the shootings of three doctors who performed abortions. Like Slepian, they were shot while in their homes, but they survived the attacks. At week’s end, Kopp was in jail in Rennes, the capital of the Brittany region, awaiting an extradition request from the United States.

Twenty-three Zapatista rebels filed into the legislative palace in Mexico City to deliver an impassioned plea for lawmakers to pass an Indian rights bill that would give the country’s 10 million indigenous people the right to self-rule. The rebels, who began an unarmed march from the southern state of Chiapas on Feb. 25, have been fighting for self-rule since 1994.

Bloodshed in the Balkans

Fighting between the Macedonian army and ethnic Albanian insurgents spilled over into neighbouring Kosovo, killing two people and injuring 16. So far, three people have died in the battles, which began in February when rebels seeking to create an independent Albanian state moved from Kosovo into Macedonia. There, Albanians make up 25 per cent of the country’s population; in Kosovo, currendy part of Serbia, they are over 90 per cent.

Polish investigators uncovered a mass grave containing the bodies of 1,600 Jews who were killed by their Polish neighbours in the village of Jedwabne during the Second World War. The Polish government’s decision to apologize in July for the murders has divided the country, where most people believe Poles never aided the Nazis’ drive to eradicate the Jewish population.

Abdelmajid Dahoumane, an associate of alleged terrorist Ahmed Ressam, was arrested in Algeria. U.S. investigators believe Dahoumane and Ressam, on trial in Los Angeles, were part of a terrorist cell in Montreal. Ressam’s lawyers claim Dahoumane is the mastermind behind a plan to blow up buildings in the United States during celebrations to usher in the year 2000.

Rage and death in the Middle East

Israeli planes bombarded military bases belonging to Palestinian leader Yasser Arafat’s security forces affer a suicide bomber killed two Jewish teenagers in Qalqilya, 80 km north of Jerusalem. The strike was Prime Minister Ariel Sharon’s toughest response since he took office on Feb. 7, and it followed three days of bombings that left five Israelis dead. But Arafat vowed to continue the Palestinians’ six-month-old uprising, and thousands responded by battling Israeli troops with stones and guns in yet another “day of rage.”

A former dictator under police siege

In a night of drama and chaos, masked Yugoslav police commandos first stormed and then laid siege to the residence of Slobodan Milosevic, in an attempt to serve the former Yugoslav leader with an arrest warrant late last week. Bodyguards

and a Yugoslav army unit that had been protecting the compound repelled the assault with automatic gunfire, injuring at least two. Milosevic is wanted for corruptionrelated charges at home and on war crimes charges by the International Criminal Court in The Hague.

At week’s end, Milosevic remained in his compound, insisting he will not be taken to prison alive. 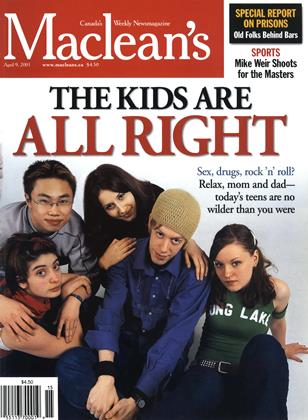