Grace at the Canadian Club of Toronto luncheon is usually a straightforward, let’s-count-our-blessings kind of prayer. It doesn’t normally address current events. But last week, as the elite of Canada's investment industry stood around tables draped in white linen and bowed their heads, Rev. Canon John Erb prayed for Almighty help for “those who deal with the riches of others.” He spoke of the integrity and high ethical standards that prevail in the investment business, but allowed that sometimes they are abused. “We ask for guidance and strength to those who are tempted to skirt such standards,” intoned the minister, touching down on a subject front and centre for this highpowered gathering: the insider trading scandal at Canada’s largest brokerage house, RBC Dominion Securities, owned by the Royal Bank of Canada.

The scandal, which revolves around Andrew Rankin, a 36-year-old executive suspended without pay after his name was linked to suspicious stock trading, is the most prominent, but it isn’t the only disgrace on Bay Street these days. Investment advisers at another long-established firm, BMO Nesbitt Burns, are accused of breaching securities rules in their handling of customer accounts. The industry’s own

watchdog, the Investment Dealers Association, recendy was rapped by the provincial regulator for being too slow with complaints. On top of this pall of dishonour, the industry is aware it is losing its hold on the Canadian capital markets. In the face of changing technology and—Quebec City protesters notwithstanding—the unstoppable advance of globalization, Bay Street is worried about its own survival.

Stanley Hartt is pacing back and forth behind his desk. “Tell them exactly what you just told me now,” he says into the phone. “They don’t need a whole lot of theorizing. Just tell it to them straight.” Hartt, a negotiator of the Canada-U.S. Free Trade Agreement and later Brian Mulroney’s chief of staff, is now chairman of Salomon Smith Barney Canada Inc., the Canadian arm of one of the world’s largest securities firms. He’s speaking to a team of U.S. investment bankers, coaching them for a pitch they are going to make to a Canadian company. The New York City-based bankers want to propose a takeover deal and the group is discussing strategy. “We don’t want to overwhelm them; we’ll take a small team,” Hartt says, still pacing. He suggests they try to get management onside and says he’ll talk to the CEO—“he’s a friend”—and then they will approach the board of directors.

Later, Hartt declines to provide any detail about the potential transaction—not only would he jeopardize the deal, he’d be passing on insider information, which is strictly verboten. But he does allow that what he is doing comes at the expense of the Canadian securities industry. And he acknowledges that in the long run, this is not great for Canada. He says the Canadian securities firms are being overtaken on their own turf by companies like his—powerful, primarily U.S.-based investment banks, many of them owned by banks. In Salomon’s case, it is part of Citigroup, a massive organization whose total assets amount to a staggering $1.4 trillion—$300 billion

more than the assets of Canadas five major banks combined. “I make a living financing companies that the Canadian banksslash-investment dealers can’t,” he says, adding: “Bay Street is falling behind.” Stripped of nuance, the business of Bay Street is fairly simple. It’s all about money. Dealers and brokers raise capital, usually from individuals and institutions that want to invest, and hand it on—to public companies to expand or make an acquisition, or to governments, which promise to repay with interest. There’s also the secondary market, essentially stock exchanges and bond markets, where individuals and institutions trade securities

already issued. Factor layers of nuance back in, add quasi-impenetrable jargon, and the world of high finance becomes an almost closed, Byzantine, secretive society. But its business, as mysterious and detached from the daily lives of Canadians as it may appear, is critical to a strong economy. The capital markets are the grease of the economy’s engines—without money, things come to a grinding halt. And business goes elsewhere.

Already, Canadian companies increasingly look south of the border to raise capital and make deals. Many Canadian businesses list their stock not only in Canada but also on the Nasdaq or New York stock

exchanges: three times as many today as 20 years ago. Of the $164 billion in merger and acquisition business in Canada last year, two-thirds involved a deal with a U.S. company. And of the $62 billion in equity raised by Canadian companies in 2000, about half came from foreign markets.

The impact shows. The Toronto Stock Exchange, once the temple of capitalism in Canada, is no longer sacred. Nasdaq, as part of its global ambitions, is now open for trading in Montreal, while smaller, more nimble electronic networks are ready to come into Canada from the United States once regulators clear the path. TheTSE has responded by joining with the New York

Stock Exchange and others to negotiate a worldwide, interconnected, round-theclock trading network. It’s also buying the Calgary-based Canadian Venture Exchange for $50 million—a move designed to lock up the Canadian marketplace.

Canada’s investment houses are also feeling the pinch. As investors and corporations look to the United States to do business, they also look to a firm that can carry them there. And while the Canadian dealers say they can do that—most have U.S. offices—the statistics tell a different story.

In 1990, Canada’s top 10 investment firms were all Canadian-owned. Last year, only five firms were Canadian. Four were U.S.based, the fifth a Swiss bank. Even more telling are the 10 largest corporate equity financings in 2000. Five of those issues were underwritten by four U.S. giants. Only two Canadian firms show up, with Dominion Securities far outstripping the field with four deals, and CIBC World Markets taking one. The upshot? Many of the best deals—the biggest, most lucrative ones—are going stateside.

The pressure on the Canadian dealers just makes them better, argues Michael Wilson, the former Conservative finance minister and now a powerful investment banker at the Royal. In the late 1980s, Wilson’s deputy finance minister was Stanley Flartt. Today, the two are competitors. Wilson says he is not fearful of the growing competition from south of the border. “I don’t think you’ll find Canadian firms saying”—Wilson wrings his hands in mock worry—“ ‘Geez, we’ll never be able to beat these guys.’ ”

Before politics beckoned, Wilson was executive vice-president of what was then called Dominion Securities Ltd. After Ottawa, he returned to the firm, but like most other major brokerages, it had been bought by a bank. Wilson says there were other changes. Cross-border equity issues, now commonplace, were extremely rare prior to a the 1980s and his government’s Free Trade | Agreement. The Canadian capital markets § are more sophisticated than those of coung tries of similar size, partly as a result of rub-

bing up against the U.S. industry, he says. It is good for the Canadian economy that Canadian companies can tap into the U.S. markets to finance their growth, he adds, even though it means market capitalization is being siphoned off to the United States.

In July last year, Wilson left his post as vice-chairman of RBC Dominion to take on the job of chairman and CEO of RT Capital Management Inc., the Royal Bank’s embattled pension fund management arm. His unstated job was to bring an aura of unquestioned integrity to the firm, which was at the centre of a high-profile scandal involving traders who had been manipulating stock prices. His mandate is to sell the division, a move the bank insists it was planning well before the scandal broke. Wilson says he’s come to understand, as he shops the fund manager around the United States, that RT Capital is as good as the American companies he’s talking to, regardless of size. The same goes for the Canadian investment banks. Wil-

In 1990, it was an all-Canadian list. Not in 2000. Here are the top 10 investment firms in Canada (with foreign ownership noted) and the total value of their underwriting deals

son argues that the Canadians’ advantage is they will send their A-team to companies in Canada looking for investment banking services, while the U.S. firms’ top people are generally focused on larger players.

Not so, responds Tom Gunn, who, as chief investment officer of the Ontario Municipal Employees Retirement System, is a major client of the brokerage houses. Gunn is responsible for one of the largest pools of capital in Canada—OMERS has assets of $37 billion—and he has a bird’seye view of the investment business. “I find I get the A-team,” Gunn says of the U.S. firms. “The Canadian A-team can be very good, but let’s remember, if you’re trying to build something that’s going to go around the world, surely you want to go and deal with the people who know the most about the world.” The U.S. firms bring greater expertise and greater placement power, he says. “I’m not Canada-bashing,” Gunn insists, but he says the difference is beginning to show: “Bay Street could become a branch plant.”

When asked what’s needed, Gunn brings up an old solution—one that could arise later this year when long-awaited financial services legislation is adopted. A merger of two Canadian banks, he says, could provide the bulk needed to become a bigger, global player in investment banking. Hartt agrees. “I’m a nationalist underneath my desire to make a great living at the expense of the Canadian banks,” Hartt says. “Canada needs bigger banks. They should not be prevented by their government from being players in a global league.”

In other words, size matters. For the Canadian investment banking industry to thrive, perhaps that’s what’s called for. Alitde Divine intervention, too, wouldn’t hurt. US 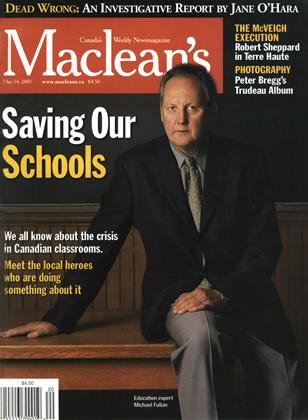