Not water again. Seven innocent Ontarians died in Walkerton last year, and people said that was a wake-up call. But it has happened again, this time in Saskatchewan. Tests have since shown that the tainted water in North Battleford did not kill three people as first suspected, but that’s not the point. There are hundreds of residents in that community with stomach cramps and diarrhea. And more than likely, there will be outbreaks elsewhere, in part because the bugs in our water—and there are plenty of them—are very good at making us sick, while our ability to deal with them is coming up short. Take British Columbia, where hundreds of municipalities do not filter water for Cryptosporidium, the single-celled beast that struck North Batdeford. “It’s like Russian roulette, with five bullets in the chamber,” says Dr. Jay Keystone of the Centre for Travel and Tropical Medicine at the Toronto General Hospital. “It’s only a matter of time before you shoot yourself in the head.”

Nasty waterborne pests such as Cryptosporidium, E. coli 0157:H7, Norwalk, Shigella, Giardia and Toxoplasma are all well-adapted saboteurs of our gastrointestinal plumbing. Some are more widespread than others, but all can infect the guts of domestic and wild animals, as well as humans. The intestines act as unwitting incubators for this dangerous and sometimes deadly gang of bacteria, viruses and

protozoa (single-celled organisms sometimes considered “simple animals”). All follow a pattern of fecal-oral transmission—infected feces somehow end up in the water we drink and brush our teeth with. Cryptosporidium, a parasitic protozoan, roams widely, but occurs more often in rural areas with intensive farming. It lurks in the bowels of young ruminants, including calves and lambs, and spreads through contaminated feces that seep or are discharged into our waterways. Cryptosporidium's animal reservoir, says Keystone, is huge. “We’re never going to be able to eradicate it.”

In one of the most comprehensive sur-

veys to date, the Centers for Disease Control and Prevention (CDC) in Adanta identified the five top bio-culprits associated with major outbreaks of waterborne disease in the United States. The findings, says Dr. Andy Simor, an infectious disease specialist at the Sunnybrook & Women’s College Health Sciences Centre in Toronto, apply equally well to Canada. They show it can be a mistake to think of water as benign. Glen Armstrong, a professor of medical microbiology at the University of Alberta in Edmonton, thinks taking control away from the provinces and having Ottawa set binding national standards for water treatment would help. “North Battleford coming close on the heels of Walkerton,” says Armstrong, “has reinforced the fact that we can’t be complacent anymore.” With so much at stake, it’s worth getting to know some of the bugs that have no business in our drinking water.

Cryptosporidium Discovered in 1976, this potentially life-threatening parasite is responsible for over half of all outbreaks of waterborne illnesses in North America. The infectious form in its life cycle is called an oocyst (oh-oh-cyst), which is protected by an outer shell of molecular armour that makes it very resistant to chlorine. It’s about half the size of a red blood cell. When ingested, Cryptosporidium attaches to the cell wall of the upper intestine, aka the small bowel. It causes a local inflammatory response, forcing intestinal cells to

excrete fluids, ultimately resulting in watery diarrhea. “The diarrhea can be relatively mild,” says Simor. “It can also be much more severe: five to as many as 15 or 20 bowel movements per day.”

Symptoms of cryptosporidiosis usually appear two to 10 days after exposure and, in addition to diarrhea, can include cramps and a mild fever, which last about two weeks. Once recovered, a person can still pass Cryptosporidium in their stool for up to two months. There is no treatment, and physicians suggest drinking fluids to prevent dehydration. Rapid fluid loss can kill babies, or anyone with a severely weakened immune system— AIDS patients, those with cancer, or organ transplant recipients taking immunosuppressive drugs. Cryptosporidium can be caught in swimming pools or hot tubs. Infected water must be boiled for at least one minute.

E. coli 0157:H7 This bacterium is a killer. There are hundreds of harmless strains of Escherichia coli living in animal and hu-

man guts, but 0157:H7, first identified in 1982, produces a mean toxin that leads to bloody diarrhea and occasional kidney failure. The letters and numbers are scientific shorthand and refer to identifying features on the surface of this rod-shaped, single-celled viper. People get it by drinking bad water, as Walkerton residents can attest, but the majority of infections occur by eating undercooked, contaminated ground beef.

It is suspected that only a few bacteria are required to make a person sick. It usually takes five to 10 days to recover, and antibiotics are not effective. In fact, some health authorities believe antibiotics can cause kidney complications when taken for E. coli. Anti-diarrheal treatments should be avoided. Children under 5 and the elderly have a higher risk of suffering from a complication called hemolytic uremic syndrome, which destroys red blood cells and causes kidney failure. The syndrome strikes between two and seven per cent of victims, and may kill up to

five per cent of those even with treatment in an intensive care unit.

Norwalk This roundish virus is innocuous in comparison to E. coli, causing just a day or two of diarrhea and perhaps a lowgrade fever, maybe some vomiting. Still, it is pervasive, accounting for an estimated one-third of all viral gastrointestinal cases in North America in those over the age of 2. It is usually associated with outbreaks in communities, schools, institutions and cruise ships. People can also contract the virus by eating shellfish, which can become contaminated by ingesting human sewage on the ocean floor. About half of all adults develop immunity after being exposed to Norwalk, but it doesn’t last and reinfection is not unusual.

Shigella A group of bacteria fall under the Shigella umbrella, with symptoms varying depending on which strain is ingested. Shigella, particularly common in areas with poor hygiene, shows up more frequently in warmer parts of the United States, but is found in Canada as well. Diarrhea is often bloody. The young and elderly once again bear the brunt, with severe diarrhea forcing hospitalization. These bacteria were first discovered more than 100 years ago by a Japanese scientist, and today are usually treated with antibiotics. Anti-diarrheal products make things worse. Adults usually recover fully, but normal bowel habits can take several months to return.

Unknown One important point: the cause in almost one-fifth of waterbornedisease outbreaks can’t be pinpointed. “There are a number of possible explanations,” says Simor, “and one is that there are other agents out there that we have yet to identify.”

That completes the CDC’s list of top five bugs, but a couple of others with serious consequences are worth noting.

Giardia Canadians probably know this protozoan agitator as “beaver fever.” Many campers and hikers who drink from streams and lakes contaminated with beaver feces, as well as waste from humans, muskrats and dogs, have succumbed to its symptoms, which include diarrhea,

cramps, gas and weight loss. The parasite, which resembles a pear having a bad hair day, germinates inside the host, reproduces and causes illness. Once it has fed itself, Giardia forms a protective cyst similar to Cryptosporidium and is excreted in the feces. It is found across Canada and around the world. Several provinces have reported outbreaks, but a number of prescription drugs help. “At least,” says Simor, “it’s relatively easy to treat.”

Toxoplasma In 1995, residents in Victoria got up-close and personal with another protozoa when about 100 people became infected after drinking water from a reservoir. Resembling a microscopic slug, Toxoplasma is often associated with cats, both wild and domestic, and is the reason pregnant women should not clean kitty litter. While a healthy adult’s immune system usually thwarts the microbe, Toxoplasma can lead to spontaneous abortions, or result in a mentally or physically impaired child.

It is no wonder that there are so many microbes in the water. In St.

John’s, Nfld., Halifax and Victoria, raw human waste is dumped in the ocean.

Meantime, municipalities across the country are struggling with aging equipment and tight budgets squeezed by provincial downloading. But there is room for some optimism: British Columbia last month toughened water management and gave the province’s health department a larger role to play. The only other province where the health department manages water is New Brunswick. The changes in British Columbia provide for more plant inspections and higher fines for infractions. Since the Walkerton tragedy, Ontario has made the federal-provincial guidelines on water quality legally binding, with penalties for infractions. That is a good start, says Barry Thomas, a former Health Canada official who once sat on the committee that sets drinking-water guidelines

for the country. But Ontario has not put aside the substantial sums needed to upgrade treatment plants, he says. “There are so many places that have to spend a lot of money that it would add up to the hundreds of millions,” adds Thomas, “and I’m not hearing that.”

In North Batdeford, talk has turned to lawsuits and inquiries. In Ottawa, the government endorses what some MPs see as a hollow pledge to only discuss the problem with the provinces. Meanwhile, the latest wake-up call has reignited demands for

A sometimes deadly gang of virases, bacteria and protozoa means it is a mistake to think of water as benign

Ottawa to take water regulation away from the provinces and set binding standards for the country. In that regard, Senator Jerry Grafstein has a private bill before the Senate urging that the Food and Drugs Act be amended to define water as food, giving the federal government the power to set standards, investigate and discipline violators. Outbreaks are too often treated as isolated incidents, says Grafstem. “It’s perceived to be a local problem,” he says. “Yet when you aggregate them, it becomes a national problem.” Grafstein and his supporters point out that the Environmental Protection Agency sets the standards for every U.S. state. They ask: why couldn’t something similar be done here? EH 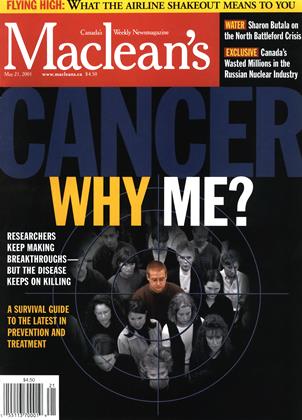