It may be a venerable Prince Edward Island company—but there is nothing stodgy about Veseys Seeds Ltd. In 1998, when the Canadian dollar first slipped below 64 U.S. cents, the firm promptly issued two editions of its lavishly illustrated annual seed catalogue: one in U.S. dollars for American flower and vegetable fanciers and one in Canadian dollars. But the firms need for U.S. and Dutch funds to buy seeds, bulbs and perennials still exceeds what it gets from U.S. seed purchasers. So the 62-year-old firm, which is tucked into the tiny rural community of York on the outskirts of Charlottetown, has become as fast on its feet as any Bay Street currency trader. Its accounting department regularly tracks the Dutch guilder and the U.S. dollar, snapping up advance contracts to buy those currencies whenever the Canadian dollar edges up against them. “It’s one extra headache that we could live without,” says marketing director John Barrett. “If the darned thing were at par, it would probably make everybody’s life a lot easier.” That wistful sentiment is rapidly becoming ever more elusive: in recent weeks, the loonie has once again danced perilously close to record lows—and then edged back to relative safety. The turmoil conceals a more troubling pattern of seemingly relentless decline. Since it was last at par in 1976, the Canadian dollar has lost almost 40 per cent of its value against the U.S. dollar. Throughout the past decade, it has dipped with each world economic crisis—but never fully recovered when the trouble eased.

Although it was a mere two one-hundredths of a cent above its record low of 63.31 U.S. cents in early April, it was a more comfortable 64.86 U.S. cents at the end of last week. There are conflicting opinions about where it will go now. But many experts warn that it could hit new depths over the next few months if the economic situation worsens—and investors stampede to U.S. assets in search of stability. “We don’t have a flexible exchange-rate policy, we have a sinking exchange-rate policy,” says Jeff Rubin, chief economist at CIBC World Markets. “So the only determinant as to how low the Canadian dollar will go is time. And, yes, inevitably, we will go below 60 cents.”

The loonies situation has attracted so much attention that Bank of Canada governor David Dodge has gone out of his way to reassure investors. At a Senate committee hearing in late March, he noted, “It is fair to say, from the point of view of domestic policy, that none of us were unhappy with Canadas position before the Mexican peso crisis [of late 1994] at about 73 or 74 cents.” Two weeks ago, he added in some exasperation: “Quite often, I see my remarks interpreted that I think somehow a low dollar is good: well, that is just not the case.”

Despite such clear nudges to the currency markets—which parse every word a central bank governor emits—experts warn that the loonie may eventually go the way of the dodo bird if it continues to lose altitude.

Many firms already conduct their business in U.S. dollars: Aurora,

Courchene himself now argues that Canada risks two unpalatable futures: if a recession ensues, the U.S. dollar could sink, forcing up the value of the Canadian dollar at the worst possible time for export sales; or the Canadian dollar could continue to falter—and the standard of living could steadily sink. “In either case, we would have been better off fixing the dollar at around 80 cents in the late 1980s, or going into a common currency,” he says. “This issue is not going to go away.”

Still, such drastic action remains a long-term prospect. In mid-April, Mexican President Vicente Fox told an intrigued Ottawa audience at a small private breakfast hosted by the Business Council on National Issues that, although there will likely be a common North American currency and monetary union, he believed it will happen 15 to 20 years down the road. Last week, in a brutally frank assessment, the Toronto Dominion Bank concluded that Canada would have to give “very serious thought” to adopting the U.S. currency if the Canadian and U.S. economies become more similar. “However,” the study added, “that is at |piy least a decade or two away.”

Morgan Chase & Co., notes that Ottawa raised the allowable level of foreign content in registered pension plans to 30 per cent from 25 per cent on Jan. l.Asa result, Carmichael calculates that another $50 billion is now being invested in foreign assets—a further source of downward pressure on the loonie.

What is to be done? Canada could raise its bank rate of five per cent so it hovers even further above the U.S. rate of 4.5 per cent. That would make the currency more appealing to buyers. But it would also be asking for trouble at a time of slower growth. Economist Rubin links the loonies decline to the fact that Canadian interest rates have usually stood below U.S. rates over the past four years. But even he counsels against a rate hike—unless it is accompanied by large stimulative tax cuts.

In effect, experts only want the loonie to rise gradually, preferably after the risk of a recession has abated. There is room for an increase: the loonies actual purchasing power is higher than its value in U.S. dollars. The Organization for Economic Co-operation and Development has calculated that one Canadian dollar could buy the same amount of goods as g 84.7 U.S. cents last year. So the dollar is theog retically undervalued.

“ a slow upturn. Sure, the low loonie means § Canadian goods are super-cheap for U.S. purm chasers. But it has also pushed up the cost of imported technology and communications equipment. “The current low dollar is really a double-edged sword,” says Jay Myers, chief economist at the 3,000-member Canadian Manufacturers & Exporters. “A dollar around 75 cents would still be competitive. But the emphasis has to be on a slow appreciation.”

Most Canadians would setde for stability right now. Even Prime Minister Jean Chrétien has become exasperated about the loonie. “He once turned to me at a private dinner and said, ‘I am perplexed: the government of Canada has done all the right things. Why does the dollar continue to perform so badly?’ ” recounts BCNI president Tom d’Aquino. “I said that we have to finish the job of economic reform.”

In the long term, that means Canada must dazzle—if it ever wants to grab the spotlight from its southern neighbour. Many experts, including d’Aquino, have congregated around a common set of remedies. Pay down the $544-billion federal debt. Trim taxes. Spend more on growth-enhancing measures such as research. Such tactics might boost Canadas paltry productivity, which grew at less than one-third of the U.S. rate of 4.3 per cent last year. “The best investment returns usually come from the economies that have the strongest productivity growth,” says economist Carmichael. “That’s where people want to put their money.”

In the meantime, Veseys is struggling to prepare its seed catalogues for the annual November debut. Its prices will be set in stone for a year. What happens if the loonie sinks again next year—and Veseys must pay steeper U.S. prices to procure its products? What happens if the U.S. dollar sinks—and the seeds suddenly appear overpriced to U.S. customers? “It’s tough—but we do it,” says Barrett. “I just wish it wasn’t so volatile.” A lot of Canadians would second that emotion. ESI 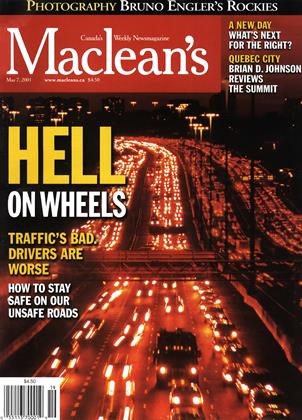