It’s not much to look at from the outside—a bland 10storey office tower in St. Catharines, Ont. The small foyer is deserted, with no hint of who works on the eighth floor. For expected visitors, a casually dressed employee arrives to facilitate passage to the inner sanctum. He inserts his pass card to unlock one of three elevators, which rises slowly before opening on a dimly lit den of innovation. Here at Silicon Knights, one of the top video-game developers in Canada, designers, graphic artists, mathematicians—even a PhD in psychology—are creating a thriller called Eternal Darkness for the GameCube, the hotly anticipated, next-generation console from Nintendo due in November.

These are heady times for the industry. Microsoft plans to release its Xbox just three days after the GameCube, while Sony’s PlayStation 2 hit North American stores last October. But the game boxes are nothing without games. The looming battle has

created intense demand for digital content featuring action, sport, fantasy and science fiction. “It’s just like university,” says Denis Dyack, who has three postsecondary degrees and is president of Silicon Knights. “When you have to get ready for an exam— whatever it takes, you do.”

Like other creators across the country, Silicon Knights is geared up for a fight. With the gaming landscape changing, 2001 is shaping up to be the opening round of a long, perhaps bloody battle of electronic titans. As Nintendo flogs GameCube, Sony peddles PlayStation 2 and Microsoft spends a mind-boggling three-quarters of a billion dollars promoting the Xbox, game developers in Canada are licking their chops, hopeful they can cash in.

But it’s not so easy to score big. Major developers have the financial clout to create games for all three systems, known as platforms. The little guys have to be more selective, and will usually be forced to develop games for just one. But which one? Who will win out—Nintendo, Sony or Microsoft? And more important, who, if anyone, will fall in the heat of battle, snuffed out like Segas Dreamcast console earlier this year, taking small developers down with them? “One of these platforms is going to fail,” says Dyack, “and because of that, you’re going to see a lot of companies go under.” Not everyone agrees. Some say all three platforms could carve out their own, not-so-little fiefdoms, given how large the market is projected to grow. According to the Canadian Interactive Digital Software Association, the sale of hardware, software and gaming accessories is worth $600 million a year in Canada and has been expanding by eight to 15 per cent annually. Worldwide, the market is valued at $25 billion. According to the market research firm ACNielsen, one-third of Canadian households have at least one gaming console, while Forrester Research predicts that by 2005, consoles will be in nearly 70 per cent of U.S. homes. “If this game market expands like it potentially could,” says Darren Elkerton, business manager for computer industry services at ACNielsen, “maybe there’s a place for all three of them.”

Silicon Knights is in an enviable position. Dyack, 34, an energetic former varsity wrestler, co-founded the company in 1992 while completing his graduate degree in computer science at Guelph University in I Ontario. There were four employees then, but critical and financial success has propelled the tally to 57 today. Last year, as often happens with accomplished smaller developers, Silicon Knights sold an undisclosed stake in the company, in this case to Nintendo. With close ties to a major platform developer, Silicon Knights can now count on getting the inside track on hardware specs, and benefits from Nintendo’s hefty marketing budget.

That said, Silicon Knights still has to come up with a great game to remain a player. Dyack, a self-described history buff whose gaming nickname is Blind Swordsman, after a fictional samurai character, says success requires getting the most out of a game’s story, audio, artwork, game play and platform technology.

In a GameCube demonstration of Eternal Darkness, Dyack manoeuvres a Roman centurion through a dank crypt, wielding his sword to dismember zombie skeletons. The memory-hogging characters are almost as detailed as those in the 1999 movie Toy Story 2, yet respond instandy. Other finely honed elements, including complex character reactions and elaborate environments, add to the sensory experience. What a difference a generation can make. Nintendo’s N64 console, which the Japanese firm expects to remain a choice for budget-conscious consumers over

the next one to two years, can’t match the lightning-quick scene changes made possible in part by the GameCube’s switch to a disk format. “We found that going from a cartridge on the N64 to the GameCube, the load times were much faster,” says Dyack. “We had to put an eighth of a second delay in because the cognitive response for people was too jarring.”

For Dyack, the choice is made, but some developers are still mulling where to place their bets. Bioware Corp., an Edmonton gaming phenomenon, is one. Profit magazine ranks Bioware as the eleventh-fastest growing company in Canada, with $11 million in revenue in 2000. But even with 100 employees, Bioware is considered a small independent. Greg Zeschuk co-founded the company in 1995 with Ray Muzyka and Augustine Yip, all three medical doctors with a love for gaming (Yip has since left).

THE BATTLE OF THE BOXES

Each of the next-generation game consoles has subtle advantages, so picking a likely conqueror in the battle of the three gaming titans is a tough call.

Sony’s PlayStation 2 has the momentum of being the first competitor on the market, Xbox by Microsoft wins hands down in terms of raw computing muscle, while Nintendo’s GameCube has eye-popping colours and a history of strong games.

Bioware owes its good fortune to its award-winning fantasy series, Baldurs Gate, which has sold more than 3.5 million copies worldwide. On the strength of that game,

WITH SO MUCH MONEY AT STAKE,

‘YOU WANT TO PICK THE WINNER,’ SAYS ZESCHUK

mains circumspect about which of the three platforms—GameCube,

PS2 or Xbox—Bioware will launch the game on next year. “You want to pick the winner,” says Zeschuk. “You don’t want to put all this money into a big Star Wars game and not be doing it on the right platform.”

Even the big players can get burned. In Montreal, Ubi Soft Entertainment Inc. has about 400 employees, the largest game-production facility operated by the Paris-based company. As a global Top 10 producer, Ubi Soft makes games for all platforms, including Nintendo’s GameBoy Advance, a handheld console compatible with the GameCube set for launch on June 11. Yannis Mallat, an Ubi Soft producer, oversaw development of Rayman Advance, a child’s game played on the GameBoy upgrade. Like all developers, Mallat had to rely on a prototype of the new hardware during the production process for Rayman, which was completed by the time the device was released in Japan last March. When Mallat tested his game on a GameBoy Advance acquired from Japan, he was flabbergasted: it didn’t work. The hardware specs had changed and now the game was much too dark, requiring all the graphics to be redone. “I wanted to cry,” says Mallat.

But it’s all in the game, when developing for new platforms. That’s why PlayStation 2 is seen as the current front-runner. Sony has now sold more than 10 million PS2s, partly because they also play DVDs and CDs. With that head start, developers have had time to familiarize themselves with the hardware’s programming

quirks, so new games will take fuller advantage of what the PS2 can do. Moreover, consoles first launched in Japan can be debugged before coming to Canada and the United States. Xbox, on the other hand, is launching in North America first, a possible problem for Microsoft. The flip side, though, is that the software behemoth has fe, strong relationships with North American developers, such as the group producing a game based on the hit movie Shrek. Xbox also leads in key technical measures, such as tfte polygons per second a console can process. The more polygons, t the better the graphics tend to be. y,’ But don’t count out GameCube. Even r if the Nintendo console, powered by a graphics chip made by Markham, Ont.-based ATI Technologies Inc., is a year late in its launch and faces a head-tohead retail confrontation with Xbox I next Christmas, it remains part of a I gaming powerhouse. Nintendo, af| ter all, is responsible for bringing the world icons such as Super Mario Bros., Donkey Kong, The Legend of Zelda and Pokémon. And while GameCube doesn’t play DVDs like the other two, Nintendo of Canada president Peter MacDougall says the platform will offer a pure experience. “We haven’t been encumbered,” says MacDougall, “by DVD movie delivery, or audio CDs, or a slicer-dicer.”

The fight will be long and expensive, but game developers have a broadening audience to look forward to, one which no longer consists only of teen and preteen boys in darkened rooms and basements. Children raised on Pac-Man and Frogger are now reaching their 30s—not to mention the boomers who got hooked on computer games or intrigued by their own kids’ consoles. It all means big business. Look at Electronic Arts in Burnaby, B.C., where seven PS2 titles are slated for release this year, as are three games each for Xbox and GameCube. Every version is more sophisticated. “It feels like we went from comic books to cartoons and now were getting into real cinematography and live action,” says EA executive producer Steven Rechtschaflner. “Maybe the last leap’s a bit of a big one, but I’m now working with cinematographers, lighting directors, editors.” As to eventual winners and losers among the Big Three— hard to say, according to Zeschuk at Bioware. “It’s going to be a while before we know because none of those guys is going to cut out early,” he says. “They’re going for it.” Bleep! Press Start.

How are women portrayed in games? 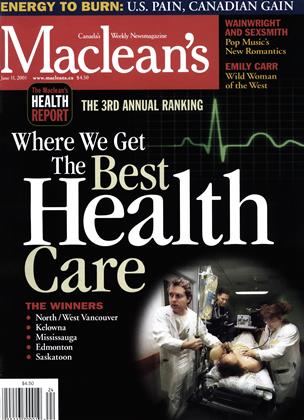