An immigrant is an optimist.

We were not only immigrants. We were refugees. My family and I arrived with nothing—one suitcase apiece.

However, that’s only “nothing” in material terms. If you come as a family—as we did—it is possible to be even more optimistic. Together, you create your own world and your relationship to the world outside you, which in our case is the larger world of Canada.

My father and mother left Hong Kong for Canada in 1942, fleeing the Japanese occupation. My brother was 7 and I was 3. There was a sense for us that this kind of voyage was not unusual, because my mother’s family had lived for a while in what was then Dutch Guyana (now Suriname) and my father’s father had immigrated to Australia.

One of the advantages that we had as immigrants to Canada was that we spoke English. Coming from Hong Kong, we simply exchanged one blotch of pink on the map for another blotch of pink. What was British, what was colonial, was familiar to us. And as Anglicans for several generations, we had the parish as another community for us besides home and school.

Being an immigrant has many advantages besides optimism. For one thing, if you immigrate to Canada, you find that you have more space than you know what to do with. This was an enormous advantage to our family, and we quickly seized

upon it after settling in Ottawa, building a cottage nearby in Quebec as soon as we had any savings and spending summers fishing, boating and living in the wilderness. We were able to do all of that while still eating Chinese food every night (and Canadian food for breakfast and lunch, particularly the hated porridge).

From another point of view, you could say that it is very advantageous to come from outside the centre of your society and get to the centre in your lifetime. This movement from the “ex-centric” to the centre gives you a different point of view, a different appreciation of the levels of your society and its complexities. It gives you a drive, an impetus and a spur to creativity. The outsider observes with great care and tries to figure out what is really going on. Nothing is taken for granted.

Perhaps this is the greatest strength that being an immigrant bestows— the ability to stand outside your new society while making yourself a part of it.

Outside the influence of my family, the public schools and universities I attended had the single most important impact on my early life. My father got a job in the federal civil service, and although we were never poor, my parents could never have afforded to send me to

schools that would have had to be paid for. And my mother frequendy reminded us of how lucky we were to be in Canada and able to go to school when education was so expensive in Hong Kong.

I was acutely aware of the benefits of being a part of an educational system to which 99 per cent of the population belonged. I went to some schools that were bet-

ter than others. Nevertheless, in a small city like Ottawa in the 1940s and 1950s, there was a very democratic mix in every school that I attended. There were kids from very poor backgrounds and there were kids who had more than one outfit to wear to school. But there was a sense that we all belonged in that classroom, learning the same things, having the same opportunities.

A public education system is vital to a successful immigrant society. By gathering everyone together in the same school system, it gives them the feeling that all members of society, including the newly arrived, have the same fair start. There is more to school than just learning the curriculum or the availability of enriched or special-needs programs. What it provides is a basic structure of education that not only teaches us to read, write and do arithmetic, but also teaches us how to relate to people throughout our society.

I am reminded of a photograph from the beginning of the last century showing a group of Scandinavian immigrants in a small Ontario town huddled around a blackboard. On it is written:

Duties of the citizen:

2. Take an active part in politics.

Perhaps this chalked message is more hortatory than actively pursued by the individuals in the photo. But the underlying intent is absolutely clear. It was expected that the immigrant, along with everyone else, would join in the social process, which was democratic, co-operative and directed towards others. Maybe these intentions would take some time before they were realized in the form of an inclusive citizenry. Nevertheless, such inclusion is our collective goal, and we should never lose sight of it.

For what we in Canada have really said is I that we want our immigrants to become cit! izens. This is not true in countries where im| migration simply means the importation of I foreign workers with few rights or citizenship possibilities. We have always assumed that anyone who immigrated here would become a citizen; indeed, is expected to become a citizen. Our public education system continues to be the most important means we have to bring about such inclusion in our society. Ours is a country that asks newly arrived people to take responsibilities almost immediately. It is this call to engagement that sets Canada apart. ESI 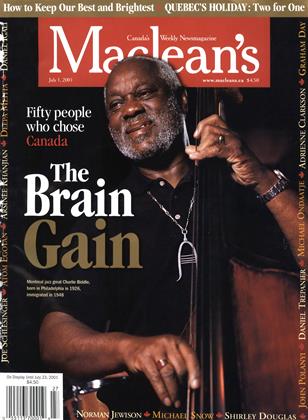