What’s bugging Canadians this summer goes beyond the usual seasonal vexation of picnic ants and marauding mosquitoes. Blame global warming, drought or natural reproductive cycles, but insect infestations of near biblical proportions are being visited upon populations across the country.

Each region has its cross to bear. In the Maritimes, army worm caterpillars munch through grain and hay. In southwestern Ontario, dense clouds of flying green aphids descend on fields of soybeans. In sections of Alberta and western Saskatchewan, farmers already battling drought face a plague of crop-eating grasshoppers. In British Columbia and parts of Alberta, the mountain pine beetle lays waste to vast stands of lodgepole pine—B.C.’s primary timber resource. Sheila Munro of the forest industry-sponsored Mountain Pine Beetle Emergency Task Force calls it the largest insect infestation in Canadian history. “We have something here we’ve never seen the scale of before—twice the size of Vancouver Island and growing,” she says. “This, in our view, is a state of emergency.”

The names of these pests, and a host of lesser ones, are largely unfamiliar. Their impact, though, is enormous. The army worm, a dark five-centimetre-long pest with a yellow strip down its back, destroyed 50 hectares of forage on Andy Bishop’s 150-hectare farm in Annapolis Royal, N.S. “If you were quiet, you could hear them eating,” he says. “It’s eerie.”

Bishop didn’t stay quiet long. He spent $2,000 to spray pesticide. But one field was already stripped bare—“Just like you were in a desert,” he says. Eric Georgeson, an entomologist with Nova Scotia’s natural resources department, blames last winter’s heavy snowfall for protecting the worms from a killing frost. “I don’t think it’s been this bad since the 1960s,” he says.

Insecticide spraying limited army worm damage in Prince Edward Island to about 1,200 hectares. Harder hit was New Brunswick, where 12,000 hectares of grain and forage crops were affected before the worms finished their feeding frenzy and burrowed into the ground in preparation for a sequel next summer.

In Alberta, the grasshopper infestation bodes poorly for next year as the insects munch crops, mate and lay eggs. Hardest hit now are the area around Hanna, 250 km northeast of Calgary, and regions north and west of Edmonton, where the invaders destroyed entire alfalfa crops. Dan Johnson, a scientist with Agriculture Canadas Lethbridge Research Centre, found as many as 200 grasshoppers per square metre noshing on ripening fields of barley and wheat. Johnsons been tracking the infestation all year, filing reports on Agriculture Canadas Web site. If dry conditions prevail next spring, he writes, “All indications so far are for increased numbers of grasshoppers in 2002.”

Yet even the localized grasshopper infestations pale in cost and scale compared to the damage done to B.C. forests by the mountain pine beede, a match-head-sized bug with a killer work ethic. Viewed from the air, their impact is deceptively beautiful: a canopy of red trees stretches to the horizon in areas of the central interior B.C. Unfortunately, this is not an autumn scene in a deciduous forest. The red needles indicate the infested pines are dead after burrowing beetles severed the water supply lines running from roots to branches. They’re dying at a rate far beyond the province’s capacity to cut timber, and raising fears of massive wildfires.

“It’s hard to believe the millions of trees just laying waste,” says Greg Jadrzyk, president of the Northern Forest Products Association, whose members cut 23 per cent of Canadas softwood lumber. “It’s a sight unlike anything I’ve seen.” The beetle infests about $4.2 billion worth of timber—500,000 hectares of trees within an area of 5.7 million hectares. And as bad as it is now, it could be much worse next year. Unless the bugs are killed this winter by an increasingly rare cold snap dropping to at least -30 C, little can stop an estimated fourfold growth next year.

One of the first acts of the provincial Liberal government sworn in this June was to create a task force to consult with industry and 30 affected northern communities and draft a pine beetle strategy by mid-September. Experts concede there’s not much likelihood of a universally accepted strategy of mitigating the damage. If a tree falls in a B.C. forest, it doesn’t need to make a sound. A cacophony of voices speak on its behalf.

The provincial government has already boosted the allowable annual cut in Crown forests in the worst-hit areas, and industry has diverted 3,400 workers. Some are salvaging dead wood before it dries and loses its timber value or becomes a fire risk. Others conduct “sanitation harvesting” to remove small infected patches before the beedes spread. Environmental groups such as the David Suzuki Foundation call that a panicked response that will leave a swath of clearcuts and environmentally damaging logging roads while doing little to solve the problem. Talk of disaster is groundless, says Ronnie Drever, a forest ecologist with the foundation. The beetles naturally occur in pine forests, though in far lower numbers. “This outbreak is not an ecological crisis, per se,” Drever says. “It’s essentially a timber supply crisis.”

Timber supply, however, supports 25,000 families in affected communities and pours billions in royalties into provincial coffers. “There are three main agents that harvest pine forests in British Columbia: fire, mountain pine beetle and mankind,” says John Borden, a forest entomologist at Simon Fraser University. “We are in competition with the other two.” And faring poorly.

Borden likens the epidemic to an advanced stage of cancer. “It’s an absolutely extraordinary economic threat to our northern forests and to our way of life in British Columbia,” he says. As with cancer, he favours a multi-pronged attack: treating newly infected trees with herbicide, cutting living infected trees and ignoring for now the dead timber.

Then come other problems. Industry wants millions in federal aid to replant ravaged forests. There aren’t enough mills in B.C. to turn the infested trees into timber. Nor will the key U.S. market allow a flood of Canadian wood. Instead, researchers are seeking ways to store and stop the deterioration of millions of square metres of logs. That may mean keeping mountains of logs for years under sprinklers or submerged in reservoirs until they can be sold as timber.

As in other regions this summer, Borden marvels at the tiny cause of all this havoc. “They’re pretty insignificant when you hold them in the palm of your hand,” he says, “but collectively, they’re a natural wonder.” 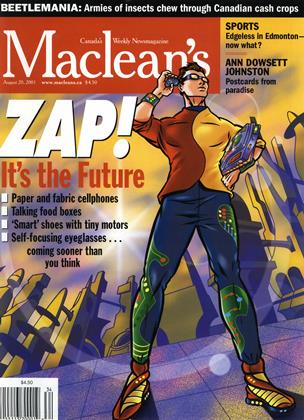