It was with such sunny pride, less than 23 months ago, that Canada and the United States inaugurated their Fort Erie, Ont., centre to speed up border crossings for commercial vehicles. Trucks could pull over well before the Peace Bridge at a processing centre, get a bar code affixed to their paperwork—and fax those papers to a U.S. customs broker. They could then shuffle off to Buffalo, N.Y., without hindrance. Today, that system has become a wistful memory. Less than 48 traumatized hours after the terrorists struck in the U.S., there was a backlog of 500 trucks in the Fort Erie Race Track parking lot. Every 45 minutes, Canadian officials allowed 20 trucks to approach customs stations— making a waiting time per truck of about 18 hours. And the lineup showed little sign of abating there—or at many other transit points across the nation. At the Pacific Highway crossing in Surrey, B.C., there was a four-hour wait. On the Windsor, Ont., Ambassador Bridge, the Canada Customs and Revenue Agency assessment was blunt and probably prophetic: “Backup is so extreme, it is impossible to estimate wait times.”

The longest undefended border in the world is under siege. The crackdown at customs was understandable after the horror of the attacks—and the initial reports, later denied, that some terrorists may have used Canada as a staging area. But it also threatens the long tradition of neighbourly relations and the very foundation of the Canadian economy. Individuals make more than 200 million border crossings each year. Two-way trade between Canada and the United States is now $1.7 billion per day, and 70 per cent of it—$ 1.2 billion worth—goes by land. Roughly threequarters of Canadas manufacturing out-

put is sold to the United States.

In short, trade in everything from automobile parts to agricultural perishables is now at risk. “Canadians who have enjoyed easy access to the United States all of their lifetimes may now be subject to much more vigilant scrutiny,” says David Zussman, the influential president of the Ottawa-based Public Policy Forum, who has been pushing for the formation of a cabinet committee on Canada-U.S. issues such as security. “Given the just-in-time economy, where people do not stock up on inventories but buy them when they are needed, we have to be able to assure U.S. customers that they can get what they need on time. If things are going to be held up at the border, we run the risk of losing large sectors of economic activity.”

Experts agree the only solution to the economic crunch is to allay U.S. fears about security. And that means, over the next few weeks, that Canada is going to have to explore everything from tighter immigration and refugee laws to the whole notion of a common Canada-U.S. perimeter that would strictly screen all newcomers at the point of entry. More pre-clearance sites for trucking operations could be established at a distance from the border. Random security spot checks at any point in transit could become the norm. Last week, U.S. Ambassador Paul Cellucci even suggested that both nations bring in common immigration policies— and then adopt a common perimeter. That would permit the removal of border checkpoints and thus “free up resources for law enforcement and intelligence.” Cellucci’s remarks were mild. But no one doubts that the Americans will now be calling many Canadian policy shots. George Haynal, a fellow at Harvard University’s Weatherhead Center for International Affairs, points out that there is no difference in the basic objectives that both nations bring to border screening: for one,

they want to keep out terrorists. Canada may find it necessary to consider a joint perimeter and enforce closely co-ordinated laws—if only to keep open the physical border. “The question that Canadian policy-makers have to be asking themselves is: what is the price that is going to be demanded—and what is going to be acceptable to us—in return for assured access?” says Haynal, former Canadian consul general in New York. He adds ominously: “The search for problems outside the borders of the United States may become very important in this country.”

Unfortunately, Canada may be unable to respond quickly to those complaints. On the day before the attacks, Thomas d’Aquino, president of the Business Coun-

cil on National Issues, convened a small group of Canadian and U.S. executives to discuss relations between the two nations. To everyone’s surprise, the discussion constandy returned to U.S. security concerns about Canada, ranging from its ability to police its border to its relatively small contribution to NATO. The group also concluded that there was no co-ordinated federal approach to cross-border issues with strong backing from politicians. “Americans are going to pour more resources and time into checking shipments—and that is going to hurt us economically,” says d’Aquino. “So there is urgency in finding ways to deal with their security

concerns away from the actual border.” In the end, however, Canada may have little choice but to do exactly what the Americans want. Two years ago, the U.S. state department fretted that sensitive military technology might pass through Canada to rogue regimes. So it abruptly removed Canada’s exemption to the U.S. International Trafficking in Arms Regulations, which govern the sale of U.S. weaponry and defence technology. Overnight, Canadian companies faced the loss of about $ 1 billion in annual sales. In vain, Canada argued against the measure. Finally, to preserve Canadian jobs and contracts, Ottawa harmonized its export-

control list with the U.S. list. “If the Americans raise the security bar, they will expect us to go along with them,” says York University defence analyst Martin Shadwick. “It has been clear for some time that they thought we were a bit lax over everything from border controls to arms exports.” Still, as border traffic slows to a crawl, Canadian officials are finding small comforts. “From a security perspective,” says Foreign Affairs spokesman André Lemay, “the mere fact that the border is still open is so phenomenal that the Europeans cannot comprehend it.” That captures both the pressures and the perilous grace of the Canada-U.S. kinship. EH 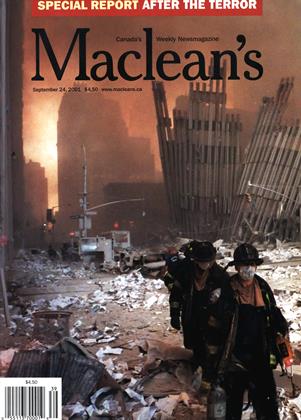