Were at the ballpark, my son and I. It's an hour before game time and were stationed in the left-field bleachers, gloves at the ready, eyes fixed on the distant plate as tiny figures bound up to take batting practice, bashing the ball around the yard, the telltale crack split-second-delayed from our perch. Were in the scavenger business out here. We calculate power and stance and the chances that each batter will club one precisely our way, for were squeezed in beside pint-size competitors with their ball caps and mitts and insistent voices.

“Hey, number 47, throw it here” the chorus cries when hits fall short and into the gloves of fielders grazing below. “Please! For mé!” Occasionally they do throw it—even seem to enjoy the give-and-take. “Who hasn’t got one?” calls a bearded pitcher, a career bush-leaguer finally making the bigs this year but perhaps still attuned to the little guys looking in. Another toss, another satisfied customer. All in all, a fine day before the official action even commences: my 12-year-old walks off with two genuine major-league baseballs and what more can anyone ask?

This is as it should be, as it should ever be: blazing sun, blue sky, gung-ho kids and baseball. They’re inseparable, ineffable, essential as ice cream. Yet something s wrong. Something’s wrong and I’m not even sure what, just that the magic’s fading, like stadium lights in the rearview mirror. OK, the particular park here doesn’t help, for this is Toronto’s SkyDome, a one-trick wonder with all the charm of a Tupperware container. Nor does the fact that the home team’s last hurrah was Joe Carter’s liner over that very wall back in ’93, jolting the Jays to their second straight World Series tide and who bitched about the stadium then?

Yes, winning washes all, but losing’s only part of the story and it’s not just Toronto. What’s happened to the game that captivated kids, made grown men blubber (and grown writers commit some notably sappy prose)—the game that became not only America’s pastime but a kind of living history, a damn-near religion? Who talks now like the legendary Shoeless Joe Jackson, as channelled by Canadian novelist W. P. Kinsella: “I’d have played for food money. I’d have played free and worked for food. It was the game, the parks, the smells, the sounds. Have you ever held a bat or baseball to your face? The varnish, the leather. And it was the crowd, the excitement of them rising as one when the ball was hit deep. ... It makes me tingle all over like a kid on his way to his first doubleheader, just to talk about it.”

Who talks that way anymore? Maybe fans in baseball bas-

tions like Boston and New York, or in American minor-league towns where the game is enjoying a surprising revival. But attendance in Toronto and Montreal has been trending downward, as they say—the Expos sliding sadly towards extinction. The Triple-A Vancouver Canadians have gone south, the Calgary Cannons are leaving next. Fewer kids are playing the game as well, in Canada and the States. Soccer’s all the rage; lacrosse is coming on, and that’s not to mention the video games and Internet chatrooms that are the universal passions of youth. Compared with all that—and with winter’s hockey and hoops—baseball’s slow, it’s boring, you stand or sit and wait, you scratch yourself and spit (OK, that last is fun).

Something’s wrong, I feel it, too, a yawning indifference lurking beneath my own love of the game. The major-leaguers get filthy rich and then go on strike; warm up to one and he skips town. Half of them don’t run out grounders. Some are muscled-up in ways nature never intended. Doping? In baseball? Say it ain’t so! It is so and the sport’s poohbahs don’t seem to care, home runs apparendy being the true opiate of the people. The rich teams rule (mosdy), the games are too long. And can someone explain why World Series games start so late at night in the East that not even adults go the distance, let alone the kids who happen to be baseball’s future? Money, I know. Regular visionaries, these baseball guys.

And yet—it’s in the blood, baseball, I couldn’t totally ditch it if I tried, the sound of it on radio as soothing as rain.

My parents lived and died—mosdy died—with the Brooklyn Dodgers; I did the same with the Philadelphia Phillies. There are worse things than learning how to lose. Baseball teaches not only sportsmanship but patience, humility—even all-stars make mosdy outs. And then, every so often, if the planets are perfecdy aligned, comes redemption: the Dodgers taking the Series in ’55 (only to leave for L.A. two years later and you can still find guys railing in Brooklyn bars); the Phillies in ’80 (I sat in the nosebleeds and have never heard a roar like it, before or since); the Jays in ’92 and ’93 with a cry of O Canada; and, heck, the East Toronto rookie ball champions of’97, a team I coached and my son played on—a kid, mind you, raised on bedtime recitations of “Casey at the Bat.” He gave up baseball a few years ago, plays summer rollerhockey now. At the Dome the other day, though, collecting stray balls, he talked about maybe going back to the game. OK by me. OK if he doesn’t, too. 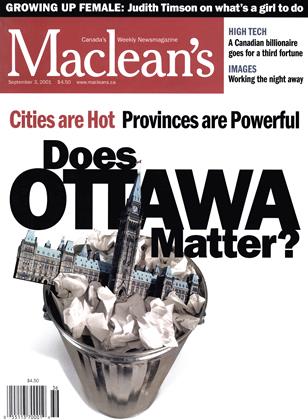