Some of the 1,400 folks living on the tiny New Brunswick island of Campobello are feeling adrift lately. It never used to bother them that their main link to the rest of Canada was an hour-long drive through the United States. But in a post-Sept. 11 world, crossing the border twice just to get into their own province isn’t as easy or as friendly as it used to be. “The people of Campobello are really being worn down, sort of stressed,” says Eric Allaby, the MLA for Fundy Isles, a riding that includes Campobello. “It’s a fundamental right that everyone else in Canada enjoys-that you

can move about your country freely. Well, the people of Campobello can’t do that.”

Residents, who cross the bridge into Lubec, Me., and then again at St. Stephen, N.B., are no longer just waved through. Now, there are regular security and ID checks. And for part of one day not long after the terrorist attacks, no one was crossing at all—a bomb threat sealed the border. Allaby wants to see an “all-Canadian alternative”—year-round ferry service, instead of just the existing summer runs. Although most islanders liked the idea in the days right after Sept.

11, Bob Hooper, a park warden who runs a Web site promoting Campobello, says some are cooling to it now.

First off, they would have to pay for it. Plus, ferry service only takes residents to Deer Island, where they have to catch another boat. Besides, Hooper says, some people like having the border crossing as the only year-round option. Although they may have trouble getting off the island, they know that only those with a clean record will be allowed on. And like the rest of the world, Campobello must now weigh convenience against se c u rity. David Stonehouse

made it into Guinness's famous book of world records. The exotic dancer is now the world’s most tattooed woman with the work of 13 artists covering her body from head to toe. Here are some other Canadian contributions found in Guinness World Records 2002:

■ Most yo-yo tricks—When Eddie McDonald was 11, he received his first yo-yo. Now 30, McDonald makes a living with the toy. In 1999, he set a world record, executing 35 tricks in one minute. His most difficult? Bal-

ancing a quarter on someone's ear and then flicking it off with his yo-yo.

■ Largest pigeon-Leonard Yeck of Brantford, Ont., owns the world’s heftiest pigeon, which weighs in at 1.8 kg.

Teaching the ropes of the Rock

^Gordon Pinsent: Newfoundland actor gets kudos for performance in The Shipping News-shot in his home province-and for tutoring the movie’s American stars on the ways of the Rock.

Defence minister could face tough questions if Canada’s forces don’t perform with Afghanistan peacekeepers. Is our military up to the high-profile job or not?

^ Brian Tobin: Under fire for failing to make good on pledge to end Ottawa’s policy of cutting equalization payments to havenot provs. Meanwhile, offshore energy revenues grow. Better to keep quiet, Brian, unless you can deliver.

Author Diana Gabaldon is no

stranger to men in kilts. Not only did she create Jamie Fraser, an 18th-century Scottish heartthrob, in her best-selling Outlander series, but on publicity tours she is often besieged by male fans dressed in tartans and plaids. Gabaldon-who recently released her fifth book in the adventure saga, The Fiery Cross, (a mighty 979 pages)-does, in fact, have a strange breed of fans, and ones that are always rabid for more. “I received a letter,” says the Arizona-based Gabaldon, “from a 96-year-old woman who wrote, ‘I hope you won’t be too long with your next book.’ ”

Gabaldon, 50, has enthusiasts in such far-flung places as New Zealand, Japan and Zimbabwe, and some of her most fervent followers are in Canada. Vancouver’s Judie Rousselle founded a worldwide group of Outlander aficionados called the Ladies of Lallybroch-the name of the Scottish town where Fraser was born. For Rousselle’s

birthday, the club asked Gabaldon to compose an ode. When the author replied that she might not be able to because she was so busy she couldn't find time to buy toilet paper, a call

went out among the Ladies and 48 packages of toilet paper from around the world landed on Gabaldon’s doorstep. How outlandish!

A young couple, dressed in jeans and well-worn shoes, stand beside a massive pine and oak dresser on the grounds of Toronto’s Casa Loma. An Englishman, impeccably outfitted in a suit and tie, carefully examines the piece while commenting on its history and the detail of the work. Several television cameras are trained on his every move and, when the BBC's Antiques Roadshow furniture appraiser, John Bly, announces the piece is worth approximately $50,000, the husband quietly kisses the top of his stunned wife’s head. “They look like ordinary people,” sighs a woman waiting her turn. “Not rich and shining or anything."

treasures and trinkets were filmed in Toronto and Ottawa last fall—the segments air on Jan. 16 (Ottawa) and Jan. 23 (Toronto) on CBC. Roughly 2,000 people from across Canada attended each of the daylong events and a tremendous treasure trove of antiques was uncovered. Nena Marsden of Sutton, Ont., brought with her an 1891 travelling mirror, a mid-18th century porcupine-quill embroidered leather coat and a letter from the governor of the Hudson’s Bay Co.

asking the famous factor James Anderson to search for the lost explorer Sir John Franklin. “This is absolutely fabulous,” gushed Roadshow’s Canadiana expert Donald Ellis over Marsden’s items. “One of the best collections I’ve seen in 24 years.” Later, after her pieces were appraised at a minimum of $60,000 (not including the historical value which, said Ellis, was priceless), all Marsden could say was “Oh my goodness.” A. C.

The one bill not locked in Canada’s vault

Within the vaults of the Bank of Canada in Ottawa lies at least one example of almost every type of Canadian coin minted or bill printed during the country’s 135-year history. One high-priced exception is the 1911 Dominion of Canada $500 note, of which only two are known to exist. This void could be filled when one of the bills goes on the auction a? block in Orlando, Fla., on Jan. 11.That I is if the central bank doesn't flinch at I the price tag-which may be as high 1 as $ 175,000 (U.S.). “This is a chance for a patriotic Canadian to repatriate the bill and bring it back home," says Allen Mincho, a director with Dallasbased Heritage Auctions, the firm organizing the sale in Orlando.

The banknote, which features a portrait of Queen Mary and the words “Ottawa” and “Jan. 3rd 1911,” was in normal circulation in the early part of the 20th century, according to Mincho. Deemed in fine condition, the bill is being sold by an unidentified American collector. The other existing $500 note is also owned by an American. These particular bills are rare and valuable because of their high denomination-and Mincho says U.S. paper money of similar rarity would sell for upwards of $1 million. “The average person didn’t have $500 to their name in 1911,” says Mincho, “never mind a $500 bill in their wallet.” Paul Berry, the chief curator with the Bank of Canada Museum, says the bank had an opportunity to buy a 1911 note last year but balked at the $100,000-plus price tag. “I’m just looking forward to seeing how this one does,” says Berry, while not commenting on whether the bank is interested this time around. >, After all, the purchase would cerI tainly make for a tough sell to the 2, taxpayer. John Intini 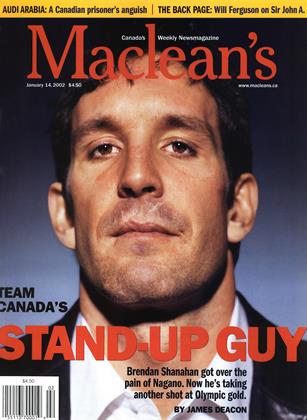