January’s unseasonably warm weather has either treated or tormented Canadians across the country. Heavy rains forced several families living on Vancouver Island to leave their homes, while on the B.C. mainland others had to flee a mudslide that briefly closed the Trans-Canada Highway near Hope. Southern Alberta is practically free of snow and temperatures reached 10° C in Regina, smashing old benchmarks. Further east, Ottawa’s

Rideau Canal was closed to skaters, while temperatures in the Maritimes hovered around the freezing point.

Israeli commandos intercepted 50 tonnes of weapons they said were being smuggled into Palestinian territory, prompting the Israeli government to accuse Palestinian leader Yasser Arafat of being involved in the scheme. While Arafat denied any knowledge of the arms, U.S. President George W. Bush said

he suspected the weapons were going to be used to foster a terror campaign to derail peace efforts. Meanwhile, two men in Palestinian police uniforms burst into an Israeli army post near the Gaza Strip, killing four soldiers before being shot dead. Israel retaliated by tearing up a runway in Gaza and detaining nine Palestinians suspected of weapons smuggling.

emergency measures to clamp down on the opposition in the runup to the March presidential elections. The new laws give police sweeping powers to jail opposition activists. Lawmakers also looked set to enact legislation prohibiting foreign correspondents from working in Zimbabwe and forcing local journalists to apply for licences; decreeing violations would carry a two-year prison sentence. Commonwealth foreign ministers meeting in London in late January will discuss possible responses, including suspending the African nation’s membership.

Stockwell Day did the expected by announcing he will run to regain the job he was forced to quit last year, leader of the Canadian Alliance. What was surprising was his willingnessright out of the starting gate-to characterize the battle he faces with Stephen Harper, his main rival, in stark

The term social conservative is often used to describe right-leaning voters, including evangelical Christians, who are active in causes like opposing abortion and securing tax breaks for religious private schools. Harper, a former

Reform MP, is usually associated with the wing of the Alliance that stresses free-market economic policy over those hot-button social issues. But so-cons were a major source of support for Day when he won the party’s 2000 leadership race.

Read the interview with Stockwell Day

Heather Reisman’s empire regrew part of itself after a deadline passed for selling off 23 of her Chapters and Indigo bookstores. There were no takers, so CEO Reisman will make the call on which outlets to get rid of. After Reisman, founder of the Indigo Books & Music Inc. chain, took over rival Chapters Inc. last year, the federal Competition Bureau listed 23 stores it said must be put up for sale. Indigo last week said it has since closed four superstores and is looking at another six or seven-not necessarily those on the bureau’s list.

Moncton, N.B. city council voted in favour of year-round Sunday shopping, a move the provincial government must still approve. The vote caused ripples across the Maritimes where weekend store openings are still restricted, prompting RE.I.’s tourism minister to suggest it may be time for the province to consider the move during tourist season. However, Nova Scotia Premier John Hamm reiterated his opposition to Sunday shopping.

Ford Motor Co. announced it would cut 35,000 jobs worldwide by middecade and close five North American plants, including a truck assembly operation in Oakville, Ont., employing 1,500 people. The closures, announced on the same day as Canada’s monthly unemployment rate jumped to eight per cent from 7.5 per cent, will be phased in according to union contracts-some time next year for Oakville.

Cindy Barkway, 31, who was five months pregnant when her husband, David Michael Barkway, died in the terrorist attacks on the World Trade Center, gave birth to a healthy sevenpound, six-ounce boy. She named the child-believed to be the first born to a survivor of any of the 24

Canadians who died on Sept. 11for his father, a 34-year-old Toronto investment banker who was visiting a bond trading firm on the 105th floor of the north tower when the first plane struck.

The administration of George W. Bush came under sudden siege in the wake of the December collapse of Enron Corp., a secretive energytrading firm and America’s seventhlargest company. As the justice department started a criminal probe and five congressional committees

announced hearings, ex-oilman Bush tried to distance his administration from revelations that VicePresident Dick Cheney and other officials had numerous meetings with Enron on energy policy and the possibility of a credit extension. Enron was Bush’s biggest campaign contributor. Enron’s auditor, Arthur Andersen LLP also admitted that its people had destroyed significant numbers of Enron documents. The company went bankrupt when a potential merger partner walked away after taking a close look at Enron’s notoriously obscure financial numbers. A handful of top executives sold about $1 billion (U.S.) of company stock before the price collapsed. At the same time, thousands of employees were barred from selling their shares and lost savings and retirement accounts.

The trii~f hockey, both sad and silty

Two hockey-related court cases-one tragic, one trivial— played out in the United States and Canada. In Cambridge, Mass., a jury convicted a hockey dad of involuntary manslaughter in the beating death of another parent during an altercation after practice in July, 2000. Thomas Junta, 44, a 270-pound truck driver, testified he struck Michael Costin-who weighed about 100 pounds lessonly three times after the two exchanged words about a practice Costin had supervised. But the prosecution argued Junta punched the much slighter man repeatedly and slammed his head on the ground until he became unconscious. The beating led to severe internal bleeding and

Costin’s death. Several children, including both men’s sons, witnessed the lethal fight. Junta faces up to 20 years in prison when he is sentenced on Jan. 25.

As for the Canadian case, it boiled down to a debate about the rights of property owners versus a popular rite of passage. Road hockey won. A justice of the peace dismissed a Hamilton woman’s charge against Gary Kotar who she claimed had repeatedly broken a city bylaw banning street sports. Nadja Ciuriak said Kotar and his four sons frequently retrieved balls that ended up in her garden. But Kotar claimed, “It is harmless fun”-a view heartily endorsed by road hockey vets on call-in shows across the country.

An ethics controversy swirls around the public works minister

Jean Chrétien, holidaying in Florida last week, must have had trouble concentrating on his golf swing. Back home, his Quebec political boss and public works minister was in trouble-and longsimmering questions about his government’s ethics were back on the boil. The charges of improper political interference against Alfonso Gagliano, 59, came from Jon Grant, former chairman of Canada Lands Co., a government corporation with the sensitive role of selling off surplus federal real estate. Grant told a Toronto newspaper that Gagliano asked him to hire an old friend and political supporter, Tony Mignacca, and the minister’s office generally meddled in Canada Lands

operations in Quebec. “The rest of Canada is yours,” Grant said he was once told by Gagliano’s chief of staff. “Quebec is ours.”

Gagliano denied he had done anything wrong. The veteran Montreal MP said he had merely recommended Mignacca for a job, and rejected the claim that he or his aides tried to influence Canada Lands decisions. Howard Wilson, the federal ethics counsellor, said he won’t investigate-because he’s already told the Prime Minister how the ethics code governing ministers ought to be reformed.

Chrétien’s office didn’t deal with the details of the controversy, but said the Prime Minister remains confident of Gagliano. Opposition critics, of course, called for

Gagliano’s resignation. But Chrétien has a long track record of standing by ministers who come under fire. The timing of this uproar could delay a cabinet shuffle. Chrétien was rumoured to be planning to reassign some ministers this month, perhaps sending Gagliano into retirement or a patronage job. Now, doing so might be interpreted as an admission that a staunch Chrétien ally has become a political liability—a message the Prime Minister will be loath to send.

In fact, the specific points raised by Grant, now chairman of the Laurentian Bank of Canada, are far from the only questions surrounding Gagliano’s department. The federal Auditor General has repeatedly criticized the way Public Works and

Government Services Canada has done business in recent years, taking the department to task for not putting most consulting contracts up for competitive open bids-leaving the selection of those to do work for the department open to “political or bureaucratic favour.” More broadly, the practice of patronage remains firmly entrenched throughout the government. The latest directory of Governor in Council appointmentsfederal jobs prime ministers have historically used to reward friendslists 2,246 such positions, down only slightly from levels when the Liberals took power on a platform that slammed the Tories for making “a practice of choosing political friends” for such posts. 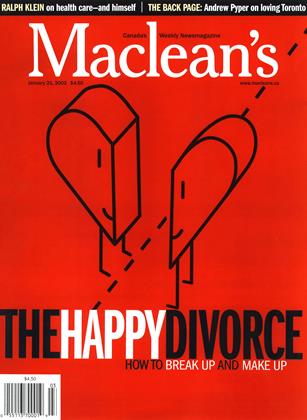