"It's such an obvious story,” Bernice Morgan says of her first novel, Random Passage, which traces the remarkably unforgiving lives of the first settlers on the coast of Newfoundland at the turn of the 19th century. Morgan is sitting in the living room of her St. John's home, the large front window dominated by the maple tree she planted with the first money she earned as a writer—a $50 prize in the provincial Arts and Letters Competition in 1958. “All my adult life,” she admits, “I had been looking for the book, waiting for someone to write it.” As it turned out, no one did. Eventually, Morgan took on the task herself.

For a decade, she developed the story piecemeal in her head as she raised a family and worked in public relations for the provincial teachers’ association. At 51 she quit her job to begin what became an 800page draft, a multi-layered, multi-generational historical novel tracing the brutal hardships and small triumphs of the fictional community of Cape Random.

As Morgan discovered, writing the book

was only half the batde. She found a sympathetic reader in Jack McClelland who, among other changes, suggested halfjokingly that she set the story in Maine. Elis years in Canadian publishing convinced him a story about Newfoundland would have trouble finding a home outside the island. Even after Morgan edited the mammoth draft down to two separate novels, McClelland couldn’t convince any mainland publisher to read them.

Random Passage was eventually published by St. John’s-based Breakwater Books in 1991. The initial reception, Morgan says, was “devastating.” It went un-reviewed for six months and seemed to disappear. “I comforted myself by saying, At least it’s out there. It’s been done, it’s out in the world.’ ”

Clearly, many people besides Morgan had been waiting for this story. In the 10 years since its inauspicious debut, Random Passage has been reprinted 10 times and sold approximately 40,000 copies, almost solely by word of mouth. International publication deals have brought the work to Ireland and Germany. And three years after it first appeared, Morgan received a phone call from veteran St. John’s film pro-

ducer Barbara Doran, who optioned the rights. Starting on Jan. 27, almost a quarter century after Morgan began piecing the story together in her head, CBC Television will broadcast the four-part, eight-hour miniseries based on Random Passage and its sequel, Waiting for Time.

Now 66, Morgan is currently working on what “may turn out” to be another novel. Meanwhile Random Passage continues to grow in popularity. She points at the tree on the front lawn, the largest branches reaching well in over the eaves. “My father told me it was set too close to the house when I planted it 40 years ago,” she says. “You wouldn’t believe it at the time, it was such a tiny thing. And now look at it.”

Like the books that inspired it, TV’s Random Passage is an ensemble piece with a number of overlapping story lines. The large cast includes established actors such as Ireland’s Colm Meaney, as standoffish Irishman Thomas Hutchings, Canadian Deborah Pollitt as Lavinia Andrews, and Newfoundland staples Mary Walsh and Andy Jones playing a wealthy St. John’s merchant couple. But the centre of the miniseries is Irish newcomer Aoife McMahon as the fiery Mary Bundle. Orphaned during the Irish clearances, thrown out of service in St. Johns after resisting the sexual advances of her employer, abandoned by the thieving father of her child, Mary takes a job as cook on a ship she’s been told is returning to England. Discovering the Tern is only a coastal boat, Mary sneaks ashore to the tiny fishing village of Cape Random to escape a crewman intent on having his way with her.

Many of the people Mary finds on the Cape are running from troubled pasts as well. The Andrews family has been run out of its home in England after the local merchant unjustly accused son Ned (Newfoundlander Daniel Payne in his television debut) of stealing fish. Cape Random’s merchant representative Hutchings, who grudgingly takes in the newcomers, has secrets of his own.

Dependent on one another simply to survive, members of the small community throw themselves into the relentless, often brutal work of the fishery. In good times, the returns allow them to put up a rough

schoolroom, a small church; in bad, simply warding off starvation through winter is the goal. Through it all, Mary sets her mind to building a life for herself and her daughter. Willing to work as hard as any man, she learns to count and figure well enough to avoid being cheated, while setting her calculating sights on the most promising of the villages bachelors. It’s her struggle to find a home, a goal undercut by her fundamental mistrust of everyone, that animates each episode.

Random Passage reunites Des Walsh and John N. Smith, the writing and directing team behind the award-winning The Boys of Saint Vincent. Their small-screen adaptation is faithful in spirit to Morgans writing and, as far as television allows, to the realities of the life people suffered through at the time. But the complexity of the characters’ internal lives, which is the most compelling aspect of the novels, is often sacrificed here to the expedience of telling the story. The first episode in particular suffers in this respect, covering too much ground too quickly. Minor players, such as

the thief Tim Toope or the lascivious merchant Mr. Armstrong, exist simply to move the plot forward and are so predictable in this role that they threaten to reduce everyone around them to caricature.

In later episodes, it is largely the persistence of affliction, and the persistence of the Cape’s residents in the face of each succeeding loss, that rescue the miniseries from simple melodrama. Marys marriage to the irrepressible Ned, and the long, largely unacknowledged courtship between Neds sister Lavinia and Hutchings, are fairly standard fare. Ultimately, however, it is the relationship of each person to the place itself that lies at the heart of Random Passage. Those not “made for the Cape” fall victim either physically or mentally to the gruelling conditions, or leave in hopes of an easier life in St. John’s. Those who remain cultivate an incongruous sense of belonging and pride of place that somehow sustains them through the worst fate throws their way.

The person who seems most unlikely to make a home of the Cape through much of Random Passage is Lavinia. Having reluctantly given up a good position in a wealthy house in England to keep her family together, she never quite manages to stop pining for the life left behind. Mary dismisses her ennui as simple laziness or lack of will, but there is something more elemental that keeps Lavinia from reconciling herself to Cape Random. For her, England is the real world. The Cape is the rim of a dark unknown hinterland facing an unending sea, a place that makes even the thought of “a life” seem ridiculous.

In Bernice Morgan’s version of the story, Lavinia comforts herself by filling the pages of a journal with the names of local boats, flowers, leaves, birds and shells, as if she were “creating a world, pinning it down.” More than anything, Lavinia “longs to see a map of the Cape, of the Newfound Land, a map showing just where she is in the world.”

It was probably something akin to this longing that led Morgan to begin imagining the untold story of Newfoundland’s settlers nearly 25 years ago. Appropriately enough, the novels she created, and the miniseries they inspired, have become an essential part of that map themselves. ESI

Michael Crummey is the author of River Thieves, a 2001 Giller Prize nominee 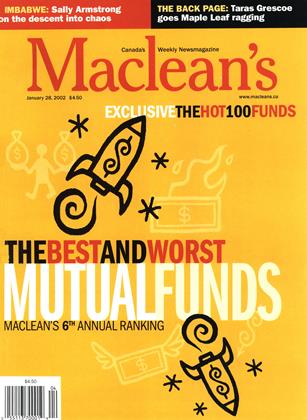