HOW DO YOU PREVENT what you can’t predict? Since the beginning of October, professional terrorists—or their amateur admirers—have destroyed a discotheque in Bali, blown a hole in an oil tanker offYemen, and taken over a theatre in Moscow. They’ve slain a U.S marine in Kuwait and bombed a bus in Manila. Last week, it was South Africa, with a series of explosions in black neighbourhoods—police blame white supremacists—and Jordan, where an American diplomat was gunned down in his driveway.

Closer to home, snipers, with a foggier political agenda but no less deadly intent, killed 10 people in the suburbs of Washington, and panicked millions more. Not to mention countries like Israel and Colombia, where exceptional acts of violence have become commonplace aspects of daily life. The threat of terror seems to be generalized, and mutating faster than the West can impose its curatives.

In the 14 months since the attacks on the World Trade Center and the Pentagon,

Western governments have spent a large part of their energy and billions of dollars trying to uncover terrorist networks and thwart their many-faceted plots. Whatever successes they’ve had, and horrors we’ve been spared, their victories have been far from decisive. In the wake of the shooting of diplomat Laurence Foley—a man who epitomized what is good about U.S. foreign policy, having spent the past 37 years bringing aid to the poor of India, Bolivia, Zimbabwe and Jordan—a State Department spokesman summed up the problem in the euphemistic language of the bureaucracy. “All over the world,” he said, “we’ve seen that when we are better able to protect what

you might call the hard targets, they tend to go looking for other things.” Translation: the war to secure power plants, military bases and embassies seems to be going OK, but vacationers, business travellers and mass-transit users might want to buy some extra insurance.

It’s an ugly 21st-century reality that Australians are fast starting to comprehend—87 were victims of the Bali blast that also killed two Canadians. Alexander Downer, the Australian foreign minister, who was in Ottawa for meetings with Bill Graham last week, tried to pass on some of that painful wisdom. “These terrorist operations are directed, not just against the United States, but what we might broadly describe, particularly Canada and Australia, as our civilization,” he said. Prior to the attack, opinion polls suggested the vast majority of Australians—as is also the case in Canada—thought themselves unlikely targets. “I think Australians who said that, and Canadians who say that, are wrong,” said Downer.

John Thompson, an expert on international terrorism with Toronto’s Mackenzie Institute, says the invasion of Afghanistan has deprived al-Qaeda of one of its safe havens, but has had little effect on its capability to inflict damage. Most of its leadership survived, recruits still flock to the cause, and its loose global network of like-minded groups remains in place. Seemingly random attacks, like those in Bali or Jordan, will be the norm for years to come, he says.

Canada has already been the staging ground for one of history’s deadliest acts of terrorism—the 1985 Air India bombing, which killed 329 people, most of them Canadians. People who persist in thinking

terrorists take the colour of the passport into account when they select their targets are in for a rude awakening, says Thompson. “Al-Qaeda hates the Western world. And they don’t make much of a distinction between an American, a Frenchman or anyone else.” The panic that greeted homegrown incidents of terror like the Washington shootings and last fall’s anthrax letters has been noted abroad. “Bombs in shopping centres, bombs in theatres, chemical attacks,” Thompson says, ticking off the possibilities. “That day is coming so fast, it’s not funny.”

There is a lot to be afraid about. Yet, despite the dire warnings of government and experts, and the klaxon call of the media, the public remains stubbornly rational. Cloudbursts of mass anxiety, like the panic that followed Sept. 11 or the anthrax scare, subside into gentle showers of apprehension. Terrorist attacks in faraway places—no matter how deadly, and regardless of how quickly the gruesome pictures arrive in our living rooms—

mostly fail to make a lasting impression. North Americans go on with their lives.

Jennifer Lerner, a psychologist who teaches social sciences at Carnegie Mellon University in Pittsburgh, studied the reaction of Americans in the immediate aftermath of Sept. 11. At that time, a full 21 per cent of those surveyed felt that they were likely to become victims of terror in the next year. “In order for 21 per cent to be true, we’d have to have something much greater than Sept. 11 every day of the year,” says Lerner. “Based on the U.S. population, that would mean 50 million people.” But even with all those imagined casualties, the dominant emotion researchers found among Americans was

rage, not dread. Fear makes people feel powerless and in need of protection, says Lerner. Anger has the opposite effect, reducing people’s perception of risk.

Which brings us to Saddam Hussein. A year after Lerner and her colleagues completed their survey, Americans, it seems, are still a lot more mad than frightened. For months, George W. Bush and senior members of his administration have been doing their best to scare the hell out of the public. Iraq is a rogue nation and the number one threat to world security, people like Colin Powell, Dick Cheney and Condoleezza Rice have regularly intoned on Sunday-

morning political shows. Saddam Hussein is actively engaged in trying to build weapons of mass destruction, they have told Congress, the United Nations and friendly governments. Yet much of the American public, and most of the rest of the globe, remain unconvinced that whatever danger exists is pressing.

Two opinion surveys, released last week, found that support for war is slipping in the United States. One, by the Pew Research Center, shows only 55 per cent now favour military action of any kind against Iraq, down from 64 per cent in mid-September—with support dropping to 27 per

cent if the U.S. isn’t joined by its allies. According to Gallup, only 25 per cent of respondents now want an immediate invasion, while 60 per cent are willing to give diplomacy more time to work. The same surveys show the weak American economy is now the top concern of voters south of the border, outstripping Iraq or any broader worries about terrorism.

For Republicans, who have spent much of the political capital they were handed after Sept. 11 on the Saddam issue, the results must be discouraging. Security fears, which were supposed to play such a large role in this week’s mid-term U.S. elections, now

appear to be a secondary consideration for most people. “I don’t think the Bush administration has been that effective in getting its message across,” says Leonie Huddy, a political scientist at the State University of New York at Stony Brook. “People are skeptical about how dire the threat is.” The consensus-political and public—about the need to destroy al-Qaeda doesn’t extend to Iraq. “The connection between the terrorists and Saddam Hussein hasn’t been convincingly made,” says Huddy. “He has been portrayed as an enemy of the United States for an awfully long time, so the question people are asking is, why go to war now?”

Canadians, who are generally more reluctant to embrace the politics of fear than our neighbours to the south (as typified by our differences on issues of crime and punishment), seem even more dubious about the dangers posed by Iraq. A recent poll found only 35 per cent support in this country for a multilateral attack on Saddam Hussein, though 31 per cent said they wouldn’t

be unhappy if someone assassinated the Iraqi dictator.

The power of terrorism is that it taps into some of the most basic types of fear—fear of death, fear of the unknown, and fear of the irrational. Acts like hijacking a jetliner and flying it into an office tower, or detonating a couple of tonnes of fertilizer outside of a crowded nightspot, or randomly shooting people as they fill up their gas tanks, are the perfect synthesis of malevolence and randomness. They can’t be justified or explained, and therefore fill us with dread.

The only thing that keeps people going— especially in those places like Israel where an everyday act like riding a bus has become a form of Russian roulette—is the even greater power of the human intellect to ignore or rationalize away apprehensions. What we can’t control, we close our eyes to, trusting that fate or a higher power will protect us. (It was perhaps in that the-numbers-are-on-our-side vein that the Washington Post, during the height of the sniper

crisis, cheerfully informed its readers that their risk of being killed was about one in 517,422. )

Ignorance, however, is not bliss. There are costs—social, economic, and personalassociated with living in the type of society where you have to worry about what’s inside the cars parked along your block, or wonder about what’s been stuffed into the backpack left under a table at the fast food restaurant. Canadians, and to a lesser extent Americans, still haven’t completely grasped the situation they find themselves in. And to hear the experts tell it, the question is how much longer we can afford the luxury of not living in fear of the things we can’t prevent or predict.

Ultimately, both sides in the war on terror are using fear as a weapon. If you want to know who’s deploying it more effectively, think back 14 months ago to a top 10 of your biggest worries and worst nightmares. Compare that with now. lîfl 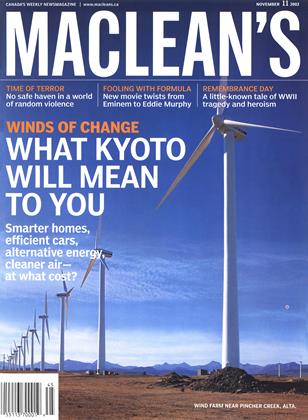