YOU HAD TO KNOW the Net wasn’t going to be free forever. Back when companies poured their resources into paving their little stretch of the information highway, there weren’t many toll booths to slow down Web users. Popular sites like CNN.com, Salon.com, SportsLine.com and Toronto-based Trailervision.com offered news, fantasy sports games and streaming video at no cost, all to build as much market share and generate as many clients as they could. Newspapers like the Globe and Mail offered scads of on-line financial information, gratis. Or users could listen to a major league baseball game for free 2aMLB.c0m, send e-mail birthday cards from Blue Mountain without forking out postage and check their Hotmail accounts even if they were far from their home computer. Wherever they clicked, a virtual noonday buffet of resources, information and entertainment—complimentary, of coursespread out before them.

But you know what they say about free lunches. When the tech bubble burst, advertising revenue and investment plummeted. Failed dot-coms littered cyberspace, and companies that had once been screaming for bandwidth now screamed for BandAids. CNN and ABCNews.com made accessing streaming video clips a paid-for privilege, Encyclopaedia Britannica started charging for reference material, the Globe set up a premium financial site, and e-games and e-cards now came with an e-price. Giants like Microsoft, Yahoo! and Apple, which had attracted hundreds of millions by offering free e-mail, either scaled back or scuttled their free programs, replacing them with fee-based services. One by one, popular destinations and niche sites started urging folks to hand over their credit card numbers. And like it or not, it’s a trend long overdue, according to industry observers. “Basically, the everything-is-free, advertisingsupported model died with the tech crash,” says Olivier Travers, a French on-line marketing expert who contributes regularly to a Weblog discussion called The End of Free. “It’s more of an anomaly for the consumer not to pay. Reality has caught up.”

But are consumers willing to face that reality? According to the Online Publishers Association, an industry organization made up of some of the biggest content providers on the Web, Net surfers are at least starting to change their freeloading ways. Last year, U.S. users dished out more than $1 billion

ment, or matchmaking. News and sports, greeting cards, directories and reference sites account for much of the rest.

But of the estimated 1,700 paid sites out there, the elites grab most of the cyber pieabout 85 per cent of U.S. paid content comes from a mere 50 sites. The biggest of the bunch is Seattle-based RealNetworks, which made US$21 million in subscription revenue in its most recent quarter alone. It has more than 850,000 subscribers, mainly for its RealOne SuperPass, a US$9.99 monthly deal that buys access to sports and news services like CNN’s streaming video and MLB.com’s live baseball broadcasts. Next on the list is the Wall Street Journal with 600,000 subscribers paying either US$39 or $79 a year, depending whether they subscribe to the print version. Match.com, a dating site, rounds out the top three.

While the allure of millions in Web-based revenue may be the prime motivation for charging, many Web sites, including Canada’s Trailervision.com, say they need payment just to survive. When Trailervision hit the big time, its monthly visitors—and operating costs—exploded. Thousands logged onto the site, which shows spoof movie trailers, to view such hits as Rung Fu Jesus and Harry Potter, Hidden Dragon. The company’s monthly communications bill shot up, prompting it to start selling memberships for $5 a month or $20 a year. “It was an unmitigated disaster,” says Albert Nerenberg, the 40-year-old president. “Our success put us so close to the edge, we had no choice but to charge.”

And why shouldn’t companies charge for what they produce? asks Rick Broadhead, coauthor of the Canadian Internet Handbook. “It’s hard to build a business case for a service you’re not generating any revenue for,” says Broadhead. “As a consumer, if you find value in something, you should be willing to pay for it.” That’s an argument Toronto’s Richard Caddoo buys, sort of. The 29year-old Canada Customs employee is a baseball fan and listens to Vin Scully’s L.A. Dodgers broadcasts over the Internet through MLB.com. Besides being able to listen to any of a night’s big-league ball games, Caddoo can also access historic games that have been archived on the site. “I’d rather not have to pay, but I think it’s worth it,” says Caddoo, whose credit card is debited $16 each month. “I’m a big baseball fan.”

But while some surfers are breaking re-

luctantly with the long-held belief that the Internet should be free, the vast majority are not yet willing to pay for anything. According to a survey by New York-based Jupiter Research, nearly two-thirds of Web users say they would stop visiting a site if free access was halted. And even if consumers do pay, says Jim Carroll, who co-authored the Internet Handbook with Broadhead, they’re going to be selective. “How much of an information budget does a family have?” asks Car-

And that’s the crux of the issue for businesses, especially in on-line publishing, where, unless a Web zine or electronic version of a city daily offers something unique, consumers will look elsewhere. “Every newspaper on the planet would like to be like the Wall Street Journal,” says Carroll. “But that’s not going to happen.” If a Canadian national publication started to charge for its Web content, he says, “I’d say goodbye. I’ve got a choice.”

On-line publishers know this. Mixing premium and free content is one possible solution, says Carroll. Several of the Web’s most popular destinations do this, including Salon.com and the Internet Movie Database. Many newspapers charge for archived stories or horoscopes and crossword puzzles. In Canada, Bell Globemedia, parent of the Gbbe, owns fee-based sites including TSN.ca’s fantasy sports games and GlobeinvestorGOLD, a premium business site. “The Internet started off as a free service,” says David Keith, a senior vice-president at Bell Globemedia Interactive. “And that expectation has stuck. Moving people away from that is tough.”

The toughest may be trying to wean people away from totally free e-mail, a firmly entrenched Web tradition pioneered by the Hotmail service bought in 1998 by Microsoft. Earlier this year, Microsoft and competitors Yahoo! and Apple all modified their free e-mail services. Hotmail and Yahoo! Mail are still free, but the extras, such as forwarding or extra storage, cost up to $29.95 a year. Apple completely scrapped its popular iTools service and replaced it with .Mac, charging $ 15 9 a year for a broad e-mail and storage package. Consumers were outraged. In a typical message-board response, someone named Digital Dogcow wrote of Apple’s CEO, “I’ve always been a loyal Apple user, but big Steve Jobs can stick his .Mac where the sun don’t shine.”

Still, Apple’s decision was a simple one, says Peter Lowe, director of marketing consumer applications. “We had to decide that if we were going to continue to invest in that kind of a service, we needed to generate some revenue to offset its costs,” Lowe says. “Obviously, we don’t think we have to provide free services irrespective of market conditions.” Freeloaders, listen up. The Internet is taking notice of the bottom line. Will you? Hfl

Here’s an idea of what Web surfers would have to pay per year if they still wanted it all, without duplicating services. Canadian $; amounts have been rounded. 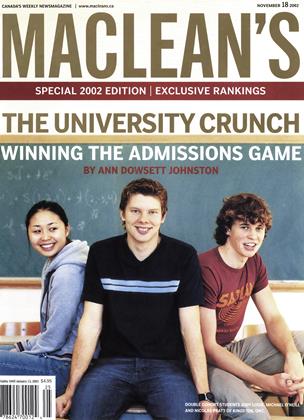