“AS YOU ASSASSINATE, so will you be, and

as you bomb, so will you likewise be.” The chilling message, possibly delivered by Osama bin Laden on an audio tape broadcast on the Arabic-language TV station alJazeera, was aimed not only at the United States but also its allies: Great Britain, France, Italy, Germany, Australia—and Canada. On what may be the eve of a U.S.-led war against Iraq, the threat of further terrorist attacks, not just in the United States but also here, sent a shudder of fear across the country. U.S. Secretary of State Colin Powell played to that during a late-week visit to Ottawa. “It is not just the United States that is in the sights of terrorists,” he said. “As you saw from this tape, Canada is just as vulnerable.”

The only answer, the U.S. says, is a wholehearted commitment to the war on terror. In Washington’s case, the next step in that campaign is the removal of Saddam Hussein. But while Canada is in the U.S. camp—“allied to the iniquitous American govern-

ment,” in the words of the infamous tape— Jean Chrétien and his front-line ministers are still ambivalent on Iraq, and resisting the stark position enunciated by the U.S. and Britain. No indelible line in the sand for Ottawa—at least not yet.

The unanimous UN Security Council resolution on Nov. 8 demanding Saddam submit to unfettered weapons inspections or face “serious consequences” would at first blush appear to have settled the matter. It did for Washington. Iraq has accepted the terms— now, if Saddam goes back on his word, and even if the UN vacillates on what those se-

rious consequences are, “the United States with like-minded nations will go and disarm him forcefully,” Powell said in one interview last week. Lest there be any misunderstanding, he repeated the message in Ottawa: “This time he must come clean, he must be disarmed and he will be disarmed— one way or another.”

But Chrétien doesn’t see it that way. “The onus is now on Iraq to meet its international obligations,” he said in a statement following the UN resolution—which Canada had pushed for. “Failing that, the Security Council will reconvene immediately to consider the situation.” In other words, war if necessary, but only if the UN says so. And if there is no UN support for military action? (The difference between “war” and “serious consequences”—the latter a semantic compromise between the U.S. and France, no huge fan of American foreign policy—could, in the world of diplomacy, be immense.) Chrétien would find the sidelines uncomfort-

able, watching British and U.S. jets buzz over Baghdad. Former foreign affairs minister Lloyd Axworthy, a leading proponent of soft power, admits Ottawa would come under intense pressure to support the military overthrow of the Iraqi regime, even without the Security Council’s blessing.

So why vacillate, asks military historian Jack Granatstein. Canada is already seen as a staunch U.S. ally by terrorists, so we will likely get blamed in the event of a conflict. “And we’ll get no credit from Washington for being dragged in at the last moment because when our support was really needed, in the beginning, we weren’t there,” he says. Chrétien repeatedly sent mixed signals over whether Canada would take part in an invasion of Afghanistan to help root out al-Qaeda nests, then practically went begging to Washington to join the battle. The result is that Ottawa got minimal thanks from the U.S., says Granatstein, adding, “It’s dumb.”

The government’s defenders say there are good reasons to keep all options open. Most Canadians, according to polls, still do not favour a forced regime change in Iraq. For many, the demonization of Saddam Hussein is a personal Bush-family agenda. Nor is there any proof Iraq is directly implicated in international terrorism, adds Axworthy. And an attack against Iraq would represent a marked break from Canadian tradition. Canada has served with distinction in numerous 20th-century conflicts—two world wars, Korea, the Persian Gulf and Afghanistan, among others—but only against enemies judged by Western powers to have seriously flouted international norms. Regardless of Saddam’s past sins, Axworthy

points out, the Iraqi leader has been confined to his box the past 11 years. “The case against Iraq has simply not been made,” he says.

By necessity, any Canadian participation in an Iraqi campaign would be modest. A Senate committee reported last week that Canada’s military is in such sorry shape that it should wrap up international operations within six months and regroup. That doesn’t mean the military has no assets. Canadian snipers distinguished themselves in Afghanistan and could prove valuable in Iraq. Canada could deploy warships. On the negative side, Granatstein says, “we don’t have any transport and our fighters are incapable of operating effectively with the Americans or British.” Not to mention the fact that the Department of National Defence would likely need six months to patch together an infantry battalion similar to the one dispatched to Afghanistan.

Canada’s allies are well aware of our military limitations. In fact, says Michael Mandelbaum, a professor of American foreign policy at Washington-based Johns Hopkins School of Advanced International Studies and author of the recently published The Ideas That Conquered the World, the U.S. is likely

For many Canadians, Washington’s demonization of Saddam Flussein is nothing but a personal Bush-family agenda

neutral on Canada’s participation. Mandelbaum says reports in the U.S. suggest military planners envision a war of short duration requiring at most 200,000 troops. In that scenario, Mandelbaum points out, “allies can come to seem a mild handicap militarily because there are greater problems of coordination.”

During the Afghan operation, U.S. officials grumbled privately that Canadian troops were ill-equipped, taxed American airlift capabilities and even lacked proper rations. (Some also blamed communications problems for the friendly fire tragedy that resulted in four Canadian soldiers being killed by a U.S. missile.) But Mandelbaum adds that Washington would welcome early and strong political support from Canada and would expect that it play a role in the reconstruction of Iraq. “The American attitude would be an understanding of countries that don’t want to contribute blood during the war, but a resentment of countries than don’t want to contribute the treasury after the war,” he says.

Ultimately, as with Afghanistan, it may be the Canadian government that winds up pushing harder for inclusion in an Iraqi campaign than the United States is pulling. Granatstein believes much of the current ambivalence about being counted in Powell’s list of “like-minded nations” stems from reflex anti-Americanism. But Canada is almost certain to eventually find itself fighting side by side with the United States and Britain, its two historic allies, should Iraq renege on its pledge—regardless of whether the UN finds wiggle room between “serious” and “military” consequences. Then the question allies may well pose to Canada might be, “What took you so long?” [TO 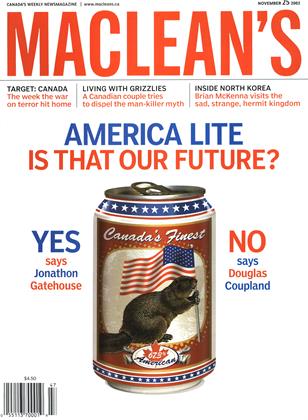