LIGHTING UP THE WORLD

LIGHTING UP THE WORLD

THE PHANTOM OF THE COURT

Why it took four years to charge Garth Drabinsky

IF THERE’S ANYTHING Garth Drabinsky hates, it’s being videotaped while walking. A childhood bout of polio left him with a pronounced limp. In the old days, when the flamboyant, irascible impresario called the shots, he’d almost never let us shoot him this way. But there was no avoiding the media pack after his bail hearing last week. He had quietly surrendered to police in the morning to face 19 counts of fraud, totalling half a billion dollars, for allegedly cooking the books at Livent Inc., his defunct live theatre company. The walk to a waiting van may have been agonizing, but at least he wasn’t paraded in front of the cameras in handcuffs like so many American execs accused of corporate fraud. He even fared better than his long-time partner Myron Gottlieb, who had to wear the cuffs in court.

The circumstances of Drabinsky’s arrest have spared him at least a little public humiliation. And for that matter, the whole process appears to be easier in Canada. It’s been four years since the RCMP’s commercial crime section carted away hundreds of boxes of documents from Livent’s Toronto headquarters. “We’ve taken four years because we wanted to do a thorough investigation. It was complicated and complex,” said Det. Insp. Craig Hannaford. U.S. authorities had enough evidence to lay criminal charges against Drabinsky back in 1999. He never returned to face them, preferring to wait for Canadian justice.

In the last few years, Drabinsky has handled life as a fugitive with style, staging an award-winning show called The Island and, just two days before his arrest, a triumphant presentation for the Toronto Argonauts involving former heavyweight boxing champion Muhammad Ali. This is not the first time he’s reinvented himself. He started Livent in 1989, after losing Cineplex Odeon Corp. in a nasty takeover battle. Before it collapsed nine years later, Drabinsky became as big a star as the actors in his megamusicals, which include The Phanto?n of the Opera, Ragtime and Show Boat.

Some lawyers say there are procedural factors, such as differences in disclosure rules, in why it took so long for Drabinsky to be charged, compared with the U.S. “There are a lot of reasons why it can be slower,” says forensic accountant Al Rosen, “but it’s not a four-year excuse.” Rosen says the job should have taken two years at most, but the RCMP doesn’t have the money or the talent to move more quickly.

Then there’s the question of how motivated Canadian authorities are to go after corporate fraud. “All the time, I find extreme reluctance to call people to account, and to appear to be going against business people,” says Rosen. But despite the delay, the RCMP is publicizing Livent in a way that is rare in a commercial case. Officials took care to call a news conference just before the bail hearing. That way, they could talk a little about the charges on the record before a judge could slap a publication ban on the proceedings. And then, although Hannaford denies a connection, there’s the U.S. example. “A lot of this has to do with the fact that corporate fraud is the flavour of the

month in the U.S.,” says Harry Glasbeek, professor emeritus at Osgoode Hall Law School. “The fact that he’s being prosecuted in the U.S. and refuses to go there had to attract the RCMP’s attention, and create pressure and excitement.” Glasbeek and other lawyers wonder if the Mounties would have pursued the case had there been no U.S. charges.

Whatever the motives, what counts is that the RCMP has moved against a corporate bigwig for one of the few times in its history. Before his arrest, Drabinsky’s final photoop was with a group of heavyweights, including Ali and George Chuvalo. It looked like that would be a fitting swan song for Drabinsky, in his latest incarnation. But days later, his influence on popular culture and capital markets was still at the forefront. Two-hundred people gathered for a gala entertainment evening to celebrate the 150th anniversary of the Toronto Stock Exchange. The finale for the black-tie affair: Garth Drabinsky’s Phantom of the Opera. 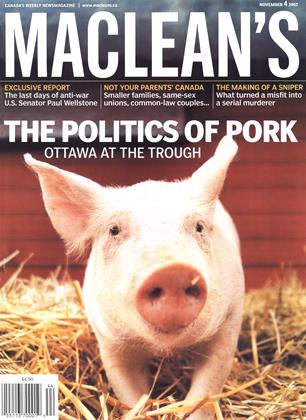