ON A COLD January afternoon three years ago, novelist and teacher David Bergen was walking home from his day job at Winnipeg’s Kelvin High School when he spotted a teenage girl seated on the railing of the Maryland Bridge, her legs dangling above the Assiniboine River. She was leaning forward, and appeared intent on jumping. Pedestrians and cars went by; no one did anything. Bergen approached and managed to pull the girl onto the walkway and pin her down as she struggled. He asked two passing girls to run for help to a nearby hospital where, as it turned out, the teenager was a psychiatric patient. “I recall her anger, her sullenness, her lack of speech,” says Bergen. “It struck me that she was very young and very drugged.”

Bergen, 45, never heard what became of the girl he rescued, but she stayed with him. In his latest novel, The Case of Lena S., the title character is a suicidal, sexually provocative 17-year-old Winnipegger, and the struggle on the Maryland Bridge is described almost exactly as it occurred. One of five finalists for this year’s English-language Governor General’s fiction award, Bergen’s novel revolves around the tortured, and sometimes twisted, relationship between the seductive Lena Schellendal and the unfortunate object of her desire, 16-year-old Mason Crowe. Bergen, who obviously knows this territory well, manages to plumb the messy, conflicted and always intense teenage psyche with both humour and pathos. The result is one of the most poignant, and ultimately disturbing, novels of the year.

As with Bergen’s 1993 collection of short stories, Sitting Opposite My Brother, and two novels, A Year of Lesser (1996) and See the Child (1999), the new book spotlights the untold harm humans can wreak on those they

But they are far from stupid. Mason is an aspiring, well-read poet. Lena aces exams on classic Russian novelists even as she speculates crudely on the sexual proclivities of their English teacher, Ms. Abendschade. As the teens’ relationship intensifies, Lena uses sex as both a sword and a shield. At one point, we are told that Lena “broke Mason’s heart. Because in her brazenness she seemed innocent, lost. But she sensed his pity and she pushed it away as she leaned forward and kissed him and said, ‘Let’s f—, Mason Crowe.’” Bergen is deft at depicting the all-consuming horniness of adolescence. Before Lena arrives on the scene, Mason is lusting after an older girl, Seeta Chahal. “Seeta lifted an eyebrow,” writes Bergen, “ft was thick and black and there didn’t exist in the world an eyebrow more beautiful.” But in the next instant, Mason is coveting his older brother Danny’s jilted girlfriend, especially after she confides that his brother was “inventive” and a “pervert,” but she enjoyed everything about their sex life. Mason finds himself wondering “what exactly she meant by inventive, and if she was so willing, what was she so willing to do?”

In fact, Mason’s unfulfilled sexual longings encompass everyone from his English teacher to his own mother, an attractive woman who is in the process of abandoning Mason’s father for a wealthy suitor. But it’s only Lena

he really loves and to whom he remains fiercely loyal even when she shuns him following her suicide attempt. Mason knows Lena spells trouble, but he can’t help himself. She has, at least temporarily, spoiled him for saner girls.

At first blush, the lanky and affable Bergen seems an unlikely source for such explicit fare. Born in the fishing village of Port Edward, B.C., he was the fourth of six children raised in a devout Mennonite household. A minister’s son, Bergen spent parts of his childhood in rural Saskatchewan and Calgary before landing in Niverville, Man., 32 km south ofWinnipeg, at the age of 12. His upbringing was strict: no movies, no dancing, very little television (Hockey Night in Canada was a happy exception). While he enjoyed playing basketball, Bergen describes himself as a bookish kid who read everything from “total crap” to literary classics. He dabbled in writing at a young age, winning the $1 first prize in a Grade 7 short story contest—a harbinger of the lean economic realities facing Canadian authors.

After high school, Bergen spent two years at a Mennonite Bible college in British Columbia where he met his wife and fellow Manitoban, Mary Loewen (they have four children, aged nine to 16). They moved to Winnipeg, where Bergen enrolled at the University ofWinnipeg and settled on a career as an English teacher. It was about this time Bergen began writing in earnest, though he didn’t publish his first short story until age 31. “I’m either a really late bloomer,” he laughs, “or very slow at figuring things out.”

Among the authors Bergen counts as influences are Richard Ford, Alice Munro and Cormac McCarthy. He also acknowledges cutting his “literary sexual teeth” on John Updike. In a newspaper article Bergen wrote a few years ago about fiction and sex, he notes that, with Updike, “there was a feeling of playfulness along with the sense of falling. Never was sex simple; the forbidden fruit often turned out rotten.” And so it is in Bergen’s fictional world. Affairs and adulteries tend to end badly; sex is more often a source of tension than joy.

Bergen’s parents weren’t impressed with the explicitness of his early fiction, and told him so. It’s a subject Bergen discusses with some discomfort. “I love my parents and have a good relationship with them, but they don’t understand why I write what I write. There’s nothing I can do other than

In the writer’s fictional world, affairs and ac*u*teries tend to end badly, and sex is more often a source of tension than joy

change what I write for their sake, and of course I won’t do that. We’ve just got to the point where we don’t go there. I told them upfront not to read this latest book.” Bergen has also travelled a long way from his upbringing when it comes to matters of faith. While he admires the Mennonite ideal of pacifism, Bergen says, “I have trouble with religion. I don’t believe the answer to peace or getting along with one’s neighbour is God. I fear that’s where the danger is, and what creates our wars.”

A constant challenge for Bergen is finding time to write. With a bustling home life and a full-time job (though he has taken a

leave of absence from teaching this year), he steals whatever moments he can. He often retreats for short periods to various locations—a current favourite is a local cemetery— where he sits in his car and writes in longhand. At night, after giving his youngest son a bedtime back rub, Bergen will often lie down beside him for a 20-minute nap and then rise to do a couple of hours of writing on his home computer. “There’s a certain glee when I finally do get alone in a room,” he says. “Forget inspiration; I just write.”

One of the anomalies about Bergen is the contrast between his domestic life and the grim themes of his fiction. As he sits in his kitchen, having just fed his children and sent them off to school (his wife is a student at the University of Winnipeg), Bergen is asked if he ever considered writing a novel about a happily married father of four. “That would be a pretty boring, wouldn’t it?” he replies. “I do get the sense readers these days want happier stories. It may just be our world, and they may well be right. But I’m hardpressed to come up with one.” Until then, we’ll have to make do with the exquisite gloom of Bergen’s imagination. ful 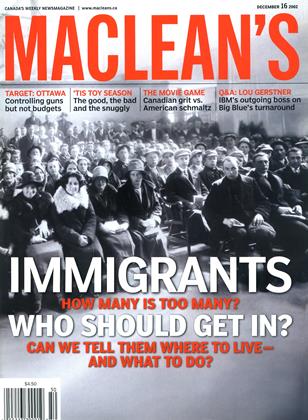