SO THE MAN who made CN’s trains run on time will now try to move corporate jets, Sea-Doos and subway cars faster off the assembly lines. As the Learjet flies, Paul Tellier will move just a few hundred metres north on Jan. 13; his new office as CEO of Bombardier Inc. is located half a block away from the one he is using now at Canadian National Railway Co.’s headquarters in downtown Montreal. But as corporate destinies go, Tellier’s move is infinitely more dramatic. He is jumping from a company that was no better than dead a decade ago but is soaring now, to settle in the cockpit of an industrial conglomerate that has long been a darling of investors, but now seems to be in a tailspin.

The announcement last Friday that Robert Brown had stepped down as president and CEO of Bombardier, to be replaced by Tellier—himself replaced by chief operating officer Hunter Harrison at the helm of CN— jolted the corporate world and brought joy to investors, who pushed Bombardier’s beleaguered stock up eight per cent. CN fell by two per cent.

“The announcement came more as a surprise than a shock,” says Cameron Doerksen, an analyst with the Dlouhy Merchant Group in Montreal. Bombardier’s stock—which traded for as much as $24 a little more than ayear ago—closed at $5.50 Friday. “The status quo,” Tellier told analysts and reporters, “is not acceptable to the shareholders. Bombardier needs to be re-energized.” “Shareholders” was code for the powerful Bombardier clan, the heirs of founder J. Armand Bombardier, who still control the company and have seen their collective wealth melt by a whopping $2.3 billion in the last year.

Bombardier is the world’s largest train manufacturer, and a leading maker of recreational vehicles, but its cash cow was its leading position in regional jets and corporate

planes, a segment that is ailing now. “The fundamental issue behind Bombardier is what is going to happen in the airline industry, and end markets will be out of Tellier’s hands just as they were out of Robert Brown’s hands,” says Doerken, who has set a target of $8.40 for Bombardier’s stock.

Karl Moore, a McGill University business professor who is close to Bombardier’s management, said he’d heard rumbles of dissatisfaction over Brown’s leadership in recent weeks. “The results were just not there, so it’s normal you would hear grumbling.”

When Tellier took over CN in 1992, the state-owned railway was overstaffed, inefficient, mismanaged. He turned it into a lean and hungry organization, bent on making acquisitions in the U.S. and becoming a leading rail transporter on the continent. But Bombardier is already leaner, having laid off 2,000 workers in September.

Bombardier has different problems. It be-

When he took over CN in 1992, the railway was overstaffed, inefficient, mismanaged. He made it lean and hungry.

came the world’s biggest train manufacturer by buying Germany’s Adtranz for $1.1 billion two years ago. Bombardier is now suing seller DaimlerChrysler AG for $1.4 billion, citing hidden costs and difficulties. The glitch-plagued introduction of the Acela high-speed train between Boston and Washington has triggered bad blood and massive lawsuits with Amtrak. Since the 9/11 terror attacks, Bombardier has written off a total of $915 billion from its books, and has its hands full fighting Embraer, its upstart Brazilian competitor in the regional jet niche, while the bottom seems to have fallen out of the lucrative corporate jet business.

“Bombardier is a world-class company with a tremendous track record,” Tellier said. And tremendous assets, among them a $45-billion backlog of orders for its various divisions. But the stock’s recent plunge had puzzled company insiders, if not analysts. Tellier promised to dig at the root of the perception that Bombardier is not performing as well as it should.

His reputation as the manager who slashed over 10,000 reputedly unassailable unionized jobs at CN triggered shivers among Bombardier’s staff, but no immediate official reaction from their union. Tellier was on Bombardier’s board and is already familiar with the company’s situation. “He is a very good fit, and will have a tremendous impact soon,” McGill’s Moore says. “If he can’t turn things around, you wonder who can.” 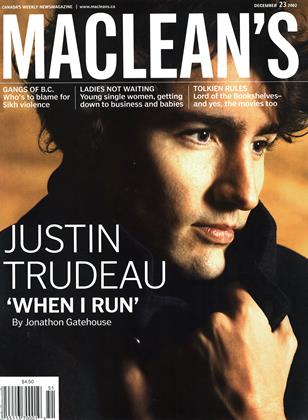