TOO PERFECT TO BE TRUE? Amy Cameron December 9 2002

As always, it boils down to an act of faith, just as it did from the moment a French scholar noticed the inscription on the side of the 1stcentury CE stone ossuary. Faith was required to recognize the implications of the Aramaic phrase “James son of Joseph brother of Jesus;” to overlook the lack of commonly accepted archaeological provenance-a Tel Aviv collector bought it from an antiquities dealer 30 years ago for $200; and to announce that this ossuary might, just might, be the first tangible proof of the existence of Jesus. Hundreds of academics, archaeologists, theologians and even statisticians have become involved in an international frenzy over whose bones had been kept in this box. Could they have belonged to James, the brother of Jesus, the leader of Jerusalem’s emerging Christian community until he was stoned to death in 62 CE?

And does it matter? For Christians, the discovery of the box, currently on display at the Royal Ontario Museum in Toronto, could be additional proof of something they already believe-the historical existence of Jesus. If it really is James’s ossuary, “it is the most significant find in Christian archaeology,” says James

Beverley, professor of theology and ethics at Toronto’s Tyndale Beminary. “It makes Jesus a really present figure in terms of history and not just a shadow figure.” Beverley, also a columnist for Faith Today, adds that the ossuary will help bring the historical Jesus into the limelight. “He is often obscured by the emphasis on faith,” he says. “As if faith shouldn’t have concerns about what actually happened.”

This sort of single-minded focus on Jesus worries Robert Eisenman. Author of the 1,000-page tome, James the Brother of Jesus, he argues that the box is too perfect to be true. (Per-

haps someone has been reading his 1997 bookin it, he suggests that the best proof of Jesus would be to establish his relationship with the well-documented James.) “I never needed an ossuary to prove that James was important,” says Eisenman. “But now we’re going to throw James on the scrap heap of history again. Marginalize him. Treat him as an nonentity and use this to prove Jesus again.”

Rev. William Veenstra, the Canadian ministries director for the Christian Reformed Church in North America, finds the debate fascinating but says it doesn’t matter whom the box once contained. “Certainly we want to know if it is the true thing or not, because the truth is important,” he says. “But it is not going to shake my faith one way or the other.” However, for those whose faith isn’t rock-solid, and for the simply curious, the discovery may mean a renewed interest in early Christianity. Ed Keall, curator of the James exhibit and head of the ROM’s Near Eastern and Asian Civilizations department, is surprised by the attention paid the ossuary and the number of people flocking to see it. But he keeps it in perspective. “The lineup for the Lord of the Rings exhibit was still longer.” Amy Cameron 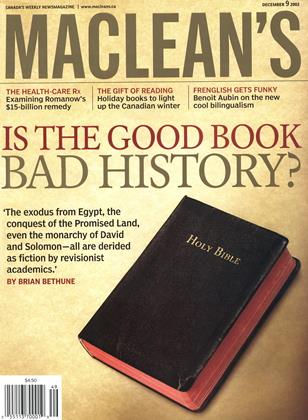