It’s the black-clad motorcycle cop with the submachine gun slung casually across his back who first notices the three young Arabs in the battered beige Fiat. He motions them to pull over; within seconds the car is surrounded by gun-toting soldiers and plainclothes policemen. Snipers stand at the ready on the rooftops above. As homeward-bound commuters watch nervously from the bus stop across the street, the police frisk the young men, scrutinize their identification and search their vehicle before sending them on their way. Trigger fingers are itchy on Jaffa Street, Jerusalem’s main commercial strip.

in Jerusalem and the West Bank

on and around the street over the past six months, the holy city’s usually bustling downtown shopping and entertainment district is largely deserted. Small wonder—a Jan. 30 suicide bombing that left two Israelis injured came just days after another suicide bomber killed an 81year-old man and injured more than 100 people on Jan. 27. Now, the buses and the cars seem to move a little quicker, and the few pedestrians swivel their heads as they speed-walk by. The only people who linger are the watchful security forces and the Palestinian construction workers busy repairing the shattered storefronts. “It’s turned into a triangle of blood,” despairs Judith Zaken, a local merchant. “No money, no work, no business.” Standing in the doorway of her children’s footwear store, surrounded by

shards of glass, fallen plaster and tiny shoe boxes, she expresses doubts that consumers will ever return. “Mothers with babies don’t want to come here,” says Zaken, who lost a son during the Israeli invasion of Lebanon in the early 1980s. “It’s not worth getting killed over a pair of shoes.” Her sister-in-law and partner, Simka, says people are fed up with the horror and bloodshed. “We can’t keep living like this,” she says. “Soon we’ll have to move out and give the keys to Arafat. It’s a street of the dead, a city of the dead.” Sixteen months into the second intifada, the relentless tide of attacks and reprisals continues across the borders of Israel and the Palestinian territories. The prospects for peace seem more risible than remote. Yasser Arafat, the chairman of the Palestinian Authority, remains trapped in his

offices in the Palestinian city of Ramallah, surrounded by Israeli tanks but still full of defiant praise for “the martyrs of Jerusalem.” In an interview with the Maariv daily newspaper last week, Ariel Sharon, the Israeli prime minister, turned the rhetoric up another notch, saying he regrets not assassinating his Palestinian opponent in Beirut 20 years ago when he was defence minister because of an agreement not to kill Arafat. U.S. President George W. Bush’s comments last week that he is “very disappointed” in Arafat’s efforts to clamp down on terror have been seized on by both sides as an indication that American patience with the Palestinian leader is all but exhausted.

Many Israelis are feeling a fatigue of their own, tired of the violence and the evertightening security measures that still can’t stop the attacks. Sales of anti-anxiety drugs have skyrocketed since the intifada began. Sitting in the bright afternoon sun in Zion Square, off Jaffa Street, Idit Fargun, a 22year-old law student, has difficulty putting her feelings into words. It is a numbing combination of depression, sorrow and growing claustrophobia, she finally says.

“You go out and you sit somewhere and you have a drink with your friends, and two or three hours later the place where you were gets bombed,” Fargun explains. “I feel like a circle is tightening around me, like my world is getting smaller and smaller.” Fargun, who was a strong supporter of the Oslo peace process—agreed to by Arafat and then-Israeli prime minister Yitzhak Rabin in 1993—says she feels like her country is regressing. “People had such high expectations,” she says. “Now it’s an exceptional thing to sit here in the street. It shouldn’t be.” Across the square, a frustrated smoke-shop owner bellows at a group of milling soldiers and police: “You

motherf____s keep parking your cars in

front of my shop—everybody thinks something has happened! Nobody will come in and buy anything!”

In the wake of the most recent downtown suicide attack, Sharon has endorsed a police plan to “envelop Jerusalem” and Jewish settlements in the nearby West Bank with a complex network of checkpoints, fences, security cameras and roadblocks. The proposal, which still needs budgetary approval, calls for the construction

of an 11 -km fence through the heart of Jerusalem, dividing the largely Arab eastern part of the city from the Jewish west side. Many Israelis are skeptical of the idea, and local media commentators predict the costly plan will die on the drawing table. Critics point out that Jerusalems patchwork quilt of neighbourhoods would necessitate the establishment of at least 40 new checkpoints and cause traffic chaos.

The Jan. 27 suicide bomber was Wafa Idris, a 28-year-old woman who worked as a paramedic volunteer for the Palestine Red Crescent Society—until she tried to gain entry to paradise by detonating 10 kg of explosives on a crowded street corner. She lived in the Amari Refugee Camp near Ramallah, where residents say the proposed Israeli measures will do nothing to stop the violence. “Suicide bombers will continue to give their souls to Palestine,” says Ahmed, a Palestinian policeman. “Even if they build the highest wall in the world, the bombers will dig a tunnel underneath and go and martyr themselves.” Ahmed, who used to support the peace process, says his views have changed over the past 16 months. “The Israelis kill our

children, they kidnap and assassinate our political leaders, and they still say they want peace,” he says. “Today, if I saw a pregnant Jewish woman, I would kill her and her child, because the kid would be no better than his prime minister.”

A hundred metres down the road, under a billboard advertising Viceroy cigarettes—“The Big Taste of America”— some two dozen young Palestinian boys are engaged in their daily after-school ritual: slinging stones at the Israeli tanks and soldiers surrounding Arafat’s compound. As rocks ping off an armoured bulldozer collecting earth for more blockades, the soldiers fire the occasional rubber bullet into the group. A small boy in a green ski jacket (his friends later say he is 8) bursts into tears, clutching his hand. His companions rush him to a waiting ambulance. Mohammed, a 15year-old with a mouth full of braces and a Palestinian flag draped around his neck like a cape, says the street battles are one of the few fun things to do in Ramallah.

A few streets away in the business dis-

trict, all the shops are closed—on strike in support of the besieged chairman—but the tables at the cafés are crowded with men playing cards, sipping demitasses of coffee and smoking water pipes. Fahed Freeg, an unemployed 27-year-old commerce graduate, says it is the Israelis who have wrecked the peace process. He points

to the seizure of the Karine A, a ship filled with arms allegedly destined for Palestinian fighters, on the Red Sea in early January. Freeg says Mossad—the Israeli secret service—and the Americans are trying to discredit Arafat. “It’s a pure fabrication,” he declares. “When Israel saw that Arafat was arresting Hamas and Hezbollah members, like they asked, they came up with the idea,” says Freeg. “Its because the Israelis don’t want to do what they are supposed to do under the peace agreement.” Thaer Shugquer, his friend, still holds out hope for a political solution. “The Palestinian people are forced towards violence because they are forbidden to earn their food,” says the 31-year-old mechanical engineer. “We need a balanced peace. Jerusalem should be a religious area for all religions. This can’t go on, people are tired of it.” Sipping a beer in the lobby of his Jerusalem hotel, Mark Sokolow also wonders where it will all end. On Sept. 11, the 43year-old lawyer from Woodmere, N.Y., escaped from his offices on the 38th floor of the South Tower of the World Trade Center when the first hijacked plane crashed into the building next door. “After the 11 th we thought about going to Florida —Disneyland—for a vacation, but we thought that would be kind of trivial,” Sokolow says. “So we decided to come show our support for Israel instead.” On Sunday, Jan. 27, he, his wife, Rina, and two of their children, Lauren, 16, and Jamie, 12, were standing on Jaffa Street, about six metres from the suicide bomber. All were injured; at week’s end Rina and Jamie remained in hospital. In the confusion after the attack, Sokolow lost track of his family, and spent several hours in hospital wondering if they had survived. “I don’t know if it’s possible to really have peace here,” he says. The day before, he had shared his harrowing story with Good Morning America. Hillary Clinton saw the show and called to offer her support, he says. Sokolow isn’t angry, at least not as angry as he was about the Sept. 11 attacks in which he lost about a dozen friends. He just wants Americans to understand that what’s happening in Israel affects people just like them. “We should be able to come here, tour around, visit family,” he says. “And not have to worry about going shopping for shoes for our 12-year-old.” ED 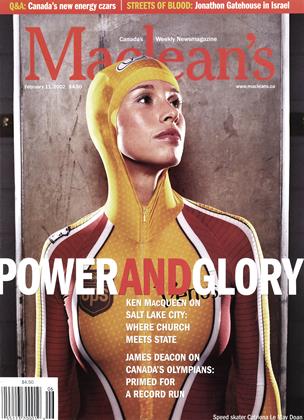