Police descended on a ramshackle, 11-hectare pig farm in Port Coquitlam, about 35 km east of Vancouver, searching for clues to the disappearances of some 50 women since 1983. Most of them were drug-addicted prostitutes in the Lower Mainland. There has long been speculation that a serial killer was preying on

prostitutes working Vancouver’s seedy Downtown Eastside. But the RCMP refused to say what led them to Robert and David Pickton’s farm, where a sign on the gate warns: “This Property Protected by a Pit Bull with AIDS.” Spokesmen also said that the Picktons, who have become wealthy by selling off pieces of their land to developers,

were not suspects, although they did charge the elder brother, Robert, 52, with three firearms offences. His brother David had disappeared.

At week’s end, there was a massive police presence at the property as authorities set up fences, special lights and outhouses. Meanwhile, a large

crowd of onlookers, Including members of the victims’ families, also gathered at the scene. One woman whose friend, Elaine Dumba, disappeared in 1989, told reporters she fears the worst. “I’m not really into hearing that she’s maybe under one of those mounds,” she said, looking at the large gravel hills on the property.

that would pay them almost $100,000; last week, in the Dally Mall, one student at a school where Gehring had taught claimed to have gone to bed with her in her apartment in September, 2000, when he had just turned 16. Gehring herself hired a literary agent and, according to her lawyer, Andrew Thompson, was considering offers to tell her side of the story. “She’d

be mad not to consider her options,” Thompson said, although he added that no decision on a deal had yet been reached.

More than $2 billion slated for infrastructure megaprojects will be controlled directly by politicians and not by an independent agency. The decision, tabled in the House of

Commons, reverses a pledge made by Finance Minister Paul Martin in his post-Sept. 11 mini-budget two months ago, and will put the Strategic Infrastructure Foundation funds under the control of Deputy Prime Minister John Manley. Opposition parties jumped on the flip-flop, accusing the Liberals of reneging on a promise and setting up a partisan slush fund. But Manley defended

the government’s plan, insisting it will ensure politicians are accountable for the way they spend taxpayers’ money.

Edward Dooley, 36, cried quietly in his son’s bedroom as paramedics examined the battered body of seven-year-old Randal-but only after he cooked some hot dogs and had a cigarette, emergency personnel testified. Randal's stepmother, Marcia, 32, told police the “accident-prone” boy tumbled from his top bunk bed the night before he was discovered dead, a detective said. Both are on trial for seconddegree murder; prosecutors say Randal, who was found dead in September, 1998, clad in a diaper and blood-speckled Toronto Maple Leaf pajamas, had suffered brain injuries, 14 broken ribs and a lacerated liver.

The pressure continued to build on Yasser Arafat as George W. Bush insisted the Palestinian leader “do everything in his power to fight terror” against Israel. Ahmed Qureia, the speaker of the Palestinian parliament, received much the same message from Canada’s new foreign minister, Bill Graham, during meetings in Ottawa last week. Graham’s comments came just hours after more violence: Israel struck a Palestinian government complex, injuring 11 people, in retaliation for a Feb. 6 assault on an isolated Jewish settlement that killed three Israelis.

A new study by U.S. researchers has found that artificial tanning beds or sun lamps can increase the odds of getting the two most common kinds of skin cancer. And the chances of developing basal cell carcinoma or squamous cell carcinoma increase even more for those who start artificial tanning at an earlier age.The two skin cancers, although not as lethal as malignant melanoma, can still result in disfigurement, particularly if growths have to be removed. The Canadian Cancer Society estimates 70,000 new cases of basal

cell carcinoma and squamous cell carcinoma were diagnosed in 2001, compared with 21,000 cases of lung cancer and 3,800 of malignant melanoma.

Out of a job

Jocelyne Moreau-Bérubé, a former New Brunswick Provincial Court judge, lost her fight to keep her job. In 1998, the New Brunswick Judicial Council removed her from her $125,000-a-year post after she referred to Acadians as, for the most part, “crooks.”The Supreme Court of Canada last week upheld the decision against Moreau-Bérubé, herself of Acadian background.

The Supreme Court refused to hear the CBC’s appeal of a libel judgment against the investigative TV : show the fifth estate. That decision : leaves the CBC-and taxpayers-on the hook for more than $3 million in damages and legal fees, arising from an episode on the safety of a heart drug in February, 1996, that slandered two Ontario doctors. One of the doctors, Frans Leenen, the director of the Ottawa Heart Institute’s hypertension unit, had initially asked for an on-air apology and $10,000, but the CBC refused.

Air Canada’s near-monopoly was no help to its balance sheet in 2001. The flag carrier lost a record $1.25 billion for the year, thanks to a weak economy compounded by the postSept. 11 travel slump. “The best thing I can say about 2001 is that it’s over,” said CEO Robert Milton.

But he predicted the company would return to profit this year and recall almost all of the planes grounded in the wake of the terror attacks in the United States. He also said prospects for growth in the carrier’s new no-frills airline, Tango, are “limitless.”

A currency trader for a U.S. subsidiary of Ireland’s biggest bank was suspended as officials accused him of hiding US$750 million in losses. Lawyers for 37-year-old John Rusnak, who works for Allfirst Financial, a unit of Allied Irish Banks PLC in Baltimore, Md., said he was co-operating with investigators. The bank accused him of creating fraudulent options and concealing the losses with fictitious transactions. Analysts said the bank’s internal controls were clearly wanting: Rusnak’s trading limit was US$2.5 million. No charges had been filed last week.

A tearful Fabienne Brin put her arms around her six-year-old daughter, Sara, for the first time in three years and said, “I love you.” The search that had taken Brin, from Nantes, France, to North America had finally come to a happy conclusion at Halifax International Airport. Their reunion came a day after police outside Truro, N.S., stopped the girl’s father, Marc Habib Eghbal, for a seat-belt violation and found he was wanted for abduction and violating the Immigration Act by entering Canada under an assumed name. Eghbal, 37, an Iranian with French citizenship, disappeared three years ago with Sara and now faces extradition to France. At week’s end, Brin and

Sara left for Nantes, where they will rejoin Brin’s other daughter, who was nine months old when Sara disappeared. “She asked me lots of things about her sister,” # said Brin. “So I am very happy.”

The health system ‘needs remodelling’ but ‘not demolishing’

Even by the modest expectations of these matters, Roy Romanow’s interim report on Canada’s health care system underwhelmed many last week. The former Saskatchewan NDP premier wants the 70-page document, the product of nine months’ work, to serve as a template for his planned public hearings on the system’s problems and possible cures. And he intended to reveal enough clear thinking on the murky and controversial subject to persuade the provinces-many of which are formulating their own diagnoses and want to move swiftly

to the treatment phase-to hold off on their freelancing until he hands down his conclusions in November.

But it was soon apparent some have no intention of waiting. “We are moving forward now,” said B.C. Health Planning Minister Sindi Hawkins. Similar discouraging words emanated from Edmonton and Toronto. But Romanow contends the system is not in crisis. Medicare, he said, “needs remodelling” but “not demolishing.”

In trying to focus the public hearings scheduled for the next few months, Romanow laid out four

avenues for discussion: more cash from government; user fees and other private funding; more private services to take pressure off public providers; and more efficient use of the $95 billion a year now spent on health. Or cherry-picking from all of the above. Finally, he suggested he was open to expanding the system to include pharmacare, noting more money is spent on drugs in Canada than on physicians.

If Romanow didn’t tip his hand about the options he’s most likely to settle on, he did signal what he’s against. “Canadians do not want

a 10-tier, patchwork-quilt healthcare system,” he told a news conference. And he studiously avoided taking sides in the current federal-provincial squabble over which level of government is most responsible for the medicare mess, saying that regardless who’s right, the money comes from one source-the public. Canadians, he said, want governments to “stop the corrosive and unproductive long-distance hollering and fingerpointing that currently passes for debate on how to renew the healthcare system.”

The words were reminiscent of congressional investigations of Mafia dons: “On the advice of my counsel I respectfully decline to answer the question based on the protection afforded me under the constitution of the United States.” So saying, four executives of collapsed energy giant Enron Corp. took the Fifth Amendment and avoided questioning about the issue at the centre of

the corporate scandal: the offbooks investment partnerships that inflated Enron’s balance sheet and covered up its losses. Among those refusing was former chief financial officer Andrew Fastow, who created the partnerships and made US$30 million from them.

But the top-ranking exec who did testify, ex-

CEO Jeffrey Skilling (below), failed to shed much light on what happened. He repeatedly said he could not recall meetings where othersand even the meeting minutes-said he had approved or defended Fastow’s deals. Two executives also said they warned Skilling directly of problems, but he insisted he was

unaware of improprieties. Enron was in good shape when he left In August, he maintained: “I wasn’t there when it came unstuck.” His interviewers at a House subcommittee were harshly skeptical. Invoking the old Hogan’s Hemes TV sitcom, Democrat Edward Markey of Massachusetts told Skilling: “You are employing the Sergeant Schultz defence of‘I see nothing. I hear nothing.’” 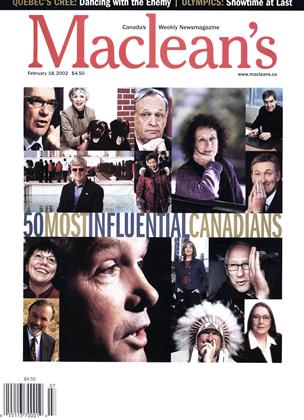