Looking for backroom dealings as unsavoury as those in international figure skating? Examples of ego trumping ethics that would smell familiar to a former Enron executive? Self-interest cloaked in self-righteousness that bears more than a passing resemblance to the pose Michael Cowpland has struck in the face of insidertrading charges? For elements of all of the above, try the federal Liberals’ leadership scrap. And if the row between Finance Minister Paul Martin and Industry Minister Allan Rock that broke into the open last week wasn’t quite that bad, bear in mind that the official race to replace Jean Chrétien may still be many months or even years away. Plenty of time to escalate the acrimony.

To an outsider, the details of the dispute hardly seem worth raising one’s voice over, let alone razing the Liberal party’s vaunted reputation for internal discipline. The public clash of shoguns started out as an arcane

insider squabble over how easily Liberal organizers should be able to get their hands on blank party membership forms. Should they be handed out one at a time or in batches of five? Should the organizers be required to supply the names of the prospective members in advance? Such fine points have always been worked out quiedy by the party’s provincial wings. But in play this time are the rules for Ontario—the biggest batdeground and, as Rock’s home turf, the industry minister’s best bet to close the gap between his come-from-behind bid and Martin’s front-running machine.

In other words, the choosing of the next prime minister may be at stake. For Martin, who enjoys the support of a big swath of Ontario MPs and their constituency associations, there is obvious advantage to making it harder for Rock to sign up new members and turn today’s pro-Martin ridings into tomorrow’s Rock bastions. When Martin’s operatives succeeded in passing new rules to do just that, Rock accused him of turning the party

into a “country club for elites.” Even more incendiary was the charge flung by Warren Kinsella—a Rock supporter who lovingly cultivates a reputation for playing hardball—that the new restrictions smacked of “racial profiling” to keep out potential new members from immigrant communities. Martin was incensed. Fie fired back that Rock’s camp was engaging in “the very worst kind of politics.”

There was a sort of superficial symmetry in the unprecedented outbursts. One cabinet heavyweight against another. Rock’s enforcer Kinsella lined up against a nononsense Martin lieutenant named Karl Littler. But the two sides were really taking very different approaches. In his angry yet carefully worded statement attacking Rock, Martin was remarkably candid in admitting that his team wanted the rule changes for campaign reasons. Mad as he was about being labelled elitist and even racist, he didn’t try to deny the evident truth that his guys were acting strategically. Rock, by contrast, insists that his zeal for

easy access to blank forms runs deeper than the exigencies of ambition. “It’s a question of principle,” he told Macleans.

That puts the standard Rock has to meet to avoid looking like he’s indulging in hyperbole—if not hypocrisy—much higher. So is there anything in what Martin’s wheelers and dealers have wrought that justifies such umbrage? Back in October, they passed a controversial rule in Ontario that limited access to membership forms. (The rules vary widely from province to province.) The Ontario headquarters in Toronto would hand out only one form at a time to individuals who asked to join, along with extra forms for immediate family members only. Leadership campaign organizers looking for multiple blank forms would have to go to local riding executives, who use their own discretion about how many to distribute and to whom. Since many of those constituency officials are Martin backers, Rock’s organizers cried foul, fearing their supply of the precious paper that fuels recruitment drives would dry up.

A compromise was worked out in early February by the national Liberal executive. New guidelines promoted by Chrétiens loyalists urged the party’s provincial wings to pass out forms five at a time. But Martin supporters added a rider clause when that policy was adopted in Ontario: anyone asking for five forms would have to first

give headquarters the names of the five prospective new members.

For Rock, that was too much to take. He argues that his own political career would never have gotten off the ground if he hadn’t been able to get stacks of blank forms back in 1993, when he was going door to door and holding coffee parties to sign up enough members to win a fiercely contested nomination in his Toronto riding. “It was an opportunity for me to work harder than the next person to convince average people who had never been involved in politics before to sign the form, fill it out, become a member of the party, and then turn out and vote for me at a nomination meeting,” Rock says. “If the current system was in place, I couldn’t have done that.”

That kind of uplifting exercise in grassroots democracy is not what automatically springs to mind when political veterans think of bulk membership sales. Canadian campaign lore is full of stories of “instant” members swarming key riding meetings and outvoting party stalwarts. Tories like to tell the one about Brian Mulroney’s boys signing up homeless men at Montreal’s Old Brewery Mission to defeat Joe Clark’s forces in 1983. Tales of mass sign-ups of ethnic community members abound, often Italians and Greeks in past eras and, more recendy, Sikhs. And then there are single-issue groups with single-minded determination, like anti-abortion activists, who some-

times muster the numbers to take over.

Jack Siegel, co-chairman of the Liberal constitutional and legal affairs committee, agrees sudden influxes of strangers can be demoralizing to long-time party volunteers. But Siegel opposes the Martinbacked membership restrictions, arguing that the way to beat a new wave of recruits is to bus in even more of your own. He has successfully organized such defensive campaigns. “I have an underlying philosophy: the more the merrier,” Siegel says. He has not declared for any candidate to succeed Chrétien, but allows he is “not sympathetic” to Martin. While he stops short of endorsing Kinsella’s imputation of a racial taint to the contentious new Ontario rules, Siegel suspects Martin’s supporters have a related motive for being wary of newcomers to the Liberal fold. “They probably have some polling that says Paul Martin is most attractive to the established, very conservative, monied elements of our party,” he says.

After last week’s heated exchange, both sides were trying to drag the internecine batde off the front pages and back behind closed doors. But the accusations of elitism and worse against Martin and his network will not be forgotten. What was once merely the usual Liberal preoccupation with power is now irrevocably personal. E3 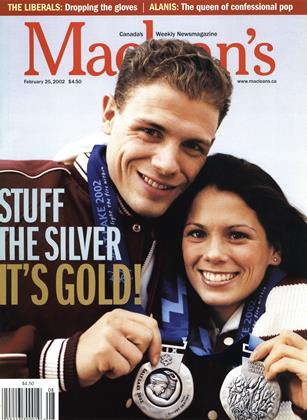