I want to tell you all about Monster’s Ball, a slow-burn slice of Southern Gothic that has left a strange taste in my mouth. But first I should explain how I was deprived of my right to see a minute of steamy sex between Halle Berry and Billy Bob Thornton because I saw a censored version of the movie in the Land of the Free. Right now Fm scrunched over a laptop high above the Nevada desert, on the way back from Los Angeles, where almost anything is possible. The trip was a “media outreach” program for cultural journalists organized by Ottawa’s Foreign Affairs department. Our mission: to look up Canadians who’ve found a niche in the Dream Factory.

We met a lot of animators. Canada has always exported animators. Trained by institutions such as the National Film Board or Sheridan College in Oakville, Ont., they become Hollywood’s hewers of software and drawers of pixels. Some still use pencils, but computers are taking over. We met a dozen Canadian artists who work at the DreamWorks “campus” in Burbank. It’s a studio built like a Mediterranean villa, with streams and gardens and terra cotta tiles. The company provides free meals, and an endless supply of chocolate bars,

so no one ever has to leave the premises.

Walking through the corridors, you feel like you’re in a school overrun by art projects. The walls are covered with images of movies-in-progress—mafioso sharks in an underwater mob story called Shark Slayer ; animals from Central Park who get marooned in the jungles of Madagascar; and a wild horse fighting for its freedom in an Old West adventure called Spirit—narrated by Canadian rock star Bryan Adams.

On the other side of town, in an industrial park, we dropped by SimEx, a Toronto-based animation company with clients ranging from Disney to the makers of Fruit Loops and Frosted Flakes. Creative director Allen Yamashita discussed the problem of assimilating Tony the Tiger, a vintage cartoon character, into the world of computer graphics. Animators had tried to build a 3-D digital model of Tony, but he no longer looked liked himself So they ended up grafting the old 2-D Tony onto a digital landscape. “Tony the Tiger is big business,” explains Yamashita. “You don’t mess with Tony the Tiger.”

Our day ends in a Santa Monica office

overlooking an ocean sunset. There, Kim Davidson, president of Side Effects Software, another Toronto-based firm, pitched the virtues of Houdini Select, a program used to animate special effects in coundess Hollywood movies, ranging from The Matrix to Black Hawk Down. This is the kind of animation you’re not supposed to notice, and it’s changing the face of cinema.

So what does all this have to do with Halle Berry and Billy Bob Thornton? Well, nothing. But affer a day of touring the Dream Factory, I ducked into a Santa Monica multiplex and immersed myself in Monster’s Ball, a grim drama without a lick of animation or special effects. Thornton plays Hank, a racist corrections officer in the Deep South who escorts a black man (Sean Combs) to the electric chair—then quits his job and slides into a relationship with the man’s widow, a boozy waitress named Leticia (Berry). The headlong calamities that throw these two misfits together are the stuff of melodrama. But under the quiet direction of Marc Forster, the story unfolds with perverse restraint, slowly gnawing away at the emotions. There are moments of sly humour, and a glimmer of redemption, but no catharsis. As I walked to my rental car, feeling rattled and fragile, it occured to me that Monster’s Ball could almost be a Canadian movie.

It could also serve as a companion piece to In the Bedroom, another dire little American drama about bereavement and repression. Forster creates the same sense of claustrophobic tension between the I actors—Thornton finds yet i another octave for his low's key charisma, and Berry undercuts her beauty with a reckless edge. As for the infamous sex scene, what I saw was certainly torrid, and convincing. But to avoid an N-17 rating, the film’s producers snipped it by a minute. To find out what’s missing, I’ll have to see Monster’s Ball again in Canada, where it’s being released uncut. Apparently, in an America animated by war, it’s OK to wallow in the computergenerated blood and guts of Black Hawk Down. But there’s still nothing quite so threatening as unadulterated sex. ED 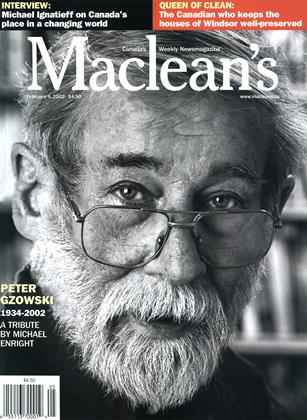