The takeover began quietly. In the beginning, DVD movies occupied only a corner of your local video store. The first players on the market were mostly the domain of rich kids and moviephiles who wanted better quality picture and sound. But as prices fell, the trickle became a flood, and video stores were soon knee deep in shiny discs brimming with extra content like trailers, deleted scenes and “making of” documentaries. Walk into any of Blockbuster Canada Co.’s 367 outlets today and digital video discs have spread across more than a third of the store, putting the squeeze on their Video Home System—VHS, that is—tape rivals. Sad to say, the slow death of the video cassette recorder has begun.

But with VCRs—often several VCRs— in nearly every Canadian household, and boxes of videotapes cluttering basements and closets, it will be a challenge for new formats to topple the old. Nevertheless, as the digital revolution presses forward, nearly every industry it touches is being transformed. And with the emergence of personal video recorders, DVD burners and video-on-demand services, the battle over what to play back on your television will only intensify.

Just as the advent of the compact disc revitalized the music industry, the arrival of DVD players, many of which are compatible with audio CD and MP3 formats, has breathed new life into the home entertainment industry. “It’s bringing people back to the home theatre,” says Robin Powell, senior marketing manager for Sony of Canada Ltd. “We see them spending on advanced audio systems and better quality televisions.” Ironically, he adds, sales for dedicated CD players have declined.

A wider lifestyle trend has helped fuel the growth of technologies for the living room. Even seven months later, the industry points to the Sept. 11 terrorist attacks as the motivation behind people’s “nesting” habits. Survey numbers from early

2002 show people intend to spend more on home entertainment. That can mean anything from a flat screen TV to a Microsoft Xbox gaming system. DVD players, for instance, were among the hottest items this past holiday season. Price was no longer a hurdle—a low-end player now costs as little at $ 180. Sales, as a result, were huge. “It was nuts,” says Lori DeCou, senior manager of corporate communications for Future Shop Ltd., Canada’s largest chain of consumer electronics stores. “It surpassed our wildest expectations.” The company’s 95 outlets sold a combined 100,000 units. Wholesalers’ shipments to retailers in 2001 were 17 times those of 1998, the year players were introduced in Canada. “That makes DVD the fastest-growth category in the history of electronics,” says Powell.

The DVD frenzy has had a ripple effect on rentals. Last September, Dallas-based Blockbuster Inc., parent of the Canadian

chain, announced it would eliminate a quarter of its VHS-format movies to make more room for DVDs. Chuck van der Lee, president and CEO of Rogers Video (owned, like Macleans, by Toronto-based Rogers Communications Inc.), agrees the digital format is growing quickly. “Today, 30 per cent of the rental dollar is going to DVD and 70 per cent to VHS. By the end of2003, we expect it’s going to be a 50-50 proposition.” And come 2006, van der Lee predicts, none of the 263 Rogers outlets across the country will be selling tapes anymore. (Rentals will continue as long as there is demand.)

But the VCR still has one advantage over DVD: the ability to record your favourite programs and movies at an affordable price. Today, VCRs with a decent array of features can be bought for as little as $90 at the grocery store, while a recordable DVD player—still a new technology— will cost you upwards of $2,500. Still, that

advantage won’t last long. Eventually, the cost of any technology drops. And even before that shift takes place, manufacturers like the Netherlands’ Royal Philips Electronics NV have announced they will start shipping DVD players in a space-saving combo with a built-in personal video recorder—a computer hard disk for capturing and playing back television programs. These high-capacity systems— think of them as digital VCRs—promise to revolutionize the way we watch the tube.

While dedicated personal video recorders have been available in the United States for a few years under such brands as TiVo, they were introduced to Canada just last fall by satellite broadcaster Bell Express Vu. Broadcast signals are downloaded from either satellite or cable onto the PVR’s hard disk. Using an onscreen menu and TV guide, viewers can select programs for recording, indexing or playback, all with a few simple clicks of the remote. Thanks to the speed of computer disk access, the technology even allows for instant replays of live TV (you can catch up during the next commercial). No more scanning through piles of VHS tapes to find the latest episode of The West Wingyon hope you recorded earlier in the week.

But it all comes at a price. Bell’s 5100 PVR sells for $699, which includes a builtin satellite receiver and a 40-gigabyte hard drive which can record up to 30 hours of content. “VCRs never fulfilled the promise that people originally bought them for in the Seventies,” says Stuart Morris, marketing vice-president for Bell Express Vu. “They were going to tape shows and watch them later. In an incredibly simple way, the PVR provides that promise.”

Calgary-based Shaw Communications Inc. plans to launch PVR boxes for its 440,000 digital cable subscribers later this year. “I don’t think it’s a killer application because the boxes are not cheap,” says Shaw president Peter Bissonnette. He and other cable barons are more excited about the potential of video on demand. Shaw is developing a service, while Rogers Cable Inc. has launched VOD in central Toronto and will expand its reach this summer.

VOD is another feature opened up by digital technology. Viewers can order movies, and eventually other types of content, with a click of the remote, somewhat like a pay-per-view movie. But unlike payper-view—wh ich starts every half hour or

so, and lasts only for the run of the program—VOD is available for viewing instantly on a single channel dedicated to your household, and “rental” windows can be 24 hours or a weekend. (Nor does this prevent you from hooking up your VCR through the decoder to tape the movie.) As well, VOD works like a VCR—Rogers’ service allows the viewer to stop, play, pause and search forward

able to subscribe to sporting events, children’s programming or a season’s worth of their favourite programs, such as Sex and the City or The Sopranos, and watch archived and new episodes whenever and as often as they like, eliminating the need ever to tape a TV show or movie. “Viewers,” he adds, “are going to get access to a range of different content, very narrow niche content, that never would have seen

and backward. Feature films will begin running about 45 to 60 days after their video store release date, at the same time as pay-per-view. At $4.99, the price for VOD movies will be comparable to rentals (and about a dollar higher than pay-per-view). But there’s also the cost of a digital cable decoder box: $10.95 a month. “Basically, VOD gives greater control, choice and convenience,” argues Mike Lee, vice-president for new product development at Rogers Cable.

Lee points to a day when people will be

the light of day in broadcast because the economics don’t work.” In the U.S., where VOD has been available for the past two years, Hollywood hits account for only about half of viewers’ orders.

The way VOD partisans see it, instead of the 500-channel universe, there’ll be only one channel, in which you choose the content. Clearly, though, there will be many new alternatives as the battle for the family rooms of the nation heats up. So be nice to your VCR—it probably won’t be around much longer. ED 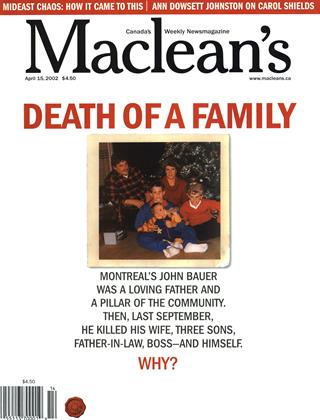