There are two types of weather. One is the type you are trying to flee from. Which is the reason Florida and California are populated in the winter with the Snowbirds. (Florida joke: what’s the difference between Quebec Snowbirds and a canoe? A canoe tips. I digress.)

The other solution is the weather you defy, you confront, you enjoy. That’s the basic philosophy behind the Wickaninnish Inn on the fierce west coast of Vancouver Island, where the winds and the waves come all the way from Japan. Charles McDiarmid, boss of this incredible joint, presides over a luscious inn— soaker tubs, massages, all that junk—that purposely juts out into (not hiding from) the elements and invites the six-metre waves that smash against its windows and the gales that mate with the gallons of wine and the fireplace.

Down below, is one of the longest beaches in the world, 16 km in length, shaming Honolulu’s Waikiki and Sydney’s Bondi—surpassed in beauty only by Amanpulo in the Philippines, where the sand is like icing sugar. At Long Beach, by the Wickaninnish Inn, we used to race our sports cars on the hard-packed sand at midnight under the moon—not actually a

bright idea. Which was proven one night some time later on a high school graduation when a tipsy student was killed. We do not race our sports cars on that beach anymore.

The exclusive resort magazine Andrew Harper’s Hideaway Report has named the 46-room Wickaninnish one of the 30 finest lodges on the globe. One of its slogans: “How’s the weather? Wet and wild.”

One might think Moose Jaw, Sask., would be an awful spot for a travel delight, but it’s developed one of the hottest tourist attractions on the Prairies. For most of the last century, authorities sloughed off rumours about a mysterious network of tunnels running underneath the downtown centre. When a heavy truck collapsed the pavement on Main Street, the secret was out: an underground maze that had been home first to a Chinese ghetto and then AÍ Capone’s gangsters.

When the CPR was built, dollar-a-day Chinese immigrants were welcome. When the “yellow peril” panic hit B.C., Ottawa hiked the “head tax” from $ 100 to $500. By 1921, nearly 200 Chinese labourers, escaping the tax, had made it to Moose Jaw and went underground in tunnels, doing work for above-ground cafés and laundries, while raising children in rat-infested darkness.

Booze changed all that. Saskatchewan ended Prohibition in 1924, nine years before the U.S. did. Moose Jaw, on the Soo Line that ran south to the border, became a bootleg retreat for the Chicago mob. The tunnels were now full of gamblers and prostitutes. The town known as The Buckle on the Wheat Belt became the Sodom and Gomorrah of Saskatchewan. Nancy Gray remembers when her barber father was called to the tunnels to cut Capone’s hair.

Impresario Danny Guillaume has restored the tunnels to their original state for tourist tours, showing the sad conditions of the hidden Chinese and then the gangster haunts. Local actors impersonate some of the characters who survived in the hidden past of a city that pretended not to know. Mystery lurks everywhere.

The mystery Of why every other family in Manitoba has a name ending in “son” is no mystery. In 1875, it seemed the entire population of Iceland was landing in Gimli, 60 km north of Winnipeg on Lake Winnipeg, where they could fish. But they couldn’t get milk and vegetables and many of them died of scurvy; the rest produced the brains that decorate most of the universities in the land. Gimli is a fine place to visit, since Icelanders don’t talk very much.

(how else would his name end?) spent the war in corvettes chasing German subs in the North Atlantic. After the war, the Gimli country doctor drove the gravel roads in -40°C weather and charged $ 1 a house call. He delivered 1,219 babies in eight years. Which is why, when a new school was built, they let the kids name it. Naturally, it became the George Johnson Elementary School, since he had brought into the world almost all of them.

Brains? One of his daughters is a leading Toronto obstetrician and gynecologist. One, married to author Nicholas Shakespeare (a distant relation to Himself), writes and illustrates childrens books. One has an MA in educational psychology. One is a member of the Canadian Senate. One son is founder of the Manitoba Special Olympics. One, ranked No. 3 in Air Canadas frequent flyer files, ran the largest Canadian-owned consulting firm.

Every August long weekend, at Gimli, they have Islendingadagurinn, celebrating those scurvy survivors. All the guys get dressed up like Vikings. It’s a great place. It’s very silent.

What are not silent, as we know, are the Americans. The elephant dominates the mouse, with all their movies, TV, magazines, culture trends. They’ve even invented, as it turns out, one of the finest secret travel retreats in this secretive country. Chester—an hour down the coast from Halifax on the way to Lunenburg. Plush Toronto residents, such as fearsome Tory Sarah Band, find they can get to their Chester summer digs—by Air Canada and a drive—faster than their Rosedale buddies, choked by Friday night highways, can struggle north to their four-hour-away Muskoka cottages.

At the turn of the century, the gentry from Philadelphia and Baltimore, fleeing the summer heat before the advent of air conditioning, escaped to this ocean-cooled retreat with their yachts. And built huge summer homes, 20 and 30 rooms, huge lawns, all like something out of The Great Gatsby, wooden beached whales on the slope over the water. In the area, the nonpareil Globe and Mail columnist George Bain, retired, resides. Barbara McDougall, B. Mulroney’s external affairs minister, is the summertime hostess-with-the-mostes’

in a divinely upgraded farm house. Don Johnston, head of the OECD in Paris, returns each summer for a family retreat and tennis court hubris. It’s the Yanks wot dun it, one of their few gifts.

Most improbable of my Fab Five, as travel surprises, is Yellowknife. A wild tourist attraction, especially now for the Japanese, is the magic of the northern lights. They spend their nights in sleeping bags in the open, dazzled at the spectacle above. The locals, in The Fand of the Midnight Sun, play a golf tournament with a 12 a.m. tee time.

Pope John Paul II, is expected to attract 145,000 pilgrims from 150 nations to World Youth Day in Toronto in July, if he makes it. On his 1984 visit, he was scheduled to have a huge mass in Fort Simpson, N.W.T., his only stop in the Territories. Legend has it that an irate Yellowknife city councillor, citing this as an insult to the major centre—moved that the N.W.T. cancel the visit. Another councillor stood up. “Don’t worry,” he said. “If he kisses the ground when he gets off the plane, he may

be here all winter.” 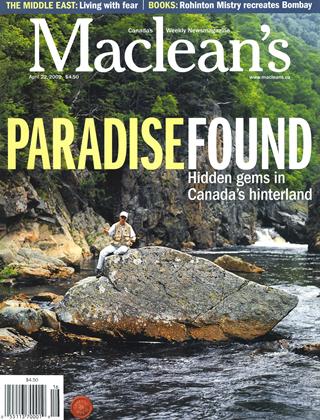