In a small room tucked into the basement of St. Anne’s Parish Hall in Toronto’s west end, David Rotenberg has the spotlight. The 12 students who’ve gathered for his Sunday evening acting class remain totally focused during the five-hour session, as Rotenberg dissects each second of their taped footage with a precision acquired through years of directing, and teaching hundreds of young actors with stars in their eyes. For the dozen students—many recognizable from TV commercials—and for scores of other Canadian actors, Rotenberg is god.

At any given time, Rotenberg—a professor in York University’s graduate theatre program and, at St. Anne’s, teacher (who hand-picks his students) of Equity ShowcaseTheatre’s “acting for the camera” class—is working with about 75 actors, almost all of them Canadian. Hundreds of his St. Anne’s alumni currently work fulltime on projects in Los Angeles, New York City, Toronto and Vancouver. Included in this group are Scott Speedman from Felicity, Polly Shannon, who most recently played Margaret in the CBC miniseries Trudeau; and Demore Barnes from The Associates. Many actors travel back to Toronto for Rotenbergs advice, while oth-

ers have become phone regulars. “When these guys get to Los Angeles they forget that they’re in a different time zone,” laughs Rotenberg, who also works as an acting coach. “My wife sometimes gets annoyed that I’ve given out our home number when the phone rings at one in the morning.” Rotenberg teaches with a unique approach. During class, he quietly observes as his students videotape themselves performing short scenes in pairs or on their own. The group then gathers around a TV to watch the tape, and Rotenberg steps in. While it’s at times painful for students to hear, he offers blunt but constructive criticism of their scene. “I’m not interested in training waiters,” says Rotenberg. “Occasionally I hear back that I’m mean, and it just makes me laugh because I’ve seen acting teachers who would make me look like a puppy dog. One thing that does bother me is someone who has the physical and emotional gifts but is frightened.” Rotenberg protects his students’ fragile egos with his humour—and his acuity as a teacher. “People need to face certain realities about their skills, and David is great at making us see our strengths and weaknesses,” says Shannon, 28, who’s been working with Rotenberg for six years and often travels home from Los Angeles to take his classes. “People were compli-

menting me for some of the choices I made playing Margaret, and I just said, ‘Thank David’. He’s pretty much taught me everything I know about acting.”

Rotenberg, 52, started out as a director. After earning a masters in directing from Yale in 1976, the Toronto native ran two theatre companies, stewarding a slew of plays—including the mid-1980s Broadway show The News. In 1987, Rotenberg, who also writes novels, moved back to his hometown from New Orleans—he was on the faculty of Tulane University—after accepting a teaching job at York. But he says some of his most fulfilling work comes when he escapes twice a week to his acting studio in the room next to St. Anne’s soup kitchen. “Sometimes I’m just amazed when I realize that it’s 11 o’clock and I’ve barely shut up for five hours and yet I’m not tired.”

He is currently doing pre-production work for his screenplay Ambitions Debt, which he plans to direct early next year using only Canadian talent to fill the credits. “I have some really good guys who are willing to do it at a reasonable price,” he says. “The big problem is finding time to shoot around their schedules, and of course getting the financing together.”

Even after 15 years Rotenberg still gets butterflies before teaching at St. Anne’s. “I still get nervous going into class because I realize that I’m taking their money and I owe them a lot.” The payoff for some of David Rotenbergs students can be big, though: an ability to write their own ticket to show biz success. 03 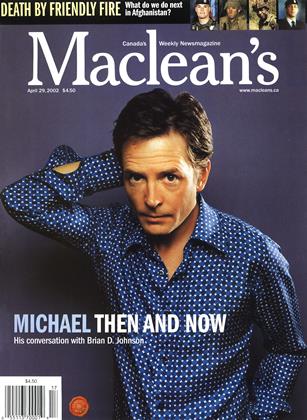