An athlete’s test of courage

The winners were feeling expansive at the 2001 Canadian Sport Awards last week in Toronto. After the CBC-televised event concluded, the female-athlete-of-the-year, speed skater Catriona Le May Doan, talked about an athlete’s responsibility to do good works in the community. And AI Morrow, the head of the women’s rowing team who earned the award for coaching excellence, stressed the Importance of providing moral leadership through sport. So it was fitting that Ashley Cowan, a 16-year-old fromToronto, was the star of the show.

Cowan, who last September swam across Lake Erie, captured the final piece of crystal on the night-the Spirit of Sport Story of the Year. It’s a first-ever CSA prize to celebrate an athlete who did more than simply win a race. The other nominees were Daniel Igali, the Olympic champion wrestler who has raised money to build a school in the rural Nigerian village where he grew up (he distributed leaflets about the project during the black-tie affair) and Jeff Liberty, a national team diver who jumped into the Bow River in Calgary last November to save a pregnant woman whose car had crashed into the river.

Cowan’s story is also more than just about an athletic feat. When she was just 18 months old, her limbs were amputated below the elbows and knees after she survived a near-fatal bout of meningitis. Her condition was initially diagnosed as a fever, but her mother, Shurlene, sought a second, and then a third opinion. Cowan was sent by ambulance to Toronto’s Hospital for Sick Children and, on the way, her heart stopped for 15 minutes. By the time she was resuscitated by paramedics, gangrene had set into her limbs.

Her disability has not stopped her.

Cowan competed as a figure skater until, at age 8, she watched news coverage of distance swimmer Vicki Keith crossing the Great Lakes. T told my mother, That’s what I’m going to do,’ and she was like, ‘Yeah, right,’ ” Cowan says. “But I told her I’d prove her wrong." It was a bold prediction, given that Cowan couldn’t even float at the time. “When she came to me, she couldn’t swim half the length of the pool,” says Keith, who has been her coach since 1994. “And yet there she was, saying she wanted to swim across the lake.” By December, 2000, Keith “saw something in herthattold me she could do it.” And Cowan did, dipping into Lake Erie at Sturgeon Point, N.Y., on Sept. 7. With Keith paddling beside her in a kayak, Cowan emerged 20 km to the north at Crystal Beach, Ont., after battling currents and choppy water for 14 hours and 20 minutes.

The story doesn’t end there. Cowan

launched her swim in an effort to raise money for Variety Village, a fitness facility designed for the disabled. Initially, her story didn’t get widespread attention. And money has been slow to filter in-only about $2,000 so far. But that total should grow. Last week’s Spirit of Sport award will help raise awareness of her efforts, as will subsequent interviews on several U.S.TV shows, including Larry King Live.

Though unused to the spotlight, Cowan showed great composure when she won-even if she didn’t feel it. “I wasn’t calm at all,” she insists. “I was shaking when I got on stage, and I made the mistake of looking at my mom. She was bawling her eyes out.” Still, Cowan kept it together, and that talent, combined with her growing fame, may help her in her long-range ambition. “I love music,” says the Grade 10 student, “and I want to be a singer.” Don’t bet against her.

To wit, to woo

At least we’re laughing at ourselves. The second annual April Fool’s Day poll conducted by The Comedy Network/1psosReid, found that 26 per cent of Canadians think Canada is the funniest country in the world, well ahead of Australia (15 per cent) and the U.S. (14 percent). The majority of Canadians (71 per cent) also feel that our humour is more sophisticated than that of our neighbours to the south. Residents of Newfoundland and Labrador are most likely to make us howl, while Canadians feel that Prince Edward Islanders suffer the most from a lack of a funny bone. Eight out of 10 people polled think a sense of humour is more important than looks-but half would still prefer to be attractive rather than funny. As well, two-thirds of Canadians think men are funnier than women. Now that’s hysterical.

Ezra Levant: Declares he can’t step aside in Calgary Southwest for Stephen Harper

on principle, then does it anyway. Maybe he does belong in Ottawa.

4fe-Colm Feore: Underutilized by Hollywood in Pearl Harbor, Canadian actor dazzles as CBC’s Trudeau. How far can he go? Just watch him. 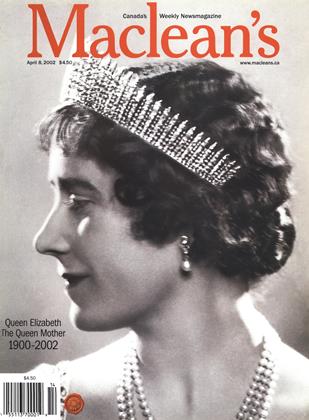