I’m writing today to say thanks for everything you guys have done for us. Due to your ardent efforts, being a pirate like me has never been so good. There was a stretch there, after you successfully shut down the Napster site, when I worried that what we prefer to call peer-to-peer file trading had suffered a serious hit. But there’s a treasure trove out there, and it’s not just music anymore.

The host of P2P programs that replaced Napster makes finding and trading any type of file a snap. Even casual pirates can now download movies that have just hit theatres or watch decrypted DVDs that are of astonishingly good quality. Audio books by best-selling authors line the cyber shelves, and computer and console games that cost $80 in stores—not to mention

programs like Microsoft Office that cost much more—are all accessible with a search term and a little patience.

But it isn’t the what so much as the how that you should be concerned with now. As you know, all anyone needs is a moderately well-equipped computer, a CD burner and an Internet connection (highspeed preferred, as 2.4 million Canadians can attest). “Ripping” files from discs into compressed Internet formats, like MP3 for audio—or from disc to disc—has never been easier. But making matters worse for you content guys are the companies that are cashing in on the file-swapping craze. High-speed Internet purveyors advertise how fast you can download stuff. Makers like Dell and Apple are marketing products specifically for digital media. Heck, some even give away CD burners for free.

See, now there’s your biggest problem. Piracy is going mainstream. It isn’t just pimply teens or T-shirt-stained techies. Curious people of all ilks and ages are giving it a try, or letting their kids give it a try.

What’s more, even companies you guys consider on your side, giants like Sony that produce music and movies, are cashing in. A Net surfer can use a Sony computer to illicitly download a song by Sony artist Bruce Springsteen, burn it onto a Sony blank disc with a Sony CD writer and then play it on a portable Sony MP3 player or even in a Sony MP3-playing car stereo. It seems a little ironic that Sony was one of the music companies that sued Napster claiming it “knowingly encourages and assists the infringement of plaintiffs’ copyrights.” And Bill Gates, who sees himself as chief of the anti-piracy police, has unleashed upon the world Windows XP, the handiest PC system yet for working with digital entertainment.

For me, well, I’m starting to get bored with it all and prefer spending more time woodworking in the garage. But my two-year-old niece, now—that’s who you should be worrying about. Her eyes light up like a hard-working CD-ROM drive when she passes uncle’s “pooter.” The trick is to change things before she learns to type—and raises the skull and cross bones. Eu] 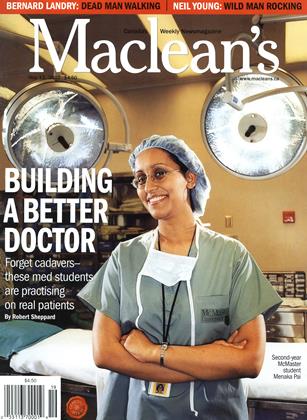