Barbara Stymiest has always been ambitious. At 30, she was the youngest partner with the accounting firm Ernst & Young. Five years later, in 1993, she was the first woman to represent an investment firm on the board of the Toronto Stock Exchange, and then, while

still chief financial officer at Nesbitt Burns, the first to serve as the board’s non-executive chair. In 1999, she took over as CEO—the first female in the job at any North American bourse—at arguably the exchange’s lowest ebb ever. Now, with some important successes under her belt —most significantly, an initial public offering in the works—Stymiest, 43, has raised

the bar again. It’s a little preposterous, but in the face of intense competition from the largest U.S. exchanges, Stymiest wants to challenge them. Not simply in her home territory in Canada, but south of the border, on their own turf. “Were not limiting ourselves,” she says. “We want to be a Canadian-based success story.”

That’s what international companies like Bombardier Inc. and, in the good times, Nortel Networks Corp., are called: Canadian success stories. The Toronto stock market, which recently dropped the TSE tag in favour of a revamped TSX Group, already has clients in the U.S.,

1852 A group of Toronto businessmen meets to form an “Association of Brokers.” No official records remain of transactions.

moves to Bay Street, and a moniker is born.

1914 The outbreak of the First World War causes the TSE to close for three months.

1929 As the ’20s roar, the number of shares traded has grown tenfold in five years-until the Oct. 29 crash ushers in the Great Depression.

1934 The TSE merges with its key competitor, the Standard Stock and Mining Exchange, and becomes North America’s third-largest, after the New York and American exchanges.

Stymiest argues. U.S. investors trade on the exchange, and listings are not restricted to Canadian companies. Sony Corp. of Japan, British Airways pic, and the Michigan mother ship of General Motors Corp. are among the weightier names of the TSX’s 40-odd foreign listed companies. “We’re bigger than Canada,” Stymiest says. “That’s one reason we didn’t put Canada in our new name.”

The exchange, a 140-year-old institution that once was the icon of capitalism in Canada, is undergoing a massive, longneeded overhaul. The IPO, a sale of shares that will result in the exchange listing it-

self, will be the culminating step of that process. For more than a century, the stock exchange was a sort of club, run like a utility and owned by the broker-dealers who used it. Toronto had a near monopoly on the best stocks in Canada—the Montreal Exchange also traded equities, but in recent history Toronto’s bourse was by far the busiest. As it turns out, the exchange was also something of a cash cow. In 2000, it made $80 million on revenues of $235 million—a margin of 34 per cent.

But with the advent of a faster-paced, Internet-dominated, global world of business, the institution had become out-

moded. Its ownership structure—a mutual arrangement among the brokers—was cumbersome. Competition—from the Big Board of the New York Stock Exchange, from Nasdaq, especially for tech stocks, and from small, niche-playing electronic systems—was suddenly a daunting factor. Its technology was of dinosaur vintage— a true humiliation given that Toronto had been a pioneer among the world’s exchanges in 1977 when it introduced electronic trading. In 1997, the exchange completely replaced its trading floor with a computerized system, but pardy because it patched different programs together, partly

1983 Farewell, Bay Street. The exchange moves to much larger digs in First Canadian Place, around the corner on King.

1996 No more eighths: the exchange is the first in North America to introduce decimal trading.

1997 The trading floor closes; brokers use computers in their own offices. There they can watch the dramatic plunge of bogus gold stock Bre-X before it’s delisted.

2001 The TSE takes over CDNX, the Calgarybased Canadian Venture Exchange. Only the fledgling Nasdaq Canada market in Montreal remains as a possible future competitor.

The TSE becomes the TSX and gears up to list itself.

because electronic trading is hugely complex, and partly because trading volumes spiked so dramatically in 1999 and 2000, the set-up was glitch-prone and crashed far too frequently. By the end of the century, the exchange had traded its iconic status for that of a fusty old throwback.

That’s when Stymiest took over. Her style is low-key and she’s understated, in dress and in manner of speaking. But she’s smart, and those ambitions are sky-high. “I’m a glass-half-full sort of person,” Stymiest says—and she is, sometimes cloyingly so, but it helps in the face of a challenge. In 1992, she did battle with Toronto’s Donalda Club, which reserved the early-morning weekend golf tee-off times for men. Stymiest argued that women, like men, now work during the week, and are no longer leisurely weekday golfers. She won. At the exchange, it was a similar old-boys network that needed to be brought up to date. She’s doing that, too. Building on work begun while she was still a board member, she’s shepherded the exchange through a transformation of its ownership structure into a for-profit entity. It has also retooled its technology. Now, one of the biggest jobs is to change the mindset inside the exchange from the old-school, utility-style culture. There’s an irony here, that the exchange, the country’s capitalist centre for a century and a half, is only now adopting a moneymaking model.

Richard Nesbitt, a big man who carries a proportionate heft in the industry, is one who can appreciate that irony. He’s got a sense of humour. As president of TSX Markets, he’s one of the first of the exchange’s front-line execs to come from the group it serves. His most recent venture was an entrepreneurial effort: with two partners he launched BayStreetDirect, an Internet company formed to sell IPOs via the Web. Before that, he was president of the Canadian investment banking division of London-based HSBC Holdings pic, one of the world’s largest banks. Hired by Stymiest last September to run the exchange’s stock trading and data business, Nesbitt says his real job is to instill a “culture to compete.”

He’s doing that by bringing in things customers—investors, brokers and listed companies—have asked for. He’s dropped the fees on trading—three times, so they are

now 40 per cent lower than a year ago. On May 1, the new Standard and Poors TSX composite index replaces the 25-year-old TSE 300. The new index employs a set of rules for including companies, with no limit on number. Nesbitt has also added a new trading program, known as a “call market,” that allows big institutional investors, such as the powerful pension funds, to buy or sell without tipping their hand to the marketplace. “The TSX has not had a new product in the markets in literally decades—this is the first time,” he says of the call market.

Nesbitt has further plans. He’s making headway in opening up trading on the exchange to U.S. investors. One small step, approved in the U.S. in April, permits

Americans to trade stocks listed on the Canadian exchange. The ultimate goal is to have TSX trading terminals on U.S. brokers’ desks-—although this would require the co-operation of American regulators, if it ever happens. Nesbitt is considering allowing trades in U.S. dollars, and is looking at a separate electronic marketplace for fixed income products, such as bonds. The brokerage business is all about taking risks —and that means sometimes making mistakes, Nesbitt says. That attitude is taking hold at the exchange, he says. “Now, it’s OK to make a mistake.”

Stymiest also set out to shake up the image of the exchange and re-brand it. Last August, the TSE took over Canadas junior equities market, CDNX. Pulling this venture exchange under the TSE umbrella required a new design. Plus, as it shed its old style of operating, Toronto needed to break away from its creaky reputation. Enter Robert Pattillo, a long-time communications expert who was responsible for the make-over of Sun Life Financial Services of Canada Inc. and the restyling of the CBC’s logo. An outside design firm, upand-coming Crescent Corp. of Toronto,

was hired and high-powered focus groups were convened.

The exchange needed to become more innovative, more of a leader, more aggressive, participants said. “The overwhelming thing was that everybody wants the exchange to succeed,” Pattillo says. “Canadians believe in Canadian capital markets.” Hence, a new logo, in a bold red colour and sporting a swoosh that cuts through the X of TSX. “We were anxious to create the dynamism that people were looking for,” Pattillo says. “This reflects the aggressive ambitions that we’ve got for the future.” Dropping the ‘E’ in favour of ‘X’ was done for both practical and aesthetic reasons. Internationally, TSE stands for the Tokyo Stock Exchange (still four times bigger than Toronto). Plus, says Pattillo, “the X was greeted with enthusiasm because it tended to promise more.”

Some players, though, want more than promise. Peter Brown, CEO ofVancouverbased Canaccord Capital Corp., Canada’s largest independent brokerage, says the exchange is losing ground. The largest Canadian stocks are now also trading on either the NYSE or Nasdaq, and many mid-sized companies, especially in the tech sector, are opting to bypass the Canadian markets altogether. “There’s a liquidity crisis in the TSE,” Brown says. This bodes badly for the exchange as a listed company, he says, because investors will put their money into the exchange only if they think its volumes will increase and generate more revenue. “If the background is you’re losing the top and not getting the new ones—if you’re getting hollowed out—then you’re not a very good call on volume. So, why would anybody buy your stock?”

It’s true that the largest Canadian companies trade in the U.S.—and the larger they are, the greater the volume of trading south of the border. Toronto-based Thomson Corp., the $11 billion data company controlled by the Thomson family, is expected to list soon in New York. But Stymiest remains unfazed. The problem is not Canadian companies listing on U.S. exchanges, she says. The real fight is over trading of those interlisted stocks. Given the TSX’s new look and products, her optimism is unabated: “We run a far better exchange, I might say, than our friends south of the border.” As usual, she’s just a tad ambitious. 03

Some think the TSX will still lose volume. ‘So, why would anyone buy your stock?’ 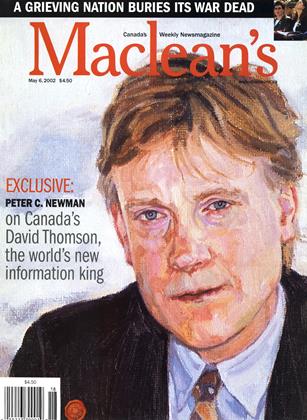