It’s big. It’s cumbersome. And even though Canadians spend more than $100 billion a year on the health-care system, many say it’s underfunded. “Medicare is like a big horn of plenty that is nearly sucked dry,” says Ottawa GP Eoghan O’Shea. He’s run off his feet treating serious illnesses—chronic pain, hepatitis C, drug addiction, complications of diabetes and severe psychiatric problems—because specialists aren’t available. “We are flying by the seat of our pants,” says O’Shea as he wonders where all that money goes. The Canadian Institute for Health Information calculates health-care spending in 2001 at $3,298 per person. Only three countries—the United States,

Germany and Switzerland—among the 30 in the OECD spend more on health care as a proportion of GDP “What are we getting for it?” asks O’Shea. “Someone needs to call the government’s bluff and say these services aren’t there.”

Just a few years ago, that might have sounded like high treason. Now, Canadians are so certain their health system is eroding they are willing to consider solutions that would have been unthinkable

A MINOR TUNE-UP WONT DO IT

Percentage who say fixing the health system will take major repairs or a complete rebuilding:

during medicare’s glory days. The fifth annual Health Care in Canada survey explores attitudes among 1,200 members of the public and 800 health professionals across the country. Asked what they think of allowing Canadians to pay to receive faster services from private clinics, almost half of the general public—47 per cent— reject the notion. But die-hard supporters of medicare may find it surprising that just as many—49 per cent—favour that twotier approach.

It’s all grist for ex-Saskatchewan premier Roy Romanow, whose Commission on the Future of Health Care in Canada will advise Ottawa on means to make the public health-care system sustainable. On the plus side, just over half of poll respondents think Canadians are still getting quality care—but six in 10 expect it to worsen over the next five years. Their main concerns: access to care, lack of funding and shortages of medical staff.

And even with spending increasing, the outlook just seems to get bleaker. In 2000, 51 per cent of respondents in the general public said their confidence in the system was falling. Last year it was 54 per cent. Now it’s up to 58 per cent—including an unsettling seven out of 10 in B.C. Which may explain why fully three-quarters across the country say they expect a solution will cost Canadians even more. A significant 56 per cent even say they are willing to pay more—out-of-pocket or through a dedicated health tax—just to maintain the current level of care.

Experience has convinced some respondents there must be a better way. In 1998, at age 28, Calgary engineer Vicki Werner was rear-ended in her car. Long waiting times meant she couldn’t see a specialist for her sore back and neck. Instead, she says, she was repeatedly given prescriptions for painkillers and sent on her way. It wasn’t until Werner went on long-term disability in July, 2000 that she got to see a neurosurgeon—thanks to her employer’s insurance company—and learned she had a herniated disc and bone spurs growing into a nerve in her back.

Her recovery, she learned, would have been much faster if she hadn’t had to wait so long to see the specialist. So count her among those who think Canadians should be allowed to buy earlier access to health services. “If there had been a way I could have paid to see a neurosurgeon quicker, I

would have done it in a flash,” says Werner, who’s now back to work part-time. “If I can pay, it might free up a spot for someone else.”

Most poll participants also believe a program of promoting wellness and preventing disease would take pressure off the system—even if it means diverting funds from existing services. Kelowna, B.C., physician Mark Fromberg estimates that lifestyle improvement—exercising regularly, eating properly, minimizing stress and avoiding tobacco and other toxins— could prevent 30 to 60 per cent of illnesses. But the system generally pays doctors for services provided, not for teaching patients to avoid services. “We don’t have a health-care system, we have a diseasecare system,” Fromberg complains. “Why don’t we educate people before they need help?”

In follow-up interviews, respondents repeatedly complained that too many people make unnecessary visits to their doctors. “I sometimes can’t believe what people come in for,” says Fromberg. He thinks it would be “stupefying” to add up the millions of dollars spent diagnosing sore throats each year. “The health-care system,” he says, “is being nickel-and-dimed to death.” Dixie Young, 57, of Waasis, N.B., a vegetarian who does Tai Chi, meditates and recendy gave up smoking, thinks people have to learn to take more responsibility for their own health. “They go to the doctor and want a quick fix,” she says. “That’s not wellness. That’s just getting you through from day to day.”

Among possible means of addressing systemic pressures, respondents generally like an approach already in effect in some communities: allowing nurse practitioners to handle relatively minor ailments without getting a doctor involved. A coordinated team response like that can achieve similar results, at a lower cost. Sixty-one per cent of the public, 60 per cent of doctors and—not surprisingly, as it makes better use of their talents—77 per cent of nurses like that plan. “Somebody else could do part of what I do, no doubt about that,” says Dr. Bernard Séguin, a rural physician in Clarence Creek, Ont., near Ottawa. “In the long run, that would be cheaper.”

Pressure on caregivers is one issue. Equipment shortage is another. Dr. Helen Nadel of Vancouver is one of a handful of

physicians in the country who specialize in three areas—diagnostic radiology, nuclear medicine and pediatric radiology. Million-dollar-plus PET (positron emission tomography) scanners are the best way to diagnose and evaluate the tumours she encounters in her young patients. But there are no publicly funded PET scanners anywhere in B.C. So when Nadel’s patients need a scan, she has to

tell their parents they can either pay $2,500 for one at a private PET facility in Vancouver, or go out of province or out of country to get it. “There isn’t a week that goes by,” she says, “that I don’t say that to the parents of one or two children.” If more money is the answer to health-care woes, are Canadians willing to spend the amount it would take to create the health system they want? 03

GETTING A FIX ON ATTITUDES

The fifth annual Health Care in Canada survey was conducted by the Toronto-based polling firm Pollara Inc. for the Kirkland, Que.-based pharmaceutical maker Merck Frosst Canada Ltd. and a group of partners. A total of 2,000 people participated in the national telephone survey between March 27 and April 16-1,200 members of the public and 200 nurses, doctors, pharmacists and health-care managers. Responses from the public are considered accurate to within 2.9 percentage points, 19 times out of 20. The margin of error widens to 7.1 percentage points for

responses from the professional groups. 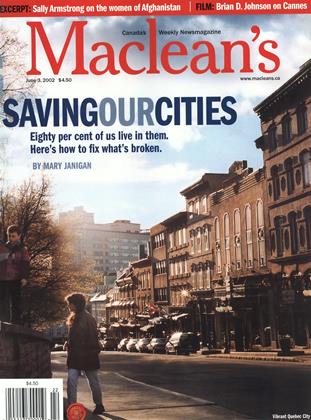