Harrison Ford is no barrel of laughs. In fact, in the midst of a media blitz for his latest movie, K-l9: The Widowmaker, he’s downright grumpy. Consider his clothes: the rugged 60-year-old movie star ambles into a Four Seasons hotel room, dressed entirely in black—trousers, golf shirt, socks, shoes. The only twinkle in this man is the silver hoop in his ear. He reluctantly offers his hand in greeting, and while talking gazes out the window. When asked what was challenging in his role (Ford plays a Soviet captain in a leaky nuclear missile submarine during the Cold War), he has this to say: “Can’t think

of anything. Acting isn’t brain surgery.” Ford has dozens of interviews scheduled during the one day he’s in Toronto. So, how about a change of pace: other than the film business, what’s on his mind these days? “Nothing,” he replies. “Movies. That’s what I do for a living.” OK. Different tack. In the film, Ford’s character makes some questionable decisions that risk the lives of his men. Was it difficult not to judge his character? “No. It’s discipline.” What does he lose himself in? Flying, Ford answers. Aha! Did he fly to Toronto? “No. Too tired.” Well, Mr. Ford, you’re not the only one. AMY CAMERON 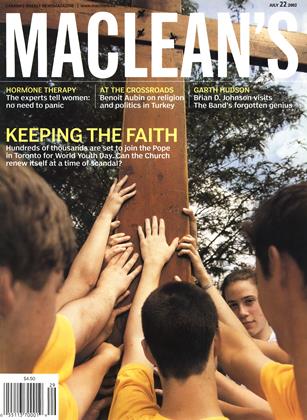