It’s remarkable what staying calm and a bit of luck can do for you. Last summer, Charles Stern of Mississauga, Ont., was at his Muskoka cottage. Belle, the family’s Jack Russell terrier, was with him. Stern was cutting wood with a chop saw perched on a workbench. A plastic guard covered most of the circular blade, except for a small gap at the back. He made a cut and turned to go, allowing the spinning blade to come to a stop on its own, as he would normally do. Suddenly—a yelp. Stern spun, and there was poor Belle, bleeding profusely. Turns out, Belle hates loud noises, whether it’s a lawn mower, chainsaw or vacuum cleaner. “She’ll run up to it,” says Stern, a 39-year-old Toronto police officer, “and virtually take a chunk out of whatever it is.”

Belle had jumped a metre in the air to bite the annoying blade. Her bottom jaw

was hanging by a thread. Stern grabbed Belle, washed the wound and wrapped her head and jaw in a towel with ice. He borrowed his neighbour’s car and sped off. “I had no idea where there was a veterinarian,” recalls Stern. Seven kilometres later, just outside Gravenhurst, a policeman directed Stern to a clinic where, as chance would have it, a surgeon was visiting. He gave Belle a couple of shots before wiring her jaw back in place. Less than two days later, Belle was home again, her head swollen to twice its size, her tongue miraculously intact. Two weeks after the accident, Belle was able to open her mouth wide enough to grab her ball. She still hates loud noises, maybe even more now. But the only long-lasting effect, says Stern, is Belle’s jaw is shorter by the thickness of a saw blade. “It was one of those experiences,” he says, “that show you how easily doing everyday things around the house can lead to something SO devastating.”

‘Belle hates loud noises, she’ll run up and take a chunk out of whatever it is’

In his new book, Koba the Dread, Martin Amis reacts to the death of his father and sisterby focusing on Stalin’s Terror. He presents an interesting summary of Soviet atrocities and ponders why intellectuals in the West are so attracted to Communism. 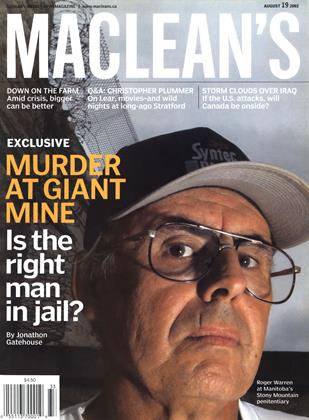