HAVING A NICE SUMMER? It’s hard to imagine how: read a newspaper, watch TV, surf the Web, and you soon get the impression that the world is coming to an end. It’s enough to make a person want to weep and hide. But where? Curl up at home and crank the air conditioner? Forget that—with hot weather straining our power grids, we’re being asked in many parts to set the dial at 26 C or higher. So fine, let’s make the best of it and enjoy the outdoors. Oops, out of luck there, too, with all that eye-burning, throat-searing smog. Flee the city for pastoral tranquility? Maybe not around Georgian Bay, a popular Ontario vacation spot: the local massasauga rattlers are biting more than usual, perhaps because of the heat. And with water levels down in many places, the cottage dock looks like a diving platform for a mud bath. Everywhere you turn this summer, there’s another scary story.

Summer marks the traditional silly season in the news business, and this year, it seems harder than ever to sort out the hype from the truly harrowing. When the usual news sources dry up for the summer, we reporters wipe the sweat from our furrowed brows and go looking. What we invariably find is nasty stuff, like the mosquito-borne West Nile virus. More ink than blood has been spilled over this more-often-than-not benign infectious agent. For all the fuss, it’s still extremely rare, tends to produce fairly mild, flulike symptoms, and—although potentially fatal to the elderly and frail—has yet to kill anyone in Canada. Still, this misunderstood virus out of Africa seems to make the news every other day. Maybe it’s the African connection, but we’re not talking Ebola here.

On the other hand, people should be more worried about what they’re spraying in Winnipeg to kill the skeeters. They call it fogging: trucks roll into neighbourhoods and lay down a cloud of the pesti-

cide malathion. It takes out mosquitoes, all right, but what else does it do by way of long-term side effects? No one knows for sure.

Maybe a couple of fish stories will take our minds off the gloom. Heard the one about the giant Asian carp? Big suckers. Most reports begin with a menacing description: Asian carp can weigh over 45 kg (bigger than a small child), reach more than a metre in length, jump three metres in the air if startled, and eat up to 40 per cent of their own body weight in plankton and vegetation a day. They lay eggs in the hundreds of thousands. And they could be coming to a lake near you.

Asian carp now skulk around in the Mississippi River system after escaping from Arkansas catfish farms in the early 1990s. Now there’s a possibility they’ll enter the Great Lakes through a canal connecting the Mississippi and the lakes at Romeoville, 111. The environmental havoc they could wreak reads like a sci-fi alien invasion. With their huge appetites, they could wipe out species by depriving them of their food. Frightening, but a fact of life, given the human tendency to move plants and animals around the planet.

There’s something inherently menacing about dark, impenetrable water and what lurks beneath. Besides Asian carp, a cold-blooded vertebrate with razorsharp teeth is making the news. Some fool apparently dumped northern snakehead, a delicacy in China, into an old Maryland quarry filled with water two years ago. There are fears that the voracious, metre-

long carnivore, which looks a bit like a toothy eel, might get into nearby Little Patuxent River, and from there, into Chesapeake Bay, where a lot of fishermen count on making a living. The concern seems well-based. This freak of nature can use its powerful fins to—yikes!—walk on land. Thanks to rudimentary air-filtering lungs, it can even survive for several days out of water. Biologists have trapped small fry, suggesting the northern snakehead may now be breeding—and that’s a really bad sign.

How about that weather? It used to be a safe enough topic of cheerful conversation, but no more. David Phillips, a senior climatologist at Environment Canada, is a favourite among journalists. He knows his stuff and can be counted on for a good quote. “It’s almost like there’s a Phillips Index, somebody was saying the other day,” he says. “When they see me doing so many interviews, we must be having weird, wild and wacky weather.”

Sadly, we are. Parts of the Prairies are into their second or third devastating year of drought. All across Canada, health officials have issued a steady stream of warnings about UV, air quality, humidity and heat. We collectively shrug and climb into our SUVs to drive to work alone. If it isn’t clear yet, it should be: global warming caused by burning fossil fuels causes severe weather conditions. That means lots of rain and flooding or heat that bakes farmland hard and dry.

We have no one to blame but ourselves. North Americans represent just five per cent of the planet’s population, but gobble up 25 per cent of world energy reserves, says an unsettling United Nations report released last week. In 1998, we spewed one quarter of the world’s carbon dioxide into the air, and strange weather is the result. Remember that crazy snowfall in parts of Alberta at the end of July? Snow in July, for heaven’s sake! Just south of Grande Prairie, they

were nailed with 20 cm of it. A few days later, Regina and Saskatoon were clubbed by their second-earliest frost in a century after sweating through searing temperatures. And don’t forget hurricane season, which peaks in late August and early September. “We haven’t heard a lot from the East Coast this summer,” says Phillips. “Their time in the sun has yet to come,

and it may very well be within a month.” Climate change—that’s the truly scary one. Another ominous study came from Natural Resources Canada last week, called “Climate Change Impacts and Adaptation: A Canadian Perspective.” Expect our fresh water to continue disappearing if we allow surface-air temperatures to climb, as expected, by as much as

5.8 degrees over the next 100 years, says the report. Receding shorelines don’t just affect boating. As water levels drop, pollutants become more concentrated. Hydroelectric dams are left high and dry. It makes you wonder how a future generation is going to grow its food, find drinking water and power its air conditioners.

Perhaps you’re thinking, then, that you need a vacation from reality, some place like... Europe. Forget it: hotels in Prague are underwater, Czechs are scrambling to save historical treasures, and zoo staff are shooting stranded animals. Parts of Russia, Germany and Austria are also out of the question, flooded by rivers bloated by torrential rains.

And if it’s not the rain and flooding in central Europe, it’s a mammoth, weatherchanging, toxic cloud over southern Asia. The United Nations estimates that the socalled Asian Brown Cloud is three kilometres deep and sprawls across 26 million sq. km from Afghanistan and India through much of China. It is fed by vehicle exhaust, factory emissions, coal-burning power stations, forest fires and woodburning stoves. The cloud blocks the sun, reduces sea-water evaporation and consequently rainfall. Scientists say similar pollution exacerbated previous droughts in Africa that killed more than a million people. The UN thinks the Asian smog bank could lead to the premature deaths of tens of thousands of people from respiratory illnesses. And the cloud can movehalfway around the planet in a week.

Similar clouds hover over South America and the Mediterranean. Southern Ontario has its own, which it was sharing with Quebec last week as the fumes began drifting into the Maritimes. It isn’t difficult to imagine a day when these airborne toxins join together in one massive veil of death. With another Earth Summit on sustainable development set to begin in Johannesburg next week, Canadians might wonder why our government hasn’t acted on the Kyoto strategy for battling global warming, developed at a similar conference in 1997.

For now, though, maybe we should all just go home, crack open a cold one, and think about what we’re doing to ourselves. And with luck, when the steak goes on the barbeque, no one will mention mad cow disease. 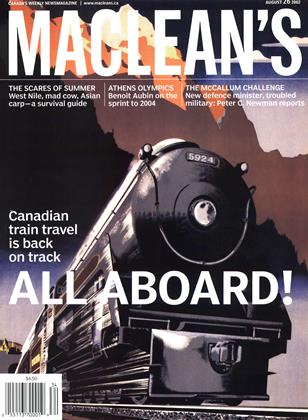