Looking for art in the aftermath Brian D. Johnson September 16 2002

IT BEGAN with images, playing to a vast audience. And as we tried to fathom the reality of what was happening, film was the unavoidable reference point —“it’s like a movie.” At the same time, with thousands of cameras aimed upwards, the destruction of the World Trade Center became the most photographed event in history. Out of the images, an eerie esthetic emerged. It was one of naked metaphorvolcanic eruption from a blue sky, the ashen shroud of nuclear winter, the Iwo Jima pose of firemen hoisting a flag. There would be beauty in the horror, art in the ruins. And in the months that followed, through the polarizing lenses of bereavement and war, culture took on new dimensions everywhere we looked.

In the massive media wake timed to the 9/11 anniversary, it’s hard to find the art amid the hype. But from that first New

Yorker magazine cover, with the twin towers barely visible as black-on-black silhouettes, the tragedy inspired artists. They include poets, musicians, playwrights, comedians, choreographers, architects and independent filmmakers. Their work ranges from The Rising, Bruce Springsteen’s consoling album of elegies and anthems, to Requiem 9/11, a dance version of Verdi’s opera performed at Ottawa’s National Arts Centre last week. And the tone of this new art fills the emotional spectrum, from lachrymose to iconoclastic.

Of course, Sept. 11 found its most banal likeness in the action blockbuster, and Hollywood’s first reaction to the event was embarrassment, as the studios post-

poned or performed cosmetic surgery on movies that suddenly seemed in bad taste. Before long, however, as bombs rained on Afghanistan, Hollywood was rushing war movies into release to slake a thirst for military patriotism. It usually takes more than a year to make a Hollywood picture, so we’ll have to wait for the stories of carnage and heroism in Manhattan to make their way to the big screen. And the taboo against 9/11 exploitation has been persistent enough that the inevitable TV movies have yet to materialize—although this fall’s TV season is overstocked with bereaved heroes (Everwood, Monk) and missing persons (Withouta Trace).

This week, meanwhile, the Toronto International Film Festival—which was stopped in its tracks last year by the terrorist attacks—observes the anniversary

with premieres of three features dealing directly with the tragedy. Two are adaptations of New York City plays. The Guys stars Sigourney Weaver and Anthony LaPaglia in a movie based on Anne Nelson’s hit drama about a journalist writing eulogies of firemen lost in the World Trade Center. Reno: Rebel Without a Pause offers an outrageous comic monologue by a radical New York feminist who, despite the “death of irony,” became the first performer to systematically smash the taboo against 9/11 humour. And the French-produced 11’09”01 puts an international focus on the event with an anthology of 11-minute shorts by 11 of the world’s top directors.

Piers Handling, director of the Toronto festival, says he was unsure how to handle the anniversary at first. “We thought, ‘Will anyone want their films premiered on Sept. 11?’ In the end, all the studios and even the independents and European filmmakers backed away from that day.” But then along came The Guys and H’09”01, and that day’s gala slots were filled. The latter film, however, has already aroused controversy, with Variety attacking it as “anti-American.” Un-American might be more accurate.

Among the 11 shorts, one by Britain’s Ken Loach points out that in Chile Sept. 11 already has a profound resonance—as the anniversary of the 1973 military coup that toppled the elected Allende government, with American support. Provocatively, Egyptian filmmaker Youssef Chahine interviews the ghosts of an American

marine and a Palestinian suicide bomber. Israel’s Amos Gitai offers a scenario of a reporter covering a car bomb explosion in Tel Aviv who can’t get her story on the air because a bigger one is unfolding in New York. And Iranian director Samira Makhmalbaf depicts a schoolteacher in rural Iran trying to explain office towers and cellphones to children who have never seen them. Running through 11’09”01 is a challenge to the notion that America is the centre of the world, or that its tragedy has no precedent. And Handling goes so far as to call the anthology “the first attempt by any group of artists to come to terms with the Why of Sept. 11.”

One 9/11 movie, however, tackles America on its own turf. In Reno: Rebel Without a Pause, the performer known simply as Reno reflects on Sept. 11 with an incendiary wit and a machine-gun delivery. Imagine Bette Midler from her bathhouse days, with Emma Goldman’s politics and Robin Williams’ energy. Reno lived in

Manhattan’s Tribeca district, in the shadow of the World Trade Center, a landmark she never cared for until it collapsed. She talks about being woken up by the impact of the plane hitting the first tower and joining “the nouvelle refugees of Tribecistan ... with YSL luggage.” As her rant expands from the neighbourhood to the nation, this Ground-Zero guerrilla puzzles over the voodoo of patriotism, and her love-hate relationship with America. She also delivers scalding assessments of everyone from George W. Bush (“When he’s not rehearsed, he’s like a drunk trying to act sober”) to Larry King (“the Ed Sullivan of the New War”). She gets away with it because she’s funny, brutally honest—and from New York.

Springsteen, from just across the river in New Jersey, is more reverent, to say the least. With The Rising, America’s rock laureate has sounded pop culture’s most plangent response to Sept. 11. Conjuring an “empty sky” and a ruined landscape of dust and blood, he reduces the tragedy to the loss of a loved one, “an empty impression in the bed where you used to be.” But the man who once saw Ronald Reagan try to appropriate Born in the U.S.A. as a Republican anthem avoids partisan sentiments. Unlike Neil Young, who lashed out with the knee-jerk vengeance of Let’s Roll, Springsteen offers psalms of compassion-empathizing with Islam in the Arabic mantra of Worlds Apart and the suicide-bomber scenario oí Paradise.

Ironically, The Rising’s most evocative dirge, My City of Ruins, is one of four songs on the album written before Sept. 11. Everything is up for reinterpretation. Pre-existing songs, films, books have suddenly acquired new meaning. B. Ruby Rich, a Toronto film festival programmer and associate professor, has already taught a course called “Film After 9/ll”at the Universtiy of California’s Berkeley campus. Rich says she presented cautionary tales such as The Manchurian Candidate {Y)62) and Les Ordres (1974) to “show what happens in a moment of national panic.” She also looked back on movies about terrorism from Battle of Algiers (1965), “which now looks like a recruiting film for alQaeda,” to Born in Flames (1983), which climaxes with an attack on the World Trade Center. Art, like history, has a way of repeating itself. fl 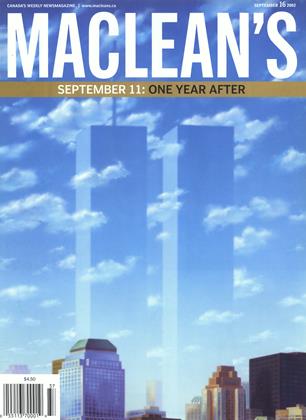