FOR 18 MONTHS, the Odd Couple of Canadian medicare have poked and prodded the health system with rival inquiries. Former Saskatchewan premier Roy Romanow, a seasoned political veteran, launched his one-man Royal Commission into the future of the publicly funded system in April, 2001, at the behest of the Prime Minister. This came as a bit of a shock to Senator Michael Kirby, the coolly pragmatic chairman of the Senate social affairs committee, which had been probing the entire health system since 1999— and which had just issued its first interim report. Minions, on behalf of both Romanow and Jean Chrétien, politely hinted that Kirby should stop. He politely ignored them. So, with mandates that are ever-so-slightly different, the commission and the committee have persisted in their roughly parallel tracks, rarely acknowledging each other’s existence.

So what happens when they both report this fall? Perhaps surprisingly, everybody benefits—especially Ottawa and the provinces, which get thorough, politically feasible choices for reform. Kirby has already issued five interim reports, including an instructive review of practices in other nations. In April, his committee outlined 20 key principles as the intellectual basis for restructuring the system. Next month’s report will translate those principles into concrete steps, put a price tag on that operation—and look at pharmacare and home care. Meanwhile Romanow, with the Canadian Policy Research Networks, has done useful indepth probing of Canadian attitudes and values—so he knows what the public will accept. And he has commissioned three projects and more than 40 papers on such issues as new technologies. When he reports in November, he will lay out, as he has said, “clear, firm recommendations— not alternatives or choices.”

Ottawa has suggested that, in the wake of Romanow’s report, health ministers

could draw up a reform plan which could be signed at a First Ministers’ meeting. But it is possible to figure out where Kirby and Romanow may be going—and how governments might respond:

■ Both men will recommend the infusion of more federal cash into the system. Ottawa committed an extra $23.4 billion in October, 2000, including $21 billion over five years in cash transfers to the provinces. But medicare itself is out of date: it covers only 70 per cent of health costs, largely doctors and hospitals which are an ever-shrinking component of the health system. The money pressures are huge: new technologies, drugs, an aging population, labour, research funds and the cost to restructure the system. Both are talking about billions of dollars.

m Kirby will advocate a limited form of federal pharmacare for those who face catastophic drug costs—and home care for a limited number of days following discharge from an acute care hospital. Romanow will likely advocate broader home care and pharmacare programs.

■ Both men oppose user fees for medically necessary care. Kirby would probably pay for new spending with health-care premiums—or with a dedicated tax such as several percentage points of the GST. Romanow would likely pay for new healthcare costs out of general revenues—as long as the extra tax money was earmarked for health and strictly accounted for.

Kirby doesn’t care if the private sector performs more services-as long as they are publicly funded. Romanow has more qualms.

services—as long as the public sector continues to fund them. Romanow has more qualms about a larger role for private, forprofit providers.

■ Both advocate patient-centred systems. Kirby would institute maximum waiting times for each procedure: if the time is exceeded, the patient could go to another province with full funding. Romanow is reluctant to go that far, fearing this could lead to endless litigation.

■ Both men would create some form of arm’s-length agency representing both levels of government. At a minimum, this agency would act as an auditor general for health by monitoring the quality of care and patient safety. It could also ensure that funds are properly spent.

So what now? Finance Minister John Manley has already warned his colleagues that there will not be a lot of extra cash in 2003-2004. That was a strategic move to dampen public and provincial expectations—and to preserve some funds from predatory fellow ministers for future health initiatives.

The federal government has already concluded that real renewal requires dramatic change. And that means taking account of the fact that many medically necessary treatments are now accomplished with drugs or through procedures performed in hospital day-surgeries which require follow-up home care. So it is likely that Ottawa will offer to fund a very limited form of provincial pharmacare and home care after Romanow reports.

But this is not going to make the provinces happy—because Ottawa will impose strict controls on how those new funds are spent. Federal politicians feel burned: although Ottawa set aside $1 billion for new medical equipment in 2000, the public only remembers that New Brunswick tapped a portion of its share to buy lawn tractors. So Ottawa will insist on a strict accounting—although that could be done by an arm’s-length agency to placate provincial leaders. “The provinces are going to find themselves in the position that if they want the money, they must be clearer on what it is used for,” says an insider. As the Odd Couple outline their differing visions, such debates will dominate the fall agenda. I?1 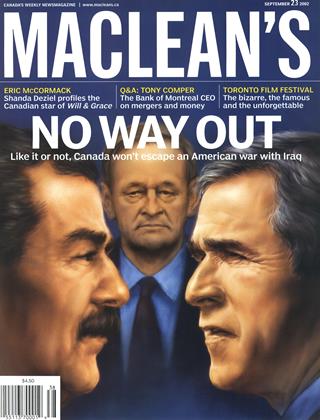