WHAT DO THESE characters have in common—an Armenian painter, an English schizophrenic, an East Indian escort, a Las Vegas sex therapist, an Appalachian serpent handler, a Tokyo seismologist, a Romanian dog catcher, a Chinese child magician, and an American baroness in 19th-century Paris?

They’re all characters in that fly-by-night circus known as Canada’s national cinema. Each year the Toronto International Film Festival launches the new season of homegrown movies—23 features by Canadian directors were showcased at the event’s 27th annual edition (Sept. 5-14). Anyone trying to get a fix on our cultural landscape through the festival lens would see a kaleidoscope of nationalities, from the sari swirl of Bollywood/Hollywood to the Armenian riddle of Ararat. But many of the films not rooted in immigrant cultures or foreign lands seem to take place in a kind of cultural vacuum, a country defined by a basic failure to communicate.

Ours is a cinema of awkward silences. We have movies that fetishize emotional restraint as they exhume the past (Ararat, Spider, Flower & Garnet, Past Perfect,

Perfect Pie, Marion Bridge, La Turbulence des fluides). We have movies that search for meaning on the margins, an exotica of junkies, pornographers, massage parlours, twin male strippers and topless female boxers (Fix, The Wild Dogs, Yellowknife, Rub & Tug, Punch). And, in the great Canadian tradition, we have movies goin’ down the road to oblivion (Gambling, Gods and LSD, Yellowknife, deadend.com).

Which is not to say there aren’t some fine Canadian films in the current crop. Spider, which deservedly won the festival’s prize for best Canadian feature, is a dour but exquisite psychological drama that shows a new maturity from director David

We search for meaning on the margins, a world of junkies, pornographers, massage parlours, topless female boxers

Cronenberg. Employing none of the special effects or shock tactics he’s famous for, Cronenberg spins a web of Oedipal intrigue, drawing uncanny performances from Ralph Fiennes as a paranoid schizophrenic and Miranda Richardson as a shape-shifting enigma from his boyhood.

Spider and Ararat, which had both premiered at Cannes, were the two most prominent Canadian features at the Toronto festival. But in the spotlight of the opening night gala, Ararat drew a more mixed response. Atom Egoyan’s weave of contemporary characters confronting the legacy of the 1915 Armenian genocide presents a fascinating moral puzzle. And his ambitious attempt to fuse historical, aesthetic and personal agendas is hugely admirable. However, while so many of this year’s Canadian films are afflicted by a kind of narrative anorexia, Ararat suffers from too much plot rather than too little. Its Escher-like maze of storylines becomes so conceptual, and convoluted, that the drama tends to get lost in the dust of deconstruction.

Among the smaller movies, the one gem that took my breath away was Flower & Garnet, a remarkably assured feature debut by Vancouver writer-director Keith Behrman. Filmed against a barren landscape in the B.C. interior, it’s a slim but powerful story of a depressed widower (Callum Keith Rennie) who has come to resent his children, a blossoming 16-yearold named Flower (Jane McGregor) and a curious eight-year-old named Garnet (Colin Roberts)—their mother died during Garnet’s birth. It sounds bleak. But Behrman’s intimate direction breathes life into every frame. His images have an eccentric sense of wonder, as if seen through a child’s eyes. As the brokendown father, Rennie gives the most mature and vulnerable performance of his career. And the kids are astonishing— McGregor seems poised to join Canada’s legion of young female stars, behind Sarah Polley and Liane Balaban.

Punch, Vancouver filmmaker Guy Bennett’s feature debut, is another drama of a teenage daughter (Sonja Bennett) and a widowed dad (Michael Riley). Their cozy relationship is not physically incestuous, but it threatens to be when she asks her father, a physician, to give her a breast exam. This is a movie with

breasts on the brain—after the jealous daughter gives daddy’s new girlfriend a black eye, the girlfriend’s sister, who makes her living as a topless boxer, tries to settle the score. If you think that’s wacky, it’s only the half of it. Sonja Bennett, who performs graphic nude scenes, is the director’s daughter. And the director says that while his script isn’t autobiographical, it’s a projection of what “my daughter and I might have become had we not made corrective measures to our relationship.” Whew.

Carolsfeld directs with a sensitive hand. And the film serves as a good vehicle for everyone involved, especially Parker, who gets to play an alcoholic both on and off the wagon. But the story feels as threadbare as the family’s frayed emotions. It’s a shame to see such strong performances lavished on such tired themes, and after a while you find yourself simply watching the actors’ work.

Actor-playwright Daniel Maclvor, who scripted Marion Bridge, also wrote and directed his own feature debut, Past Perfect, a simple two-hander in which he co-stars with Rebecca Jenkins. A shrewdly elegant construction, Past Perfect toggles between two time frames—strangers awkwardly falling in love on a red-eye flight from Halifax to Vancouver, and their relationship foundering two years later. It’s hard to imagine a more Canadian sce-

nario for romance than one suspended in a pressurized cabin between two coasts. And there is something airless about it. Maclvor, who casts himself as a stuffy linguistics professor, never generates convincing chemistry with Jenkins, despite her finest efforts. It’s better when they’re being abrasive, and Maclvor charts their emotional barrens with well-observed detail. But maybe that’s the point. Maybe this is Canada’s astringent antidote to Hollywood formula, a reverse romance about a couple falling out of love.

Past Perfect is also about the imperfection of a childless future—a theme that surfaces again in Perfect Pie, another first feature that cuts back and forth between two time frames. It’s about a reunion between two women in rural Ontario, a mother (Wendy Crewson) who has stayed on the family farm, and an opera star (Barbara Williams) who lives in New York, single and childless. The story flashes back to their youth, gradually unearthing a trauma that has left them both scarred for life. Directed by Barbara Willis Sweete, Crewson and Williams give full-bodied performances, but the story that surrounds them feels meagre. The script, adapted by Judith Thompson from her own play, unfolds as a therapeutic exercise in recovered memory. One more trip down the beaten path to catharsis.

La Turbulence des fluides offers a less conventional tale of a woman coming home to pry a dark secret from the past. Along the lines of recent Quebec films like Maelstrom and Un crabe dans la tête, it has a surreal premise involving water. The charismatic Pascale Bussières plays a Tokyo-based seismologist who returns home to Baie-Comeau on the North Shore of the St. Lawrence to investigate why its tides have mysteriously stopped. Director Manon Briand’s script is hard to swallow, but its originality arrives like a hit of sea air. This, at least, is a movie that takes us elsewhere.

Among other departures from the doldrums of Canadian cinema, Bollywood/ Hollywood is the most flamboyant. Written and directed by Delhi-born Canadian Deepa Mehta (Fire), it’s a madcap musical about a young millionaire who hires an

escort to pose as his fiancée at his sister’s wedding. Marrying Bollywood style with Toronto locations, Mehta creates a giddy pageant of cross-cultural irony. After Monsoon Wedding, this confection pales by comparison. But if My Big Fat Greek Wedding is any precedent, Bollywood/ Hollywood’s sitcom lightness may well be the key to its success.

Two other movies set in immigrant communities, Saint Monica and Long Life, Happiness and Prosperity, are both whimsical tales of young girls seeking divine intervention. In Terrance Odette’s Saint Monica, a Portuguese-Canadian kid befriends a homeless woman who wanders Toronto’s bridges believing she’s the Virgin Mary. It’s as thin, as delicate and as symbolic as a communion wafer. Long Life is fortune-cookie cute—Vancouver director Mina Shum reunites with Sandra Oh (.Double Happiness), casting her as the single mother of a girl who tries to spread good luck by conjuring up Taoist spells.

In a more adult vein, South Koreanborn director Soo Lyu offers Rub &Tug, a skin-deep comedy set in a massage parlour, with Don McKellar cast as its ineffectual manager. And deadend.com offers a raw video diary of a teen trio riding across Canada on a suicide mission. Directed by Toronto’s S. Wyeth Clarkson, this druggy road trip rambles on for 2lh hours. But with its Blair Witch conceit of amateur

realism, and improvised performances, it has a rough charm. The festival’s most revealing look at street life, however, was Nettie Wild’s FIX: the story of an addicted city, a documentary about Vancouver junkies allying with the mayor to fight for a safe injection site.

Some filmmakers looked for their kicks outside the country. Halifax’s Thom Fitzgerald (The Hanging Garden) went to Bucharest to shoot Wild Dogs, about a pornographer recruiting young Romanian talent. And Montreal’s Michael Mackenzie filmed his feature debut, The Baroness and the Pig, in Hungary. Adapted from his own play, it’s about a wealthy American (Patricia Clarkson) who struggles to bring scientific enlightenment to the salons of 19th-century Paris while trying to civilize a wild child raised by pigs—and survive her civilized pig of a husband (Colm Feore). In a modernist double whammy, Mackenzie

While some dramas pry dark secrets from the past, there are documentaries that reexamine the very nature of image-making

uses high-definition digital video to compose tableaus of an age that was just discovering film—his is also the first movie downloaded by satellite and digitally projected at the Toronto festival.

Meanwhile, two remarkable documentaries force us to reexamine the very nature of image-making. In The True Meaning of Pictures: Shelby Lee Adams’ Appalachia, director Jennifer Baichwal looks at a famous photographer whose black-andwhite portraits of hillbillies have been called exploitative. Baichwal intercuts Adams’ gothic photographs with scenes of him at work—documenting activities that range from hog-killing to religious serpent-handling. Without passing judgment, she develops an extraordinary perspective, both moral and aesthetic.

Going further afield, with Gambling, Gods and LSD director Peter Mettler takes a mesmerizing three-hour odyssey around the world in search of transcendence. He delivers a hallucinogenic stream of images—worshippers at an airport church in orgasmic rapture, the demolition of a casino hotel in Las Vegas, a beatific invalid crawling toward the camera in India. Exploring the raw fabric of perception, Mettler finds poetry in a raindrop inching down a car windshield in the desert. With a documentary that is more dreamlike than any drama, he brings Canadian cinema full circle. li1] 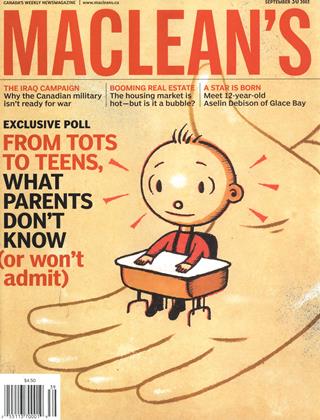