TOO MUCH INFORMATION DONALD COXE January 20 2003

WHAT WILL they consider important about our economy and financial markets?

The pronoun is, of course, the key word in this opening question. They are the economic and financial historians of coming centuries. They will be able to explain what we find unknowable about our economies and markets, because they (1) will know how everything turned out, and (2) will have boiled the story down to manageable length by concentrating on a few major themes and trends that turned out to be decisive. The statistics and events they will cite in their books to explain what happened will be a minute fraction of the mass of data we participants cope with, and argue about, day to day and month to month.

This is the process of distillation—through time—that proves the truth or folly in financial forecasts. If you were to read the output of 10 leading strategists (and I counsel you strongly not to even think of wasting so much time in such a process), you would find they cannot even agree on which factors are crucial to forming a forecast. No wonder most of the big names have not just been wrong—they have been ridiculously, hideously wrong.

Today’s seers have the opposite problem to that faced by previous generations: they must try to process too much information. Each day produces a cornucopia of data, earnings reports, earnings projections and economic statistics from around the world. Few industries use computers and the Internet more intensively than the financial industry, and few groups within the financial community use computer-generated output more than strategists, who know—to the second—the price of everything, but have little thinking time left for appraising the value of anything.

When I came into the business in the 1970s, the information flow was—barely— manageable. Our biggest challenge was getting important information on a timely basis. CEOs rarely discussed their companies’ outlook, earnings reports tended to include

If one doesn’t eat too much and too often, one digests better. If one isn’t asked to explain each day’s stock market behaviour for national media, one may be more likely to reflect on important long-term trends that ultimately define economies and markets.

I formed my habits in the 1970s and haven’t really changed much. I still believe that the difference between winning and losing over any stock-market cycle—let alone over decades—is identifying the three or four underlying forces that drive the market. Daily action is chaos theory—not financial theory—at work, and serious strategists shouldn’t try to predict or explain it. If you concentrate on the big things, then each day’s data will include some information on the trends you’re watching.

For my career, the most important underlying trend has been the ongoing search for a store of value in wealth-building. When the American dollar displaced gold as the global store of value in 1944, a new series of cycles began as people, corporations and governments tried to adjust their strategies for a new era. As Federal Reserve chairman Alan Greenspan told the Economic Club of New York last month, abandoning the gold standard in the U.S. in 1933 led to a seven-fold rise in prices over the next six decades. Much of that inflation occurred during the 1970s, when even liberal economists concluded that democracies couldn’t manage paper currencies with-

Paul Volcker, Ronald Reagan and Margaret Thatcher proved them wrong in the 1980s, showing how monetarism and deregulation could and would drive inflation down to acceptable levels. The end of the Cold War removed the goad of rising military expenditures from the inflation equation, launching a decade of disinflation that soon began to show the stigmata of deflation.

During the 1970s, the American dollar ceased to be a store of value, as did bonds and most stocks. Inflation hedges—commodities such as gold, silver and oil—became the ways to conserve and build wealth.

During the 1980s and 1990s, the American dollar, bonds and stocks once again became recognized stores ofvalue. Commodities suffered two decades of declining value—particularly in inflation-adjusted returns. (Those once-fashionable inflation hedges couldn’t even hold their value against disinflation once the hinge of financial fate turned.)

The late 1990s mania for technology and telecom stocks that has produced the biggest Triple Waterfall crash in history infected equities generally, so stocks became a suspect store of value in the year 2000. Then the market began sorting out the wheat from the chaff, and decided it liked commodity-producing and dividend-paying stocks, but remained averse to those “growth” stocks that had become incredible shrinking stores ofvalue.

Deflation (the Japanese disease, which is being transmitted globally by the great Chinese export machine) has become such a threat to the world that even Greenspan and the European Central Bankers have sworn they will print the money to fight it: deflation, they have finally conceded, can be at least as big a danger to advanced economies as inflation.

My bet is future historians will conclude that the world began to turn from deflation to reflation as the new millennium dawned and the fads of the old one began to die off. The stock market is the most visible and dramatic battleground in this new struggle, with the casualties and survivors reflecting the changes in tactics and weaponry.

Next week, I shall, at the obvious risk of hubris, discuss the ways to make and lose money as the world turns. I?] 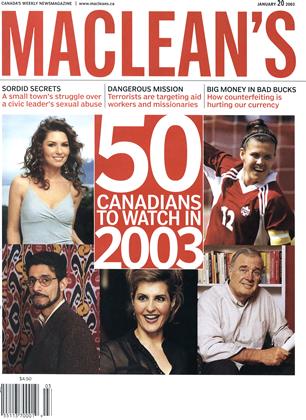