MOMMA, don’t let your babies grow up to be premier. Certainly not in British Columbia, the banana-peel belt of Canadian politics. Here—with the inevitability of gravity, of taxes, of winter rain—supreme leaders are doomed to an ugly comeuppance, usually at their own hand.

Covering B.C. politics is a sad business. The premiers look so darned happy at their swearings-in, one cringes at the naïveté. It’s as though they’re the only ones in the room not to know they’ve won a starring role in an ongoing political tragedy. Inevitably they pledge a new era of politics, and invariably they deliver—finding deep within themselves the unique means of their own demise.

I claim with more sorrow than exaggeration to have spent nearly as much time watching the province’s fallen premiers in court as I have in the legislature. Bill Bennett, premier from 1975 to 1986, was the last to survive a full term in office. Even he, in retirement, needed a good defence lawyer.

Now comes Premier 03-02659, the identifier number Maui police gave an over-refreshed Gordon Campbell after his failed date with the department’s Intoxilyzer 5000. This time it was the spectacular stupidity of driving drunk after three martinis, dinner and much wine at the Hawaiian condo of Canadian friends. But, hey, it’s always something.

The breath test, which Campbell finally released five days after news of his arrest broke in Canada, topped out at an impressive blood-alcohol reading of 0.149. That’s almost twice the legal limit, in Hawaii and B.C., of 0.08, or 80 milligrams of alcohol per 100 millilitres of blood. Mothers Against Drunk Driving estimates that amount is equal to 14 standard drinks, which explains why Campbell was apparently oblivious to his erratic driving. A Vancouver TV station dispatched a reporter to a local bar to film a hapless customer consuming an equivalent amount in martinis. Not a pretty sight.

Canadian government—came with the ultimate ugly souvenir. His much-reproduced mug shot gives the opposition a dandy campaign poster (“This man is driving the economy?”). His dazed visage already graces shirts, coffee cups and barbecue aprons. Some of the proceeds are slated to fight provincial cuts to health and social services— proving, if nothing else, that his socialist critics have more entrepreneurial flair than Campbell ever credited them with.

The premier had been vacationing alone after his wife, Nancy, returned to her job in Vancouver. Back home, Campbell marked his 55th birthday on Jan. 12 with a news conference drenched in exquisite agony. He’d reached the pinnacle of his ambition after almost 20 years in public life, only to risk it all on a foolish 17-km drive to his Hawaiian resort. Before an overheated throng in the Vancouver cabinet offices, he tried to explain the inexplicable—not just to B.C.’s often hostile press corps, it seemed, but to himself and his wife, standing ramrod stiff and inscrutable at his side.

Nancy, looking every bit the school viceprincipal she is, learned of her husband’s arrest from media reports—as did his caucus and the rest of the province. Days later, Campbell was still at a loss to explain this massive secondary lapse in judgment. His shoulders sagged with the weight of the question. He was trying to rush back to Vancouver, he replied, to deliver the bad news in person. It was a painful lesson, one learned by previous bloodied office-holders who tried to swim with the sharks circling: gone are the days of controlling the agenda.

Few doubt the sincerity of his pain. His eyes welled, his voice wobbled at that first, sad news conference. A veiled reference to his father—a doctor and academic whose battle with alcohol led to his suicide when Campbell was a teen—ripped at the heart. “I have experienced within my own family, in the most painful way possible, the consequences of excessive drinking,” he said,

struggling for control. “And that is what makes my actions in this instance all the more disturbing and disappointing for myself and for those who know me.” Disturbing, yes, yet somehow almost tragically, inexplicably, preordained. Only the means of destruction varies from premier to premier. Glen Clark got nailed for building a deck; Campbell just got hammered. It was Dan Miller, a delightfully forthright New Democrat, who once called the premiership the most dangerous job in the province. He should know. Miller was the caretaker premier who filled the ugly void after Clark was forced from office in 1999. Socred Rita Johnston in 1991 and New Democrat Ujjal Dosanjh in 2000 also assumed

thankless roles as interim premiers. They, at least, were spared from great expectations; their scandal-plagued parties were already destined for electoral doom.

There’s no forgiving in B.C. politics. No going back. Bennett retired, only to be charged in private life with insider trading, along with his brother Russell and lumber baron Herb Doman. All three were acquitted of criminal charges of dumping shares, but all were sanctioned by the B.C. Securities Commission for the offence. Bill VanderZalm in 1991 and later Clark were both forced to step down to fight criminal breach of trust charges that they’d used the premier’s office for personal gain. Both were ultimately acquitted by judges who deemed their actions foolish but not criminal. Clark, however, was found to have breached sections of the legislature’s conflict-of-interest act. The Liberals could hardly conceal their glee in assessing him $53,000—a share of the cost of the conflict probe. It was typical B.C. gotcha politics, now returning to bite Campbell in the rump.

Then there’s straight arrow Mike Harcourt, forced from office in 1996. He paid

‘I have experienced within my own family, in the most painful way possible, the consequences of excessive drinking’

the political price for a charity bingo skimming scandal perpetrated by others to build an NDP slush fund. Harcourt, who survived the party debacle to become a respected provincial statesman, is now relearning to use his limbs after almost dying on Nov. 30 in a disastrous fall from his cottage deck.

The premier’s job in recent decades comes equipped with a built-in curse. Yet Campbell is only the latest bit of damaged goods to cling tenaciously to the prize, declaring an obligation to fulfill his party’s agenda. That mandate, inevitably, is the gutting of the previous government’s legacy.

Campbell may pull it off. There’s no obvious successor in the Liberal wings, and

no opposition capable of forming a government. Still, lingering political wounds in B.C.’s hothouse climate tend to turn septic. Polls conducted in the aftermath of his apology offer a mixed message. The public is split about whether he should resign. About two-thirds said they accepted his apology. As telling, however, was a question Ipsos-Reid polled for CTV. Asked whether Campbell was a “hypocrite” who would have demanded the resignation of anyone else in the circumstances, a solid 74 per cent agreed.

Campbell in opposition was a relentless Calvinist, ruthless in his hellfire condemnation of those failing his moral standards. Campbell in power had even less time for the weak and misguided who disagreed with his mission. Now, his long-term survival requires more than his obvious contrition. It needs a seismic shift in personality: a display of the same compassion and empathy he’s asking of the electorate.

That’s a tall order in B.C., where polarized politics breed doctrinaire leaders. The kind of premier, in short, who blows up real good. fil 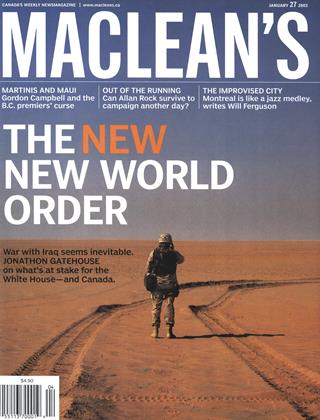