I Don’t touch the Barenaked Ladies

Dear Warner Bros.; I hope you don’t mind me writing to both of you at once. Thanks so much for the free Barenaked Ladies CD, and for the very thoughtful letter that came with it. How are you holding up? I’m so sorry to hear about your recent troubles with pirates. Let’s hope you catch them before they steal any more of your music.

I was honoured to receive a special “watermarked” copy of the new CD. Is this like a limited edition? If so, I’m not sure what to do with it. Your letter warns me not to copy it, or play it on my computer, or upload it to the Internet. You also tell me not to “allow, or make, the CD or any part of it available on the Internet,” which seems to amount to the same thing. The letter goes on to say, “You agree that you will not lend this CD to anyone, and that you will only use this CD for promotional purposes and will play the CD only for authorized individuals in connection with those promotional purposes.”

Well, I’m dying to hear this new album from the Barenaked Ladies, because they’re so droll and musical, and they live in my Toronto neighbourhood, and I hear they’ve recorded a song about people jumping off the Bloor Viaduct, which used to happen a lot before the city put up big steel barriers. In fact, I wish I could listen to the CD right now on the office computer that I’m using to write this letter. It’s so nice to slip on a pair of headphones and listen to music at work, especially if it’s music that I’m writing about. But you’ve made it pretty clear that putting this special watermarked disc into my CD drive would be inadvisable. I could listen to it at the gym on my iPod, but that’s a computer, too, isn’t it? So you wouldn’t be very happy about that.

I guess you’d prefer if I played it in the privacy of my own home. Fortunately, we do still have a stereo (although I hear that soon we’ll be listening to everything on computers). The problem is, I don’t live

alone. If I play the CD at home, my wife is bound to hear it, and you’ve asked me to play it only for “authorized individuals.” She’s not authorized! Actually, I find the best place to hear music is in the car, and I’m going on a road trip this weekend. But again, I won’t be alone—perhaps my wife would agree to wear earplugs. That sounds risky, though. Some sound might seep in, and I’m sure that’s how piracy starts. One minute you’re humming a tune that you overheard somewhere, and before you know it, it’s on the Internet.

Just to be safe, I could listen to the CD only when I’m home alone. Yet there’s one thing that still worries me. Your letter instructs me to “only use this CD for promotional purposes,” which seems a little restrictive. Are you sure you don’t mean emotional purposes? Those Ladies have some catchy tunes, and if I suddenly found myself dancing...

well, that’s not exactly promotional, is it?

So I’ve decided the whole thing is just not worth the risk. I’m going to put my special watermarked CD away in a locked drawer—don’t worry, I won’t leave it lying around. That way nobody will get hurt. I’m aware that the war on piracy, like the war on drugs and the war on terrorism, will not be easily won. We all have to make sacrifices, and I’m willing to do my part. 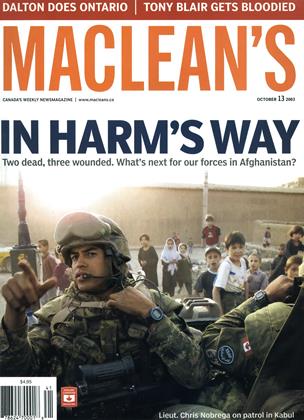