“WE NEED EVERYONE TO GET INTO THEIR NAKED COSTUMES so we can do the transition from the gentle orgy to the finale.” Now there’s a request you don’t hear every day. We’re at a rehearsal for Zumanity, Cirque du Soleil’s bold new cabaret show in Las Vegas. It has been playing as a work-in-progress for five weeks at the New York-New York Hotel and Casino, but on the eve of its gala premiere, co-director Dominic Champagne is trying to work out some kinks, and put some in. He wants to make the climax more... climactic. It’s a complex sequence. A bathtub rises out of the stage, straddled by a blond bombshell who slides and flips like a bar of soap through the arms of a black hunk with a mohawk. They’re naked but for a G-string and jockstrap. As they writhe around the tub in a devouring dance, and douse each other with milk, they’re encircled by

On the Vegas Strip, where silicone is as ubiquitous as neon, there’s nothing new about burlesque, even artful burlesque.

say that Las Vegas has never seen so many small-breasted showgirls: Zumanity is a silicone-free zone, offering an ecumenical brand of burlesque that embraces a myriad of body types.

“You’ve got all these shapes and sizes— voluptuous, thin, tall, small,” says Vanessa Convery, the Canadian ballerina-turnedbath-dancer. Born in Montreal, and trained by the Royal Winnipeg Ballet, Convery danced with Les Grands ballets canadiens and Les Ballets jazz de Montréal before running off to join the Cirque. “Ballet is a cookie-cutter world,” says the 32-year-old dancer. “You’re all the same weight and height. I’ve always been the beautiful princess on pointe shoes. Now I’m playing a cross between Marilyn Monroe and Pamela Anderson. I’ve really come out of my shell.”

Joey Arias, the drag queen who hosts Zumanity, has gone the other direction, from playing sexual iconoclast in Manhattan’s gay underground to lending a kiss of authenticity to Cirque’s new cabaret brand. “I wasn’t sure about Cirque at first,” he admits as he sits at the mirror, applying eyeliner with a practised hand. “I thought maybe I was too avant-garde for these people. Their shows are really straight, basically.” Arias, who

won’t reveal his age, has an impressive pedigree among the New York art crowd. “I knew Andy [Warhol] and Salvador Dalí and worked with David Bowie. When we all started performing, Madonna was part of my gang. Everybody made it but me. I’m the most unfamous famous person.”

And infamous. Arias recalls being jailed after a 1991 performance in Paris, in which he had sex with a man from the audience while another performer “squirted milk from her breasts and pulled 32 yards of pantyhose from her vagina.” But amid the more tasteful stunts of Zumanity, Arias still feels he can be himself. “The magic is there, inside of me,” he says. “It can never be sanitized. Las Vegas is not going to change that. We’re coming here to give the finger, to switch the gears from Fun City to Sin City. That’s my job, to turn people on.”

SATURDAY NIGHT. The gala premiere. I walk through the Art Deco theme park of New York-New York’s make-believe Manhattan, past the burbling slot machines, down a fast-food alley of fake Soho storefronts (bookstores with no books)—and step into the art nouveau dream world of the Zumanity

theatre. The lobby is like a boudoir, the walls padded with red velour. Peepholes offer furtive glimpses of blackand-white flesh. At the urinal, voices from the wall whisper sexual innuendo. The theatre itself, plush with more red velour, wraps around a curvacious thrust stage. Its designer, Stéphane Roy, describes the style as “fallopian.”

The show begins with a comic band of pilgrims protesting “the appalling debauchery” that we are about to witness— “beware the stirrings of lust in your nether regions.” A parody of American puritanism to soften up the crowd. But the premiere audience is by no means typical. Sitting in the front row is the Dick Clark of debauchery, the prince of darkness-lite himself— Hugh Hefner, flanked by six blond playmates. “Gawd,” says Joey, drinking them in. “Such delicious Barbies... you girls look like candyl”

The show unfolds as a swirling hybrid of circus, cabaret and burlesque. A Senegalese dancer draped in beads ignites the room

All Cirque shows are sexy, but when sex

is the subject, not the subtext, we feel we’re not as aroused as we’re supposed to be. In the end, this warmly entertaining spectacle aims for the heart, not the groin—saving the last dance for a sweet elderly couple of circus veterans. Zumanity is being promoted as “another side of Cirque du Soleil.”

But it takes risks and plays it safe, like a high roller careful not to lose sight of the stakes.

The same could not be said of the post-premiere party. During my years in the trenches of show business, I’ve attended more lavish parties than I care to remember, but nothing anywhere near as spectacular as the extravaganza mounted for Zumanity’s opening. It was staged on the ninth-floor roof of the New York-New York parking garage, which was covered with a red carpet and surrounded by kiosks where chefs from the best Vegas restaurants assembled gourmet constructions, like Buddhist monks bent over sand sculptures. Champagne, vodka and tequila flowed until dawn. In white-draped alcoves, Cirque massage therapists dished out complimentary treatments. Violinist babes played for dominatrix fire dancers. There was everything but drugs and hookers. But there were hookahs. In a Moroccan den, guests were invited to pull up a hassock and suck on water pipes of jasmine-flavoured tobacco. On a white stage, a trio of painted nudes struck tableau poses, while a dancing man in a white suit created an action painting on a large canvas, his bare feet slippery with colour as he used the floor for a palette.

This was a party where the height of highheeled fashion was lingerie and stilts. And it was a two-tiered soiree. Cirque owner Guy Laliberté, the former fire-eater who built an empire from the streets of Quebec, held court in a VIP section on a scaffold overlooking the dance floor—proof that, despite its bohemian roots, the Cirque has spawned its own elite. But if Laliberté wanted to rise

above the party, it was his privilege. After all, he was footing the bill, which was reported to be as high as $1 million. After midnight, a glowing helium balloon rose into view, trailing a pair of red ribbons that an acrobat used to twist her way into the night sky. Later we looked up to see a giant crane hoisting a “human mobile” high above our heads: seven martial drummers in whiteface hung suspended from a series of balanced armatures—with a trapeze artist twirling at its apex. It was 2 a.m. The party was just getting into gear, and would not end until 9 a.m.

As the night wore on, the party filled up with performers from all three Cirque shows in Vegas, Zumanity, Mystère and 0. When I dragged myself away, at 5:30 a.m., the dance floor was still packed with circus folkdancers, acrobats, contortionists, all pushing their bodies toward the dawn. Above them, bright against the desert sky, loomed a fake Empire State Building, and a real crescent moon. It struck me that this, not Zumanity, was the true other side of Cirque du Soleil, a wild, irretrievable magic that you might call Cirque de la Lune. lil 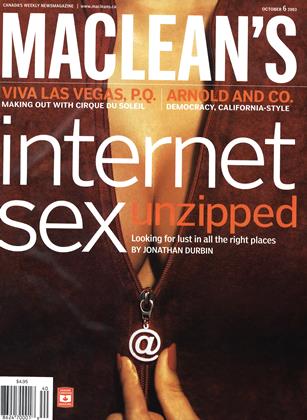